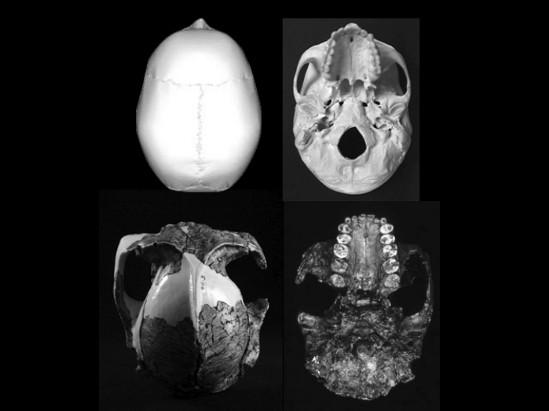 Andalusian researchers, led by the University of Granada, have discovered a curious characteristic of the members of the human lineage, classed as the genus Homo: they are the only primates where, throughout their 2.5-million year history, the size of their teeth has decreased in tandem with the increase in their brain size.

The key to this phenomenon, which scientists call "evolutionary paradox," could be in how Homo's diet has evolved. Digestion starts first in the mouth and, so, teeth are essential in breaking food down into smaller pieces. Therefore, the normal scenario would be that, if the brain grows in size, and, hence, the body's metabolic needs, so should teeth.

However, in the case of Homo, this has not been the case, according to scientists in an article recently published in the journal BioMed Research International. The main author of the study, researcher Juan Manuel Jimenez Arenas, from the University of Granada's Department of Pre-History and Archaeology, points out that, "This means that significant changes must have occurred in order to maintain this trend."

A change in diet, incorporating a higher amount of animal food, must have been one of the keys to this phenomenon. The quality leap in Homo's diet, through a greater intake in animal proteins, fats and certain olio-elements, is essential for a correct working and maintenance of the brain. On a similar note, a larger brain allows greater social and cultural development, which, at that time, led to the achievement of important technological innovations.

In order to validate this theory, the researchers evaluated the relationship between the size of post-canine teeth and the volume of the endocranium in a wide set of primates, among which were found the main representatives of Homo fossils. "Before we started the study, it was well known that, throughout the evolution of humans, tooth-size diminished and brain-size increased. We have established that they are two opposing evolutionary trends that have been linked for 2.5 million years, when our first ancestors within the Homo genus first appeared on the evolutionary stage."

The study's authors also relate these changes to the inactivation of gene MYH16, linked to temporalis musculature, which fell in size approximately 2.4 million years ago. This would do away with an important barrier for encephalization (a hypertrophied temporalis musculature prevents the development of the cranial dome). Likewise, they analyzed their relationship with the inactivation of gene SRGAP2, which helps towards the evolution of the neo-cortex, playing a principal role in human brain development.