Homo erectus was first master of the kitchen: study

Homo erectus was first master of the kitchen: study 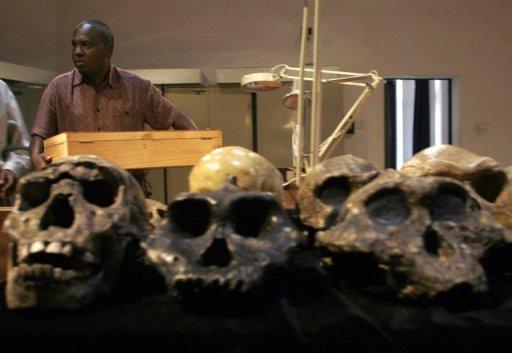 Senior Palaeontologist at the National Museum of Kenya, Frederick Kyalo Manthi, carries the remains of a homo erectus discovered in 2000 near lake Turkana in Kenya in Nairobi in 2007. The first ancestor of modern humans to have mastered the art of cooking was likely homo erectus, which evolved around 1.9 million years ago, according to a US study.

The first ancestor of modern humans to have mastered the art of cooking was likely homo erectus, which evolved around 1.9 million years ago, according to a US study published Monday.

The ability to cook and process food allowed homo erectus, the Neanderthals and homo sapiens to make huge evolutionary leaps that differentiated them from chimpanzees and other primates, said researchers at Harvard University.

Based on an analysis of DNA, molar size and body mass among non-human primates, modern humans, and 14 extinct hominids, the findings in the Proceedings of the National Academy of Sciences support previous studies that suggested homo erectus may have known how to cook.

Preparing food with tools and fire meant more calories could be consumed and less time needed to be spent foraging and eating. Molar sizes shrunk while body mass increased.

"Homo erectus and homo neanderthalensis spent 6.1% and 7%, respectively, of their active day feeding," said the Harvard study, adding that modern humans spend 4.7% of their days eating.

"Human feeding time and molar size are truly exceptional compared with other primates, and their oddity began around the start of the Pleistocene," said the study, referring to the epoch that began about 2.5 million years ago and ended 11,700 years ago.

Cooking may actually have originated with other species that also lived in Africa and came just before homo erectus, including homo habilis and homo rudolfensis, the study said.

In any case, the tools and behaviors necessary to support a cooking culture "related to feeding and now necessary for long-term survival of modern humans evolved by the time of homo erectus and before our lineage left Africa."