This photo mosaic of the recently unearthed Maya frieze in the city of Holmul was digitally stitched together from hundreds of high-resolution photos by team member Alexandre Tokovinine, a Maya epigrapher at Harvard University.

The frieze depicts three human figures wearing elaborate bird headdresses and jade jewelry. They are seated cross-legged over the head of a Maya mountain spirit. A cartouche on their headdresses identifies each of them by name. The central figure's name is the only readable one: Och Chan Yopaat, meaning "the storm god enters the sky."

Estrada-Belli and his team speculate that Och Chan Yopaat may have been the leader that the Naranjo king, Ajwosaj, established as the ruler of Holmul after wresting the city back from the Tikal dynasty.

Stuart, of the University of Texas, said he agreed with this interpretation. "This frieze features a ruler we've never seen before in the historical records," he said. "He's the one portrayed in the center, and it's reasonable to guess he was a local ruler of Holmul, and an ally with the more powerful kingdom of Naranjo to the south, which in turn had its political connections to the [Kaanul kingdom]." 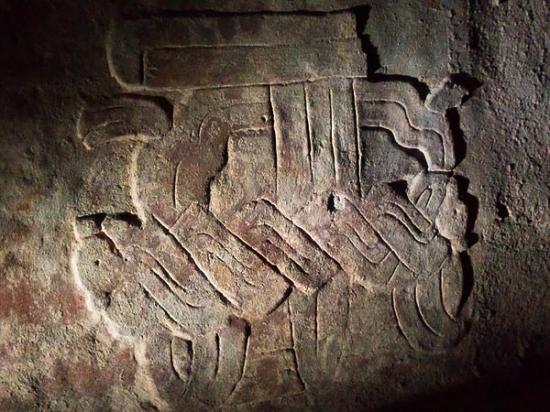 This close-up view shows a large hieroglyphic emblem that decorates the side of the building where the Maya frieze was discovered.

The emblem identifies the building as a royal lineage house that was probably dedicated to local rulers who were worshipped in the city as gods, Estrada-Belli explained. 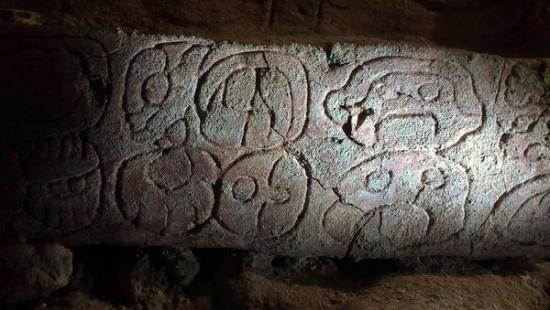 A detail of the section of the inscription that runs along the base of the frieze is shown in this photograph.

The message includes an unusual Maya verb that means "he put in order," followed by the name of an obscure deity that Estrada-Belli and his team speculate was a local patron god associated with the Kaanul dynasty.

"This inscription tells us that there were a number of rituals involved in reestablishing the [Kaanul-affiliated dynasty in Holmul]," Estrada-Belli said.

"The verb 'to put in order' seems to indicate that a number of gods, and especially local patron gods, were reestablished after previously being deposed by [the Tikal] dynasty."

It wasn't uncommon for Maya city-states to "capture" the local gods of those they conquered, explained Tulane University's Canuto.

It was a way of saying, "I hold your patron deity in my hand, so you do what I say." 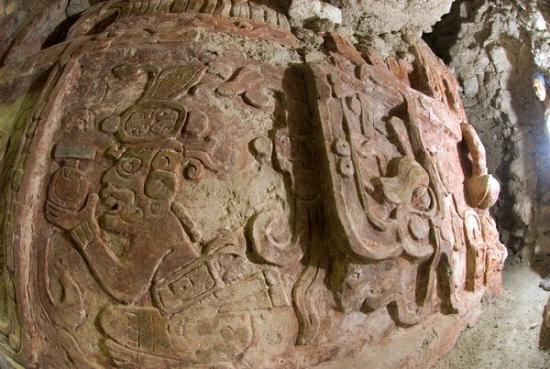 An ancestral deity holds a sign in both hands that reads naaah waaj, or "first tamale"—a reference to a sacred food offering—in this view of the south side of the frieze.

Visible behind him is the head of a large feathered serpent. Scrolls on the body of the serpent identify it as a sacred spirit emanating from the mouth of the mountain, the birthplace of the ancestral figures of the Homul dynasty, Estrada-Belli explained. 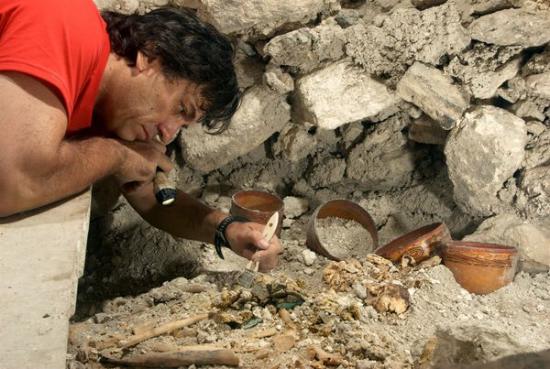 Estrada-Belli carefully brushes debris from an adult male skeleton of a member of the ruling class of Holmul. The body was buried in a tomb beneath the steps leading to the building that contained the frieze.

The Maya routinely built newer structures upon the remains of older ones, both as a way to save time—since the foundations were already in place—and to preserve a sense of continuity of purpose, Canuto explained.

"Buildings were places where things happened—where people were buried and rituals were conducted—so they gained a sense of sacredness that was special and had to be preserved," he said. "So subsequent buildings might have been later expressions of those same rituals."

The skeleton and his associated ceramic offering were preserved by large limestone slabs that kept the tomb free of debris. His incisor and canine teeth had been drilled and filled with jade beads. The decayed remains of a wooden mask were found on his chest.

"While we can't be certain of the identity of this individual, the frieze and inscription provide many possible names and a ton of historical information associated with him," Estrada-Belli said.