Communicated by the Israel Antiquities Authority

A large and beautiful mosaic floor and a church were uncovered in excavations carried out by the Israel Antiquities Authority at Hirbet Madras in the Judean coastal plain - possibly the residence and tomb of the prophet Zechariah. 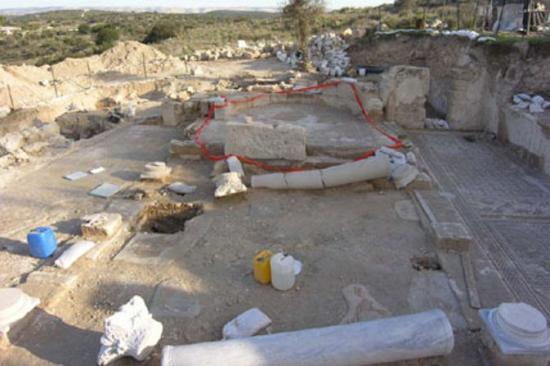 A large and beautiful mosaic floor and a church were uncovered in excavations carried out by the Israel Antiquities Authority at Hirbet Madras in the Judean coastal plain. Various scholars who visited the site during the excavation proposed identifying the place as the residence and tomb of the prophet Zechariah.

In recent months an archaeological excavation was conducted at Hirbet Madras in the wake of an antiquities theft during which robbers attempted to breach and plunder an ancient underground complex.

Hirbet Madras is known as the site of a large, important Jewish community from the Second Temple period until its destruction during the Bar Kokhba Revolt in 135 CE. Among the remains at the site are those of buildings, caves, agricultural installations and extensive underground hiding tunnels. The site was identified by a number of scholars as the location of a major community.

Research of the site was begun in the late 19th century and continues until the present. In the 1980s, a lintel bearing a unique decoration was discovered at the site. Due to the similarity between it and an identical lintel from the Hirbet Nevoraya synagogue in the north of the country, Professor Amos Kloner and the late Dr. Zvi Ilan put forward the theory that an ancient Jewish synagogue is located nearby. 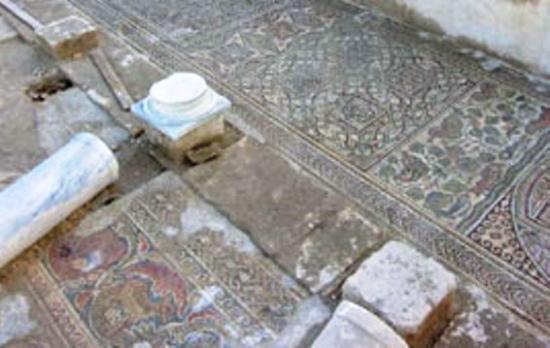 The church, in its last phases, was built as a basilica, at the front of which is a large flagstone courtyard from which worshippers passed into an entry corridor. Through a shaped opening one enters into the nave where there were eight breathtaking marble columns that bore magnificent capitals which were specially imported from Turkey. At the end of the nave is a raised platform and on either side of the nave are two wide aisles

All of the floors in the building were adorned with spectacular mosaic floors decorated with faunal and floral patterns and geometric designs that are extraordinarily well preserved. Located behind the platform are two rooms, one paved with a marble floor and the other that led to an underground tomb devoid of any finds. Branching out beneath the entire building is a subterranean hiding complex in which there are rooms, water installations, traps and store rooms. This complex belongs to the large building from the Second Temple period which the Byzantine church was built into. Among the artifacts discovered in the hiding complex are coins from the time of the Great Revolt (66-70 CE) and the Bar Kokhba Revolt (132-135 CE), stone vessels, lamps and various pottery vessels that are characteristic of the Jewish population from the community at that time.

For the past month the Israel Antiquities Authority has been engaged in uncovering the magnificent structure, unraveling its secrets and preserving the mosaic floors. In the coming days the spectacular mosaics will be covered and the planning process will begin for the conservation of the site and its future presentation to the public, as one of the sites selected to be included within the framework of Prime Minister Benjamin Netanyahu's national heritage project -