The complete caliga imprint and 3D scanning of its cast (photo M. Eisenberg).

The archaeological sites of the ancient Roman Empire constitute without rival the most prolific array of ancient architecture and artifacts that can be attributed to any single civilization or culture. Its remains pockmark the Old World landscape from North Africa and Egypt to Hadrian’s Wall in Britain. The artifacts populate museums the world over.

But comparatively rarely does one find the preserved footprint of an ancient Roman citizen.

That is why excavators and archaeologists got excited when, while digging at the site of Hippos-Sussita (an ancient Hellenistic-Roman site just east of the Sea of Galilee in Israel), they came across what appeared to be imprints of the soles of Roman soldiers’ footwear within the remains of a Roman defensive bastion structure.

“On the ancient binding material of the bastion rear wall, we noticed to our great surprise a number of imprints that were left by Roman military boots while their owners were walking over the mortar before it had dried [while under construction during the 1st century CE],” related Excavation Director Michael Eisenberg in an article published in Popular Archaeology Magazine. “To be more precise, there were several imprints made by the iron nails (hobnails) of caligae soles—the standard footwear of the Roman army from the 1stcentury BCE until the beginning of the 2nd century CE (from the ordinary soldier up to the level of centurion).”*

More specifically, Eisenberg and his team had discovered one complete sole imprint, along with other partial imprints. “The complete imprint was 24.50cm long and had 29 round impressions,” he explained. “It was a left foot caliga, approximating a European size 40.”*

“The bastion and its imprints raise the possibility that Roman cohorts or auxiliary stationed in Syria were also in charge of building the bastion,” Eisenberg continued. “This is an exceptional case and probably occurred during a time of emergency. Such an emergency may have been in connection with the Great Revolt in the Galilee (66-7 CE).”*

The bastion was part of an elaborate fortification system for defending the Roman-Hellenistic community set atop the imposing plateau-like summit of Sussita Mountain, which rises prominently some 350 meters from the lake level and about 200 meters above its landscape surroundings. From a defensive perspective, it commanded a strategic view of all approaches below it. But in addition to this advantageous defensive position, its Roman defenders also built a fortification wall and towers along the crest, including an outwork system of additional fortification walls, a ditch, and a series of artillery posts that consisted of ballista launchers. “From here most of the firepower was directed toward the most threatening area for Hippos, which was in the direction of the stream flowing south of the mountain and along which passed the ancient road,” stated Eisenberg. “Such a launcher (ballista) of 8m long could have lunched a basalt ball of about 18 kg to a distance of 350m, and indeed some of those basalt balls have been found nearby.”*

The western corner of the bastion over the southern cliff. Y. Vitkalov, an excavation team member, is pretending to support the basalt beam foundations exposed after the mortar had washed away (photo M. Eisenberg). 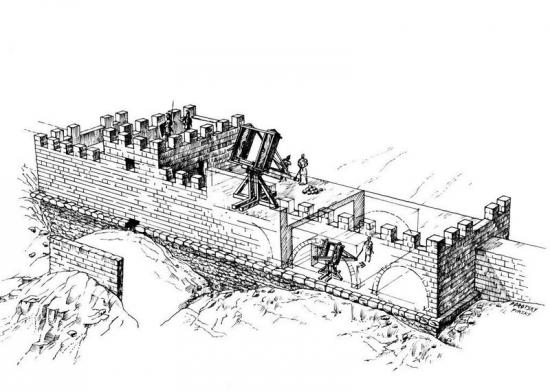 Hippos-Sussita was one of the 10 ancient cities of the Decapolis, centers of Greek and Roman culture, most of which were founded by the Seleucid kings but then later re-established and reinforced by the Roman Empire in the southeastern Levant. Together, they constituted enclaves of Greek/Roman culture in a region dominated by Semitic people and culture. The excavations at Hippos are showing increasing signs that it was an unusually heavily fortified and protected location.

The footwear imprints are only one among a number of recent news-making finds Eisenberg and his team have uncovered at Hippos. The other recent discoveries have included a new necropolis; excavation of a mausoleum; the settlement’s first burial tombs with portraiture; a remarkably well-preserved, 30 cm long, 29 cm wide bronze mask of the Greek god Pan (or Roman Faunus); two skeletons found in a basilica with evidence that the individuals had died as a result of the collapse of the basilica roof during an earthquake (one of them, a woman, still wearing her golden dove-shaped pendant); and a unique stucco relief of a Heracles bust and part of a Roman statue among the remains of a bathhouse.

Excavations will continue at the site during the summer of 2015. More detailed information about the excavations and what the team has discovered there are published in a feature article of Popular Archaeology Magazine and at the project website.