Hillah (Iraq): The 'real site' of the Hanging Gardens of Babylon 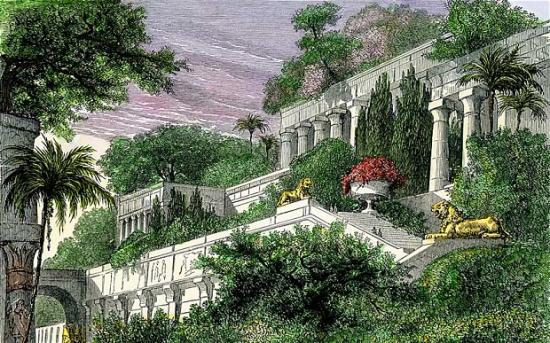 Ancient texts tmay have revealled what could be the site of the Hanging Gardens of Babylon  Photo: ALAMY

It is the only one of the Seven Wonders of the Ancient World for which the location has for centuries remained elusive.

Now, though, an academic from Oxford University believes she has solved one of the world’s last great archaeological mysteries by identifying the precise spot on which the Hanging Gardens of Babylon once stood.

Dr Stephanie Dalley focused her search hundreds of miles north of the site of the ancient city of Babylon, now near Hillah, in central Iraq, to support her theory that the lush, elevated marvel was in fact built near the city of Ninevah, in the north of the country.

The believed site of the Hanging Garden of Babylon, in the foregound, on a mound near the ancient city of Ninevah, northern Iraq (CHANNEL FOUR)

From piecing together clues from ancient texts, the academic has uncovered evidence that the gardens were in fact produced not by the Babylonians and their king Nebuchadnezzar, as has traditionally been assumed, but rather by their neighbours and foes, the Assyrians under their monarch, Sennacherib, around 2,700 years ago.

Sennacherib’s capital, Ninevah, is now near to Mosul, an area of Iraq still wracked by religious and ethnic violence, and although Dr Dalley travelled to the region earlier in the autumn, her team considered it too dangerous to visit the exact spot.

However, using maps, she was able to direct a local film crew, with an armed escort, to the area, next to the ruins of the king’s palace, to survey it on her behalf.

Their footage showed a heavily a vast mound of dirt and rubble, which slopes down to an area of greenery and looks out onto modern housing and open countryside beyond.

Dr Dalley said: “That’s the best place for it to be. It looks like a good place for a garden.

“More research is now required at the site, but sadly I don’t think that will be gpossible in my lifetime.

“My conviction that the gardens were in Ninevah remains unshaken.”

The footage is the culmination of more than 20 years of research by Dr Dalley, from Oxford University’s Oriental Institute, to prove the correct location of the gardens.

With no archaeological evidence ever found for them, many have dismissed the gardens as a myth.

Knowledge of them is based on a few accounts, written hundreds of years after it was said to have been built by people who never saw it.

One of these accounts claims that it was created by King Nebuchadnezzar, 600 years before the birth of Christ, at Babylon as a paradise in the desert for his wife who missed the green mountains of her home.

However, in the writings of the time - including Nebuchadnezzar’s own texts - there is not one single mention of any garden and more than a century of digging has turned up nothing.

Dr Dalley directed her own research further north after decoding an ancient “cuneiform” text - a script from the Babylonian and Assyrian Empires - that led her to believe the gardens had been attributed to the wrong location, the wrong man and wrong period.

The researcher - one of a handful of people in the world who can read cuneiform - came across a prism at the British Museum with cuneiform text which describes the life of Sennacherib; who lived 100 years before Nebuchadnezzar and reigned over an empire stretching from southern Turkey to modern day Israel, which describes a palace that he built and a garden that he built alongside calling them a “Wonder for all people”.

Further support for the theory comes from a bas-relief, removed from Nineveh and brought to the British Museum, showing his palace complex and a garden featuring trees hanging in the air on terraces and plants suspended on arches.

Because Ninevah is so far from Babylon, this evidence has previously been overlooked. However, Dr Dalley has found that the Assyrians conquered Babylon and their capital became known as “New Babylon”, possibly accounting for the confusion over the names.

Her research, which features in a Channel 4 documentary tonight, Finding Babylon’s Hanging Garden, has led her to establish that the gardens were built in a series of terraces, buit up like an amphitheatre, with a lake at the bottom.

Water was bought to the city and surrounding areas via a 60 mile long canal.

Evidence of this structure, 300ft wide and 60ft deep at some points, remains on the landscape and can be seen on now de-classified photographs taken by US spy satellites and analysed by Dr Dalley.

The greenery would have required around 300 tonnes of water a day.

An inscription found by the academic describes how this was achieved, with water from the lake was raised up onto the terraces by device using the same principles as the Archimedes’ screw - some four centuries before it was thought to have been invented.

Ninevah features in the Old Testament as the city to which Jonah was sent by God to preach against its sinfulness.

The list of wonders was originally drawn up, however, as a guide to “must—see” sights for ancient Greek travellers in the eastern Mediterranean around the third century BC.

Most were destroyed by earthquakes and only the Pyramid of Giza survives.