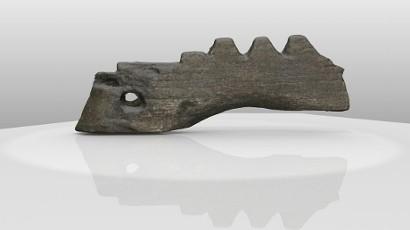 The history of music in Britain may be 1000 years older than originally thought.

Archaeologists have found what could be the remains of Europe's oldest stringed instrument.

A small wooden fragment thought to be from a 2300-year-old lyre was found at an excavation site in High Pasture Cave on the isle of Skye.

Music archaeologists Dr Graeme Lawson and Dr John Purser studied the piece and said the notches where strings would have been placed are easy to distinguish on the artefact, despite it being been burnt and broken.

Dr Lawson, of Cambridge Music-archaeological Research, said: "For Scotland, and indeed all of us in these islands, this is very much a step-change.

"It pushes the history of complex music back more than a thousand years into our darkest pre-history. And not only the history of music but, more specifically, of song and poetry because that's what such instruments were very often used for.

"The earliest known lyres date from about 5000 years ago in what is now Iraq, and these were already complicated and finely made structures. But here in Europe even Roman traces proved hard to locate. Pictures maybe but no actual remains."

It is the location of the discovery which has truly amazed the archaeologists.

Dr Lawson added: "Here is an object which places the Hebrides, and by association the neighbouring mainlands, in a musical relationship not only with the rest of the Barbarian world but also with famous civilisations.

"It now becomes a world that was held together not just by technology and trade but also by something as ephemeral and wonderful as music and poetry and song."

Until now the oldest stringed instruments found in Europe were lyres dated around 600AD, which were played by Vikings in Scandinavia.

A lyre is an U-shaped harp instrument associated with ancient Greece.

Dr Purser, a cultural historian, said: "What, for me, is so exciting about this find is that it confirms the continuity of a love of music amongst the Western Celts.

"Stringed instruments, being usually made of wood, rarely survive in the archaeological record but they are referred to in the very earliest literature and, in various forms, were to feature on many stone carvings in Scotland and Ireland and to become emblematic in both countries."

High Pasture Cave on Skye has been a focus of Bronze Age and Iron Age research since 1972. Evidence of craft, metalworking and debris from major feasting events have been found on the site, which extends back at least 5000 years.

The artefact was discovered in 2010 and was transferred to consultancy firm AOC Archaeology in Edinburgh for conservation.

Managing director Dr Andy Heald said: "Previous to this, the earliest musical representation we had encountered had been a carved concert lyre and plectrum on the side of an exquisite Roman altar we excavated from Musselburgh in 2010.

"But to have an actual fragment of an even earlier lyre really fires the imagination. It brings another dimension of our Iron Age antecedents to life."