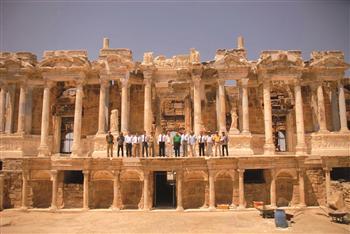 The stage has Baroque architectural characteristics. The ancient theater is found within the borders of the Hierapolis. DHA Photo

The theatre stage in the ancient city of Hierapolis in the western province of Denizli is on UNESCO’s World Heritage List, perceived as one of the beautiful traces left today from Roman times. The excavations in the area are still revealing ancient artifacts.

“This theatre stage is very beautiful. During the renovation we enlightened a very important historical trace. With the excavations that started in 1957, we have discovered lots of artifacts,” he said, adding that they had discovered 3,000 marbles belonging to the theater building so far. “Lately, we have focused on the renovation of this area. We have supporters such as the Ministry of Culture and Tourism, the Governor’s Office, and the university,” he said.

The stage has Baroque architectural characteristics, according to D’Adria. “Our team has finished the excavations. This theatre stage is a very beautiful and significant trace left from Roman times. There is nothing like it in Turkey because this theatre is like an open air museum. There is a certain characteristic of architecture, decoration and reliefs in the building,” he said, adding that there were also reliefs of the Roman Emperor Septimius Severus and his wife Julia on the upper part of the stage.
They are built in this way because at that time Severus loved the city and helped the constructions of this theatre building. This kind of an architectural example is unique,” said D’Adria.

The ancient theater is found within the borders of the Hierapolis ancient city, “Hierapolis” meaning “sacred city” in Greek. The city was built by Eumenes II in 190 B.C. The city came under the control of the Roman Empire and when the constructions were destroyed by earthquakes the new buildings were made in the Roman architectural style. The death of Saint Phillippus, one of the apostles of Christ, lent the city a religious importance. It was delivered to Byzantium in 395 C.E., and then came within the borders of the Seljuk Empire, when it was also the site of gladiator fights.

Hierapolis was first excavated by the German archaeologist Carl Humann in June and July 1887. His excavation notes were published in his 1889 book “Altertümer von Hierapolis.” His excavations were quite general and included a number of drilling holes. He would gain fame for his later discovery of the Pergamon Altar, which was reconstructed in the Pergamon Museum in Berlin.

After the large white limestone formations of the hot springs became famous again in the 20th century, it was turned into a tourist attraction named “Cotton Castle” (Pamukkale). The ancient city was rediscovered by travellers, but also partially destroyed by new hotels that were built there. These buildings have been removed in recent years; however the hot water pool of one hotel was retained and (for a fee) it is now possible to swim amongst the ancient stone remains.