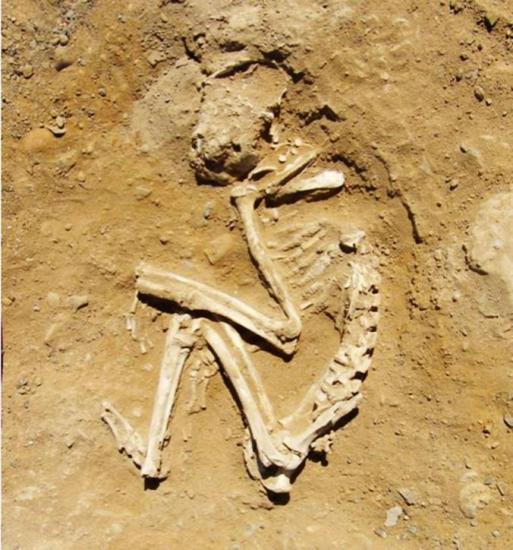 Exotic animals such as baboons were buried near their high-status owners in the ancient Egyptian cemetery of Hierakonpolis. PHOTOGRAPH BY RENEE FRIEDMAN, COURTESY OF HIERAKONPOLIS EXPEDITION

For ancient Egyptians, owning a menagerie of exotic animals conveyed power and wealth. But the remains of baboons, hippos, and other elite pets buried more than 5,000 years ago in a graveyard near the Nile reveal the dark side of being a status symbol.

Baboon skeletons found at one tomb bear dozens of broken hand and foot bones, hinting at punishing beatings. At least two baboons have classic parry fractures, broken arms that typically occur when trying to shield the head from a blow. A hippo calf broke its leg trying to free itself from a tether, and an antelope and a wild cow also show injuries probably related to being tied.

Ancient zookeepers “clearly had difficulty maintaining these animals,” says zooarchaeologist Wim Van Neer of the Royal Belgian Institute of Natural Sciences, who led a new analysis of the skeletons to be published in an upcoming issue of the International Journal of Osteoarchaeology. “The practical means of keeping animals in captivity were not so sophisticated as nowadays.”

The animals were found in the ancient cemetery of Hierakonpolis, a town that thrived long before Egypt became a united kingdom ruled by pharaohs. Excavations have revealed two elephants, a leopard, two crocodiles, and remains of nine more exotic species buried near the tombs of powerful citizens. Nowhere else in Egypt have archaeologists found such an array of ancient zoo animals, which were probably sacrificed after their owners died. 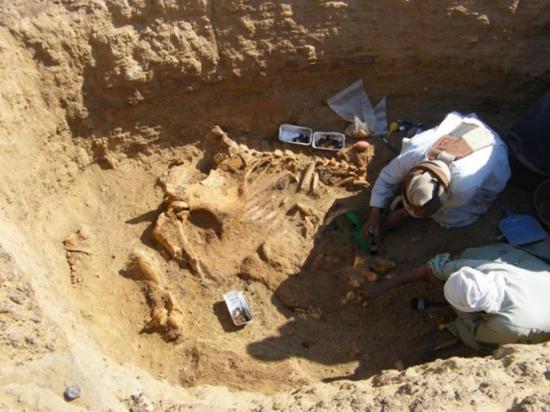 Workers excavate the skeleton of a male elephant. Large, powerful animals inspired awe. So did the rulers who owned them. PHOTOGRAPH BY RENEE FRIEDMAN, COURTESY OF HIERAKONPOLIS EXPEDITION

Different animals held different meanings for their owners, says Renee Friedman, who is director of the Hierakonpolis Expedition and has received past research support from National Geographic. Elite rulers would have wanted to emulate the strength of an elephant. The hippo, on the other hand, was a terrifying, destructive beast. To keep a hippo “means you’re controlling a really chaotic force in nature,” she says.

The animals’ injuries show signs of healing, suggesting they were kept alive in captivity for several weeks or longer, rather than being killed immediately. Exactly when the animals were injured is not clear, says archaeologist Richard Redding of the University of Michigan’s Kelsey Museum, who has studied animal bones excavated in ancient Egypt. Redding argues that the animals’ struggles while being caught and subdued could have led to the injuries. 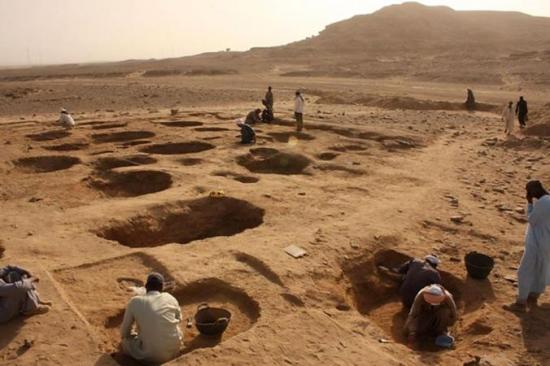 The ancient zoo animals unearthed at the Hierakonpolis cemetery were probably sacrificed after their owners died, perhaps to accompany them to the afterlife. PHOTOGRAPH BY RENEE FRIEDMAN, COURTESY OF HIERAKONPOLIS EXPEDITION

Van Neer agrees that some of the animals may have been hurt while their pursuers tried to nab them. But the 40-plus broken hand and foot bones of the baboons buried in what’s known as Tomb 12 are “really too much to be due to capture,” Van Neer says. A struggling animal trying to elude a posse of humans would have been more likely to break the long bones of the arms and legs.

He also points out that mummified baboons from a later date show few signs of harsh treatment. Perhaps by then the ancient Egyptians had learned to keep animals without beating and tethering them. Even at Hierakonpolis, baboons buried in tombs that seem to be more recent than Tomb 12 show fewer signs of violence.

“You have to be careful with baboons—they bite, they steal, they’re dangerous,” Van Neer says. The earliest keepers may have kept the animals in line with beatings, but over the years, perhaps Egyptians “became better as baboon keepers.”