This map of the world drawn by Henricus Martellus in about 1491 was donated to Yale in 1962. Its faded condition has stymied researchers for decades.
Henricus Martellus, a German cartographer working in Florence in the late 15th century, produced a highly detailed map of the known world. According to experts, there is strong evidence that Christopher Columbus studied this map and that it influenced his thinking before his fateful voyage. Martellus' map arrived at Yale in 1962, the gift of an anonymous donor. Scholars at the time hailed the map's importance and argued that it could provide a missing link to the cartographic record at the dawn of the Age of Discovery. However, five centuries of fading and scuffing had rendered much of the map's text and other details illegible or invisible, limiting its research value.

A team of researchers and imaging specialists is recovering the lost information through a multispectral-imaging project. Their work is yielding discoveries about how the world was viewed over 500 years ago. Last August the five-member team visited the Beinecke Rare Book & Manuscript Library, where for years the Martellus map hung from a wall outside the reading room. (It was recently moved to the Yale University Art Gallery for storage while the library is under renovation.) The team, funded by a grant from the National Endowment for the Humanities, photographed the map in 12 reflective colors, including several frequencies beyond the range of visible light. Those images were processed and analyzed with high-tech software. "We've recovered more information than we dared to hope for," says Chet Van Duzer, a map historian who is leading the project.

The map, which dates to about 1491 and depicts the Earth's surface from the Atlantic in the west to Japan in the east, is dotted with descriptions in Latin of various regions and peoples. A text box visible over northern Asia describes the people of "Balor" who live without wine or wheat and subsist on deer meat. Van Duzer says the new images reveal many such descriptions. For instance, text uncovered in southern Asia describe the "Panotii" people as having ears so large that they could use them as sleeping bags.

Newly revealed text in eastern Asian is borrowed from "The Travels of Marco Polo." From the discrepancies in wording, Van Duzer has determined that Martellus used a manuscript version of the travelogue, not the sole printed edition in Latin that existed at the time. Perhaps the most interesting revelations, say the researchers, concern southern Africa. By studying visible river systems and legible place names, Van Duzer had previously determined that Martellus based his depiction of the region on the Egyptus Novelo map, which survives in three manuscripts of Ptolemy's "Geography." The Egyptus Novelo used geographical data from native Africans, not European explorations. It is thought that the map was based on information shared by three Ethiopian delegates to the Council of Florence in 1441. 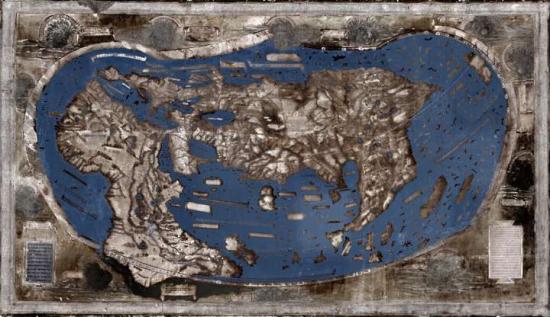 The multispectral image of the map reveals text and details invisible to the naked eye.
The new images show that the Martellus map's depiction of southern Africa extends further east than the known versions of the Egyptus Novelo do, suggesting that the German cartographer was working from a more complete version of the map that showed the eastern reaches of the continent. "It's a seminal and tremendously important document of African mapping by the people of Africa, in this case preserved by a western source," says Van Duzer.

The new images also have helped Van Duzer to determine how the Martellus map influenced later cartographers. The map is similar to a world map drawn by German cartographer Martin Waldseemüller in 1507, which was the first map to apply the name "America" to the New World. The multispectral images show many of the same texts on Martellus' map in the same locations as on the 1507 map, confirming that the Martellus map was an essential source for Waldseemüller, says Van Duzer. At the same time, he notes, the cartographers' works are not identical: Waldseemüller borrowed most of his place names in coastal Africa from a different map. "It puts you in the mapmaker's workshop," says Van Duzer. "It's easy to imagine Waldseemüller at his desk consulting various sources." Waldseemüller was not alone in contemplating Martellus' work. Van Duzer says it is nearly certain that Columbus examined the Martellus map, or a map very similar to it. Writings by Columbus's son Ferdinand indicate that the explorer had expected to find Japan where Martellus depicted it, and with the same orientation, far off the Asian coast, and with its main axis running north and south. No other surviving maps from the period show Japan with that configuration, says Van Duzer. In addition, the journal of one of Columbus's crewmembers, who believed the expedition was sailing along island chains in southern Asia, describes the region much as it is depicted in the Martellus map. 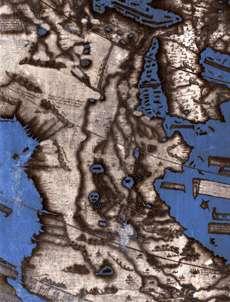 The multispectral images show previously lost details in Martellus' depiction Africa that suggest the German cartographer used data from African sources, not European explorations.
Revealing the map's faded details provides a more complete picture of Columbus's perception of geography, notes the historian. "It's always interesting to learn how people conceived the world at that period in history," says Van Duzer. "The late 15th century was a time when people's image of the world was changing so rapidly. Even within Martellus's own career, what he was showing of the world expanded dramatically." The discoveries are the result of painstaking effort. The multispectral images are processed using special software that finds the precise combination of spectral bands to enhance the visibility of text. The work involves a lot of experimentation. The map's text was written in a variety of pigments, which complicates the task of recovering lost letters because individual pigments respond differently to light.

A text box in the Indian Ocean warns of the orca, "a sea monster that is like the sun when it shines, whose form can hardly be described, except that its skin is soft and its body huge."
"We're still finding things," says Professor Roger Easton of the Chester F. Carlson Center for Imaging Science at Rochester Institute of Technology. "We're focusing on these difficult cartouches and text blocks. One day last week we pulled out 11 characters. The next day, we got several words." Easton estimates the team has uncovered about 80% of recoverable text. Some of the text is entirely invisible before processing. The team is currently at work uncovering details in the region around Java. Once the project is completed, the new images will be made available to scholars and the public on the Beinecke Library's website. 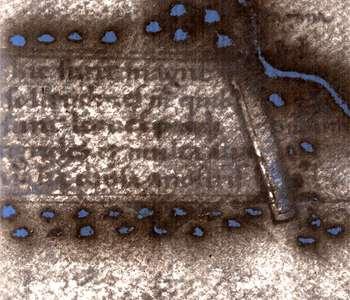 This text found in northern Africa says "Here there are large wildernesses in which there are lions, large leopards, and many other animals different from ours." 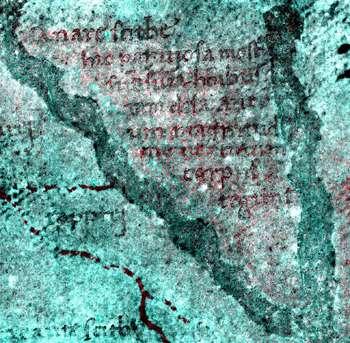 Text in the southern Asia portion of the map describes the "Panotii" people, who purportedly had ears that were so large they could use them as sleeping bags.