While plowing a field, a farmer in southern Germany found one of these golden brooches. It came from a young girl's grave dating to the Iron Age. Credit: Copyright Landesamt für Denkmalpflege Baden-Württemberg/Antiquity Publications Ltd.

An Iron Age tomb brimming with treasures fashioned out of gold, bronze and amber was recently uncovered after lying undisturbed by the Danube River for nearly 2,600 years, archaeologists report.

The glitzy hoard adorned and surrounded the skeleton of a woman who likely died between the age of 30 and 40, and it suggests that she was an elite member of the Celtic society that buried her in ancient southern Germany at a hill fort called Heuneburg in 583 B.C., the researchers said.

Moreover, the presence of a petrified sea urchin and ammonite (a type of extinct mollusk) in the grave are intriguing, and suggest that the woman "was a kind of priestess," said the study's lead researcher Dirk Krausse, the archaeologist for the German state of Baden-Württemberg. [See Photos of Treasures Uncovered in the Elite Woman's Grave]

Multiple graves around the woman's burial chamber had been looted over the years, with some looters digging tunnels from tomb to tomb, facilitating the plundering process, Krausse said. The newfound grave is "extraordinary," as it's the "first richly furnished central grave from that period — the first half of the sixth century in Heuneburg — which was not looted in antiquity," Krausse told Live Science.

People have known about Heuneburg, a prehistoric hill fort near the Danube River, for centuries. The Celtic city-state was likely founded in the sixth century B.C., and it's thought that even the famous Greek Philosopher Herodotus (circa 484 B.C to 425 B.C.) mentioned it while writing about the history of the Danube River, Krausse said.

However, it wasn't until 1950 that researchers began modern excavations of the site, which sits just north of the Alps. But those digs didn't uncover everything.

In 2005, archaeologist Siegfried Kurz, who died in 2014, found a golden brooch brooch in a plowed field. Kurz later led a small-scale excavation of the grave, which was located in an area known as the Bettelbühl necropolis. The grave contained a young child, likely a girl between the age of 2 and 4, who was burried next to a larger grave that had a burial chamber made out of timber, the researchers said.

Concerned that another plow, or other agricultural activity, would harm the larger grave, the researchers excavated the entire 88-ton (80 tonnes) section — which they dubbed Keltenblock — in 2010. A crane carried Keltenblock to the laboratories at the archaeological state office of Baden-Württemberg.

The large grave held myriad treasures: intricate jewelry made of amber, gold and bronze; piles of furs and textiles; an ornament made out of boars' horns and bronze jingle bells that would have adorned a horse's chest; carved boxwood objects; bracelets carved from black stone; and a belt made of bronze and leather. 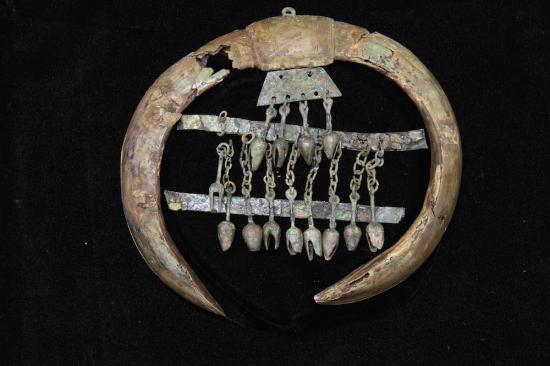 The mounted boars' tusks are adorned with two bronze strips and bronze pendants. If the ornament were placed on a horse's chest, the pendants would have jingled against the bronze strips when the horse moved. Credit: Copyright Landesamt für Denkmalpflege Baden-Württemberg/Antiquity Publications Ltd.

The jewelry and the belt covered the 5-foot-3-inch (1.62 meters) tall skeleton of the elite woman. On the opposite side of the chamber, researchers found the skeleton of what was likely a woman, measuring just 5 feet 1 inch (1.57 m) tall. The woman, whose remains were buried with just a few pieces of bronze jewelry, may have been a servant, Krausse said.

At the feet of the second individual sat a 1.3-foot-long (0.4 m) bronze sheet decorated with circles. A computed tomography (CT) scan of the sheet showed the remains of an iron horse bit, which gave researchers the idea that the sheet may have been a chanfron (also spelled chamfron) — a piece of metal that covers a horse's forehead.

If the bronze sheet is a chanfron, it's the first one on record to be found in Heuneburg and only the second known from this period north of the Alps, the researchers said.

Given that the grave has both the chanfron and the ornament made from boars' tusks that would have covered a horse's chest, it's likely that the elite woman had a strong connection with horses, Krausse said.

The floor of the chamber was lined with oak and silver fir planks. By dating the wood and examining its tree rings, the researchers determined that the trees were felled in the fall of 583 B.C.

This date firmly places the grave with the Hallstatt culture — a name that has been given to the people who lived in central Europe during that time, the researchers said.

It's rare for timber to survive 2,600 years, but the grave's contents persisted because the Danube River routinely flooded, and clay in the soil around the grave helped keep the water inside the burial site. Just like the ocean can preserve a wooden shipwreck, the water from the Danube preserved the timbers and most of the grave's organic contents, with the exception of the textiles and furs (which were in bad shape) and some of the grave's iron and bronze objects, the researchers said.

However, the surviving objects are especially revealing. The elite woman's jewelry is similar to the jewelry that was worn by a young girl whose remains were discovered in 2005, and whose grave was just about 6.5 feet (2 m) away from the elite woman's grave. The similarity in their jewelry suggests that the girl and the woman were buried during the same time period, the researchers said.

"By knowing this new grave, we see the context between the region south of the Alps and this city at the Danube River," Krausse said. "They were much closer, there was much more traffic and interrelations between these areas than we thought before."

The findings were published in the February issue of the journal Antiquity.