Mausoleum unearthed near Jerusalem in 2007 not grand enough for megalomaniacal biblical king, claim some experts 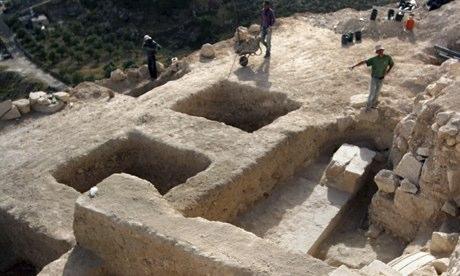 The base of what Israeli archaeologists say is King Herod's tomb, on the hills of Herodium, south-east of Jerusalem. Photograph: AP

A reconstruction of the mausoleum belonging to Herod the Great, the king of Judea, formed the centrepiece of a major 2013 exhibition at theIsrael Museum in Jerusalem, Herod the Great: the King's Final Journey. It was based on a discovery unearthed by Ehoud Netzer in May 2007 in the hills of Herodium, the tumulus south-east of Jerusalem.

Patrich has "profound respect" for his teacher. "I tell my students about how much we owe Netzer for our knowledge of Herodian architecture. He was a great archaeologist and made a considerable contribution. But I believe he was wrong about Herod's tomb. It contradicts everything we've learned about Herodian architecture from Netzer."

Together with his colleague Benjamin Arubas, Patrich voiced his concerns at a conference in Jerusalem. Since then he claims to have sensed "a feeling of relief" in the archaeology community – in other words, he was not alone in having doubts but few people had dared to express them.

The main point of his argument is that the very size of Netzer's mausoleum does not match what we know about the megalomaniac king. Both the mausoleum and the sarcophagus are far too modest in relation to those of the other historical figures, such as Caesar and Alexandra the Great, with whom Herod compared himself.

Patrich believes that it is inconceivable that after building monumental fortresses and palaces, Herod "would have been content with such a dark tomb for himself". He stressed other inconsistencies, such as the absence of a courtyard or an entrance wide enough to receive the thousands who, according to Flavius Josephus, followed Herod's funeral procession. Furthermore, the mausoleum's location is wrong, since it would not have been connected to the main palace buildings as they stood at Herodium's peak.

The layout is awkward too, and would have entailed destroying a water cistern to build the staircase leading to the tomb. "Herod was a master of architecture, so would he really have built the monument in such a clumsy way?" wonders Patrich. He believes that Netzer's tomb belonged to "a different construction project prior to Herod's projects for Herodium".

Jean-Sylvain Caillou, of the French Biblical and Archaeological School in Jerusalem, shares Patrich's doubts. He thinks that Netzer's find could be "a royal tomb, perhaps belonging to one of Herod's family members, but not the king himself. It would be absurd for him to choose a small tomb at the base of the tumulus when all the symbolism surrounding him would have him at the peak of Herodium." Patrich agrees, so it seems that the mystery of Herod's tomb remains.

The dig continues at Herodium, and perhaps there will be new, more verifiable discoveries in the future. Meanwhile, Patrich is pleased to observe that most experts now refer to "Herod's tomb" in inverted commas.