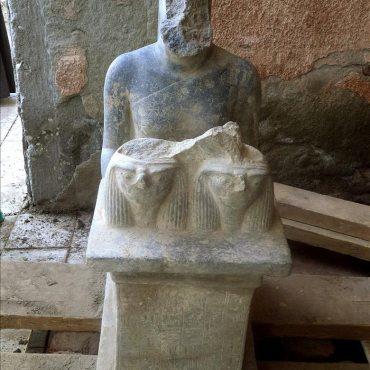 A photograph provided by Egypt's Ministry of State for Antiquities, or MSA, of a statue depicting a high priest kneeling down and dressed in religious vestments. French specialists discovered that statue and another one of a temple scribe, both dating back to Egypt's New Kingdom (1539-1075 B.C.), in the archaeological zone of Luxor, the MSA said. EFE

The excavation work that led to the discoveries was carried out by experts from the French Institute for Oriental Archaeology in Cairo in the patio of a temple dedicated to the falcon-god of war, Montu, located in the town of Armant.

One of the two statues depicts a high priest, while the name and profession of one of the temple scribes are engraved in the other statue, the MSA's chief, Mohammed Ibrahim, said Tuesday.

The first statue, carved out of diorite stone, is 69 centimeters (27 inches) tall and 48 centimeters wide and depicts a priest kneeling down and dressed in religious vestments.

The head of the MSA's Ancient Egyptian Department, Mohammed Abdel Maqsud, said the priest was clinging to an offering table that has two falcon heads, which represent Montu, and religious texts carved in hieroglyphs.

The second piece, made out of limestone, is larger and depicts one of the great temple scribes, "imn-hob," holding a sarcophagus and a statuette of Montu.

Construction of the temple began in the Middle Kingdom (1975-1640 B.C.) and was expanded during the successive Pharaonic dynasties until era of the Ptolemaic Kingdom (332-30 B.C.).

The experts from the French Institute for Oriental Archaeology in Cairo are working in the area in collaboration with France's University of Montpellier and a French-Egyptian center for the study of the Luxor temples.