Bones of a medieval Norman knight and a print of a 14th century French tournament. (Photo : Headland Archaeology)
Being a medieval knight during the time of the Norman conquest of England was as dangerous in peacetime as it was during war.

This at least was the story told by the bones of a man uncovered and analyzed by archaeologists at the city of Herefordshire in the United Kingdom. Evidence points to this skeleton as that of a French knight that fought in many non-lethal combats in England during his lifetime.

The injuries to this man's bones led archaeologists to surmise he fought at tourneys, a form of non-lethal combat where knights flailed at each other with blunt weapons. A tournament or tourney is the name popularly given to chivalrous competitions or mock fights during the Middle Ages and Renaissance from the 12th to 16th centuries.

Archaeologists described this knight as standing 1.7 meters (5 feet 8 inches) tall. They surmise this man was some 45 years or older when he died based on a bone analysis. His injuries were severe.

He had a serious trauma on his right shoulder blade, 10 of his right ribs and left leg. Four of the man's ribs showed healed fractures that may have occurred simultaneously, suggesting a single instance of trauma, wrote researchers in their pathology report, according to LiveScience. 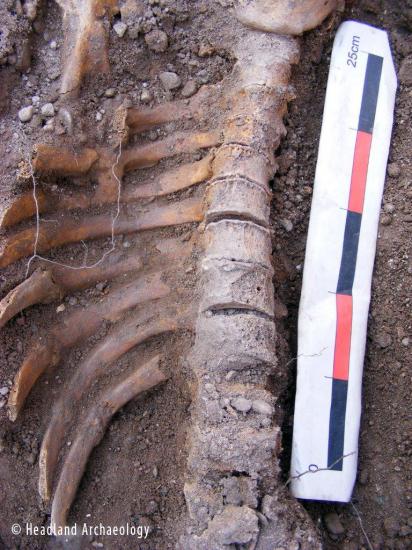 Ten of the man's right ribs showed signs of fractures, including several that were not yet healed.
Credit: Headland Archaeology

Another four ribs were in the process of healing. This showed the man was still recovering from the injuries when he died. The knight's other two damaged ribs also show evidence of trauma.

His left lower leg exhibited an unusual twisting break that might have been caused by a direct blow or a rolled ankle. The man had lost three of his teeth during his lifetime.

Chemical analysis of his other teeth showed the man probably grew up in Normandy and moved to Hereford later in life.

This knight was buried in a stone lined grave, a type of grave used between the 12th and 14th centuries, researchers said.

"He's the most battered corpse on the site. He had the largest number of broken bones," said Andy Boucher, a regional manager at Headland Archaeology, a commercial archaeology company that works with construction companies in the UK.

"Tourney, the true form of jousting, is open combat between large groups of people in fields -- basically, a mock battle," Boucher said.

"They just laid into each other with blunted weapons, which is another reason we think he might be a knight, because none of the wounds to him are caused by sharp weapons. They're all caused by blunt force trauma."

Archaeologists uncovered the knight's skeleton along with about 2,500 others buried at Hereford Cathedral. The cathedral, originally a Catholic church, was built in the 12th century and served as a burial ground in the following centuries.