Dormice, sea urchins and fresh figs were among the delicacies enjoyed by ordinary Romans, British archaeologists have revealed after discovering a giant septic tank at one of the ancient cities destroyed by the eruption of Mt Vesuvius. 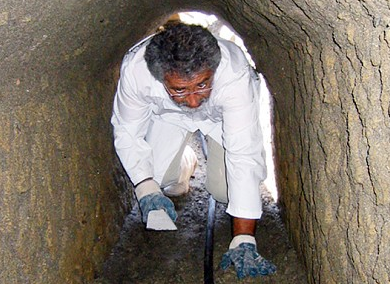 An archaeologist crawls through a sewer beneath the remains of a Roman apartment block in Herculaneum Photo: JANE THOMPSON/HCP

Archaeologists found a treasure trove of everyday artefacts after digging up nearly 800 sacks of compacted human waste from the tank, which lies beneath the remains of a Roman apartment block in Herculaneum, destroyed after it was buried by ash from the volcano in AD79. 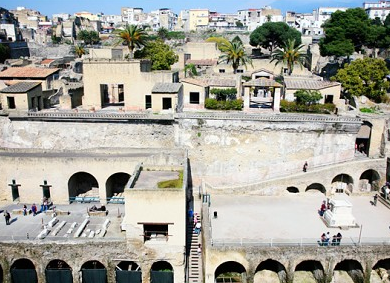 The Roman apartment block was destroyed after it was buried by ash from the volcano in AD79 Photo: ALAMY

The British team has found hundreds of objects, including bronze coins, precious stones, bone hair pins and an exquisite gold ring decorated with a tiny figure of the god Mercury.

Close scrutiny of the composted human waste has revealed that the estimated 150 middle- and lower-class inhabitants of the three-storey block of flats had a much more varied diet than previously thought.

They regularly feasted on fish, spiky sea urchins, figs, walnuts, eggs and olives, using the olive pips as fuel in their homes.

Each apartment’s kitchen and latrines was linked to the septic tank via waste disposal chutes, down which households would chuck broken plates, cups and other everyday items.

The septic tank is actually in the form of a 10ft-high tunnel which extends for nearly 100 yards beneath the apartment block.

It was discovered entirely by accident when archaeologists started looking for a way of preventing the ancient site from being flooded during heavy rain. 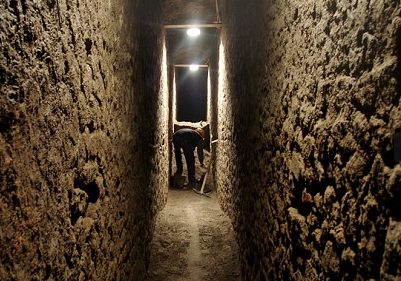 The septic tank was discovered entirely by accident when archaeologists started looking for a way of preventing the ancient site from being flooded during heavy rain Photo: DOMENICO CAMARDO/HCP

The team, from the British School at Rome, an archaeological institute, has been digging at the site on the Bay of Naples for a decade.

Their work has been financed by 15 million euros from David Packard, a billionaire American philanthropist and the eldest son of the co-founder of the Hewlett-Packard computer company.

“What we’ve found is a fantastically good snap shot of what the Romans were using in their kitchens, from pots and pans to glass ware and broken cups,” said Andrew Wallace-Hadrill, the director of the Herculaneum Conservation Project.

“What is striking about the organic material is the sheer range of food they were eating. “We’ve found an incredible number of fig pips because they go straight through the gut. And it’s absolutely certain they ate dormice — they had pots of an ingenious construction in which they fattened them up,” said Prof Wallace-Hadrill, who is also the master of Sidney Sussex College at Cambridge University.

The recent discoveries will form part of a major exhibition on Herculaneum and Pompeii at the British Museum in 2013.