A grass fire in northern Montana has uncovered an ancient complex of stone alignments and other features that have likely not been seen for centuries — and certainly never from the air.

The features emerging from the blackened plains appear to have served both ceremonial and practical uses, forming a site that land managers described as “exceedingly rare and unique.”

Among the formations are two large effigies —or figures made from arrangements of stones — one of a human and the other, perhaps, of a turtle.

Some of these formations had been identified in the 1960s, as part of a prehistoric bison-hunting camp known as the Henry Smith site, but they were never extensively recorded, and their full extent remained obscured by the prairie.

Partial excavations at the time revealed a portion of the impoundment where the animals were trapped, as well as butchering tools and stemmed stone points that were indicative of a cultural complex from the Northern Plains known as the Avonlea phase.

The artifacts — along with radiocarbon dates from six discrete layers of cast-off bison remains — showed that the site was used regularly from 770 to 1040 CE.

As part of a new test project this spring, land managers set out both to preserve and to record the Henry Smith site, using a combination of the very latest technology, and the most ancient.

First, in mid-April, a prescribed fire was set and was allowed to consume some 320 acres of open prairie.

To determine how the burn might interact with archaeological resources, researchers placed temperature sensors in stacks of bones and rocks throughout the site.

Then, two weeks later, officials surveyed the blackened area using an aerial drone, flying at a height of 90 meters to create the first three-dimensional map of the site, and likely revealing the full extent of its features for the first time in centuries.

A detail of the images taken by an aerial drone reveals a series of stone circles. (Photo courtesy BLM)

Some of the site’s features, like the drive lines and the corral, served clearly practical functions, researchers said. But others seemed to play a more symbolic role.

A few of the circles exposed at Henry Smith appear to be tipi rings, for example, but others may be types of medicine wheels — larger stone structures that marked an expressly ceremonial, ritual space. 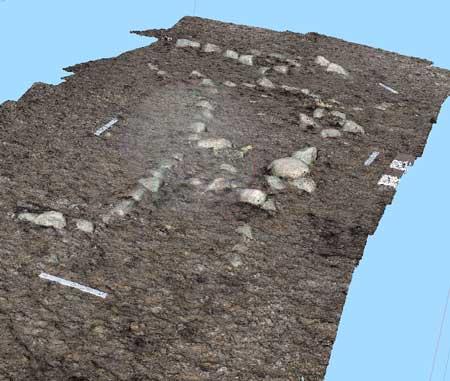 Perhaps the most striking feature exposed by the fire, and captured by the drone, was the human effigy fashioned from an arrangement of rocks. (Photo courtesy BLM)

Effigies, likewise, have been found in both human and animal forms through the range of the Avonlea phase, but their exact function remains unclear.

Historic accounts from some modern Plains peoples suggest that the human geoglyphs were used to memorialize bygone leaders.

Others, including that at Henry Smith, may have been used to commemorate sites of particularly successful hunts or harvests.

With the Smith site now exposed to full view, researchers said, its features can be mapped, measured, and analyzed for the first time to help untangle both the spiritual and survival practices of the Great Plains’ ancient hunters.

“This was the first use of a [drone] by the BLM to obtain imagery and data in relation to Cultural Resources in the Northern Plains,” Chase said.

“The project will allow BLM to better study, document and manage this unique location.”