In Hemmaberg, Austria, archaeologists excavating a cemetery associated with an early Medieval church discovered the remains of a middle-aged man whose left foot had been amputated. In its place, a unique foot prosthesis was found. Through analysis of the burial and the bones, the researchers tried to figure out who this man was and whether his foot was amputated for medical reasons, accidentally, or as punishment for a crime.

Heavily occupied in the Late Roman to Early Medieval periods, Hemmaberg was a site of early Christian pilgrimage due to its abundance of churches. Archaeological excavation of graves near the Church of St. Hemma and Dorothea revealed early Christian burial practices as well: east-west aligned pits with few grave goods and little evidence of clothing. But one grave in particular piqued researchers’ interest. Situated close to the church, buried with a short sword and an ornate brooch, was a man who likely died during the Frankish reign in the area, the mid- to late-6th century AD, but who had clearly survived a foot amputation.

The analysis of the skeleton, which will be published in the March issue of theInternational Journal of Paleopathology, was led by bioarchaeologist Michaela Binder of the Austrian Archaeological Institute (OEAI). She and her team pored over the bony evidence, and also x-rayed and CT scanned the remains, in order to learn as much as possible about this man’s life and injury. His name is lost to history, but his bones provide a wealth of information. 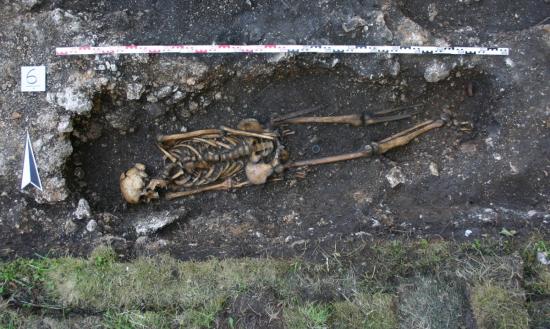 Grave 6 at Hemmaberg, with the burial of the wearer of the prosthesis. (Image courtesy OEAI, the Austrian Archaeological Institute.)

Osteological investigation revealed the man had major dental health issues, with cavities throughout his mouth, and he sustained a broken nose that healed before his death. Evidence of arthritis was found throughout this body, but particularly in his shoulders, hips, left knee and wrist, and spine. He also had rotator cuff disease in his left shoulder. The left foot and the ends of the left tibia and fibula were missing entirely, providing clear evidence of amputation, and small circular holes are likely an indication of infection of the remaining lower leg bones.

To try to determine how long the man survived following the amputation, Binder and her colleagues turned to the X-rays, as cut marks on bone can disappear as soon as two weeks after an amputation procedure.  The X-rays showed significant changes in the bone density of the femur, tibia, and fibula on the left side of the body as compared to the non-amputated right side. But osteoarthritis in the left knee suggests the man was indeed still using his left leg following the amputation, with the assistance of a prosthesis. 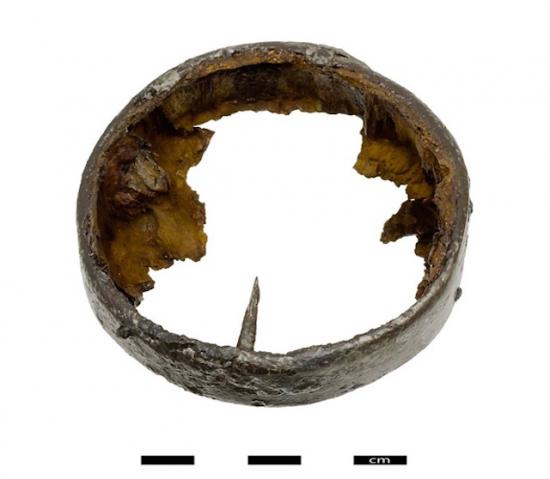 The iron component of the prosthesis from Hemmaberg. (Image by K. Allesch, courtesy OEAI, the Austrian Archaeological Institute.)

Prostheses are almost never found archaeologically, perhaps because many in antiquity were made of wood and have rotted away. But this individual was found with an iron band near where his foot would have been. “Remnants of wood together with the position of the iron ring in the grave suggest that the prosthesis may have consisted of a wooden peg reinforced with an iron band on the bottom,” Binder and colleagues write in their article. “The dark staining covering the remaining left tibia and fibula of the individual may have derived from a leather pouch or wooden construction used to strap the prosthesis to the remaining leg,” they conclude.

But what exactly caused this injury? “Three main causes are generally considered in cases of archaeological amputation,” Binder and colleagues note: “medical treatment, mutilation, and trauma (accidental or violent).” Medical amputation is possible in this case, as knowledge of how to do this procedure goes back much further in history, but those were usually done at the joint and not mid-bone as in the Hemmaberg man.  Mutilation as punishment can probably be ruled out as well, as that was generally reserved for vassals and not high-status individuals such as this man. It is more likely this injury was the result of either accidental or violent trauma. 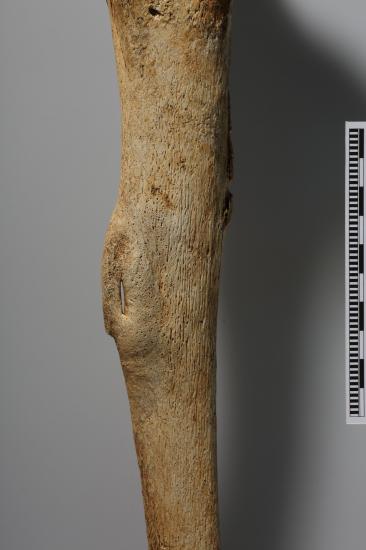 Large focus of new-bone formation on the anterior margin of the right tibia (image by Niki Gail, courtesy OEAI, the Austrian Archaeological Institute).

Clues lie in the additional injury to the man’s right leg, which suggests that blunt force trauma caused a massive hematoma that eventually healed, and in the osteoarthritis and evidence of overused muscles in his hips and spine, which suggest he may have ridden horseback. “Several bioarchaeological studies of war-related trauma in Medieval cemeteries and mass graves,” Binder and colleagues note, “have found the tibia to be a common site of sharp force trauma and have been interpreted as being inflicted by men on foot to mounted men.”

Was the man from Hemmaberg a high-status cavalryman, injured in a skirmish in the 6th century? We will likely never know for sure, but his bones and his grave are certainly suggestive of that interpretation.  More importantly, though, Binder and colleagues have evidence that “the man kept his elite status and importance within the community.” His disability in life did not make him a social outcast in death.