Scientists believe they may have uncovered evidence of a two-million-year-old playground in China.

Researchers found more than 700 stone artefacts in an area of less than six square metres in the Nihewan Basin, Hebei province.

Experts working at the Heitugou site have suggested the items were toys made by early hominids between 1.77million and 1.95million years ago.

The leader of the project, paleoanthropologist Wei Qi, has described the discovery as ‘amazing’.

The South China Morning Post quotes the Chinese Academy of Sciences expert as saying: ‘The site is a treasure chamber that may hold some useful clues to answer a lot of important questions, from the social structure of the early hominids to whether, when and how they arrived in Asia all the way from Africa.’

Close to 20,000 fragmented pieces but larger items – the majority between 20 and 50mm long - are believed to have been made by women and children.

Wei said one ‘finely made and beautifully shaped’ item was possibly a gift made by a mother for her child adding that ‘you can almost feel the maker’s love and passion’.

Researchers said the lack of evidence of animal remains and large stone tools added weight to the argument that the area was used by children rather than adults. 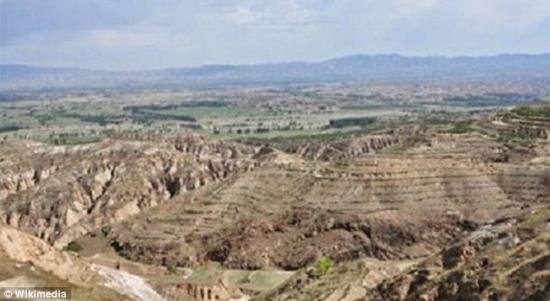 Researchers found more than 700 stone artefacts in an area of less than six square metres in the Nihewan Basin (pictured), Hebei province

The items have been excavated and documented with the findings due to be published in an archaeological journal in China.

Nihewan Basin used to be a huge lake and it is thought the items were buried in a sudden landslide.

However, a debate has surfaced over the findings and researcher Gao Xing of the CAS Institute of Vertebrate Paleontology said it was important to determine whether the artefacts were all hand made.

The South China Morning Post report him as saying: ‘It is difficult to rule out the possibility that they were just stone fragments created by natural forces.

‘To determine whether they were hand-made artefacts may go beyond the limit of science today.’