"Heaven, Hell and Dying Well: Images of Death in the Middle Ages." 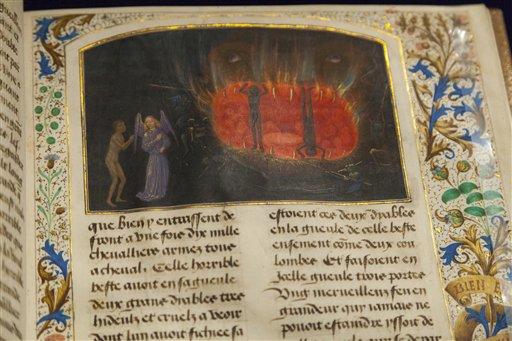 A detail of "The Beast Acheron," a medieval miniature made of tempera colors, gold leaf, gold paint, and ink on parchment. In this miniature "The Beast Acheron," attributed to french artist, Simon Marmion, Valenciennes, 1475, Tondal's wandering soul observes the punishments meted out in Hell to the greedy. The illuminator has envisioned the entrance to Hell as the mouth of the beast Acheron, whose name derives from Greek mythology, referring to the river in Hades or Hell. (AP Photo/Damian Dovarganes)

Death and taxes may both be inevitable in this modern-day world of ours, yet it seems only death has had the ability to inspire great art in people since at least Medieval times.

So much so that life's final curtain call, as seen through the brushes and pens of artists of the 13th, 14th and 15th centuries, is the subject of the J. Paul Getty Museum's latest exhibition, "Heaven, Hell and Dying Well: Images of Death in the Middle Ages."

With paintings, drawings, parchment illustrations and works on stained glass, each of them intricately detailed and most of them stunningly colorful, the exhibition takes visitors on a tour of the final days of existence and straight into the afterlife.

It opened last week in a dimly lit gallery that, while the space was darkened mainly to protect the priceless and fragile parchment works, also manages to evoke through its muted lighting a quiet, contemplative space for reflecting on the end of life's existence. 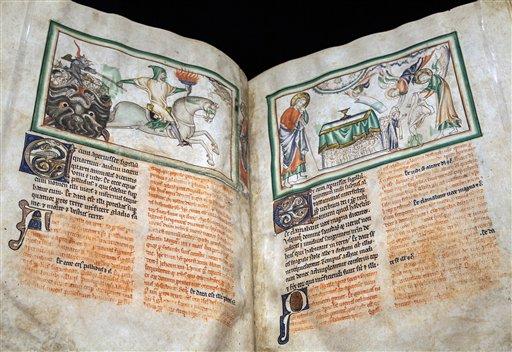 A medieval manuscript : "Opening the Fourth Seal; The Fourth Horseman" by an unknown artist, London, about 1255-60. In chapter six of the Apocalypse, Saint John the Evangelist described his vision of the four horsemen who herald the coming of the Last Judgment. (AP Photo/Damian Dovarganes)

It will remain there through Aug. 12, in the sprawling museum nestled in the hills above Los Angeles.

The exhibition's creation was the brainchild of guest curator Martin Schwarz, who although just 26 is fascinated both by death and how its representation in films, books and other modern media appears so strongly influenced by the European artists of 500 to 700 years ago.

It was during the Middle Ages that those artists, perhaps influenced by the relatively short life spans of a period marked by disease, wars and terrifyingly high child mortality rates, really began to envision what it was like to confront death at almost any moment, says Schwarz.

What's more, their work, often used to illustrate Biblical and other stories that had been handed down through the centuries, began to take on a look that continues to this day in the way devils, vampires, angels and other such creatures are portrayed.

"If you think about the imagination of Heaven and Hell in movies and popular culture and books and so forth, very much these ideas go back to the Middle Ages," Schwarz said recently by phone from Chicago, where he is pursuing a Ph.D. in art history at the University of Chicago. "Everybody who thinks about Hell today knows about demons, and when we see them we identify them very easily because we know what they look like from these artists."

In the 15th century book "The Visions of the Knight Tondal," for example, French artist Simon Marmion painted Hell pretty much as it is represented today: as a big, red, blast-furnace-like place filled with familiar demons and tortured souls.

At left, an Oil on panel titled "The Crucifixion," by Dreux Bude Master, possibly Andre d'Ypres, Before 1450. Set in a crowded and colorful landscape, the central figure of Christ on the cross divides two groups of people- his sorrowful followers on the left, and his evil prosecutors and executioners on the right. Below, Christ thrusts the devil down while retrieving Adam and Even from hell. (AP Photo/Damian Dovarganes)

Among those souls, in both Marmion's and other artists' works, are a fair share of priests and nuns who are being tormented for eternity for failing to maintain their chastity vows during their lifetimes.

"That's among my favorites," said Elizabeth Morrison, the museum's senior curator of manuscripts, as she pointed out a collection of beleaguered priests and nuns. She noted it is a reminder that today's priestly sex scandals are nothing new.

As for Death himself, in an illustration for the prayer book "Denise Poncher Before Death," he also appears much as he does today. He's a big, boney fellow covered in worms and armed with his trademark scythe.

In fact he's carrying four scythes in Marmion's work and, looking rather jaunty, almost appears to be showing them off as he confronts Poncher, a beautiful young woman of means who art historians believe the expensive prayer book was created for.

"It reminds you that death could be lurking around any corner and you'd better be prepared because you want to go to Heaven, not Hell," Morrison said of the message in the text and the illustration. "It's a realization that, yes, I'm young and beautiful, but I could die at any time, and that's why I need for my soul to be prepared."

A prayer book titled, "Denise Poncher before a Vision of Death," Paris, about 1500, depicts the owner Denise Poncher kneeling with her prayer book before Death, a terrifying skeleton covered with rotting flesh and holding numerous sickles. (AP Photo/Damian Dovarganes)

Interestingly, though, even as people prepared for Heaven, most of the artists represented in the exhibition portrayed it as a pretty boring place.

In Flemish painter Master of James IV of Scotland's illustration of the Biblical story of "The Feast of Dives," for example, Heaven simply contains blue skies, a few trees and some winged angels milling about.

Hell, on the other hand, is filled with serpents, demons and other interesting looking monsters that pass the time jabbing Dives with pitchforks after he's been dispatched there for refusing to aid the beggar Lazarus.

Morrison, noting the contrast, says it's likely that, as with the making of horror films today, Hell and all the evil it represents was simply much easier for artists of the Middle Ages to illustrate, especially after they unleashed their imaginations.

"When you hear people talking about Heaven, even nowadays, it's like well, maybe there's a field and birds tweeting and sunlight and it's a good temperature," she said. "But if you think about Hell you can come up with 30 images off the top of your head: There's demons, there's pain, there's fire, there's grills, there's a devil ... "