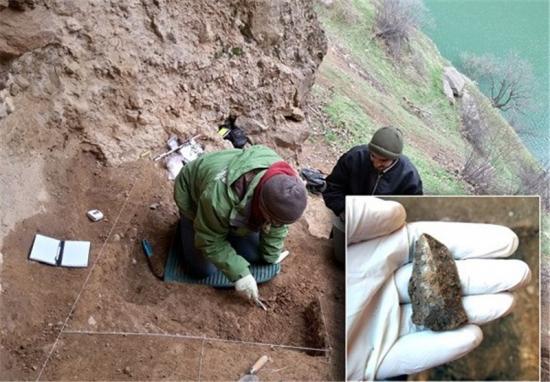 Iranian archeologists found a number of stone tools in the western province of Kurdistan that they believe were employed by Paleolithic hunters.

Archaeological excavations in a number of caves and rock shelters along the Sirwan River, in Iran’s western region of Hawraman, revealed stone tools, burned animal bones and remains of hearths left by Stone Age hunters.

The new discoveries suggest that primitive game hunters lived in the region from about 40,000 years ago, until the end of Ice Age, around 12,000 years ago.

“The new finds provide researchers with valuable information about the way of life, game hunting and tool carving culture of the primitive hunting societies and food collectors,” Fereidoun Biglari, Paleolithic specialist and head of the excavation team explained.

"One of the important finds in this field research was discovery of a Middle Paleolithic rock shelter site near Naw village called ‘Maro Darai.’ This newly found site contains earliest evidence of human presence in the Kurdistan province", he added.

"Primary examination of animal bones indicates that Mousterian hunters were more focused on wild goat herds that lived in the rugged mountains of Hawraman, high above the Sirwan River", Biglari noted.

According to Iran's Cultural Heritage, Handicrafts and Tourism Organization (ICHHTO), two other teams have also found archaeological evidence including two important Iron Age sites near Ruwar village in Hawraman, one of which consists of a large dome-shaped stone grave dating back to about 3,000 years ago.