During the June and November of 2014, the Hangzhou Provincial Institute of Archaeology conducted the salvage excavation at the sea-wall site which was probably constructed during the time of Wu-Yue state’s Emperor Qian Liu of the Five Dynasties period. The excavation covers an area of 450 square meter, recovering the structure of the sea-wall along with a large collection of ceramic pieces, straw sandals, reed-weaved artefacts, lacquer containers, flax ropes and flora and faunal remains. 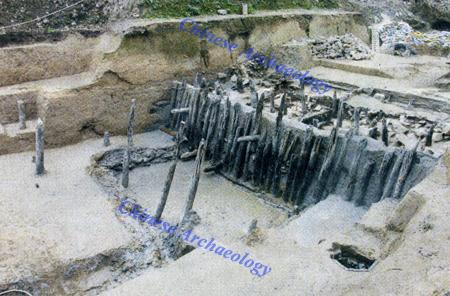 Outside structure of the sea-wall site at Hangzhou 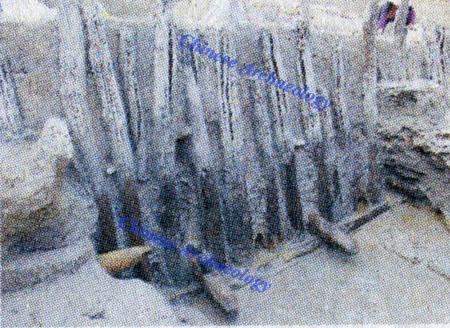 Wooden structure of the eastern surface at Hangzhou

The part which connects to the water presents a complicate design. It can be mainly separated into two sections. The section in the east is built layer by layer. Between the layers, bamboo and reed is sandwiched and reinforced by wooden pegs whose diameter is approximately 4cm. Inside the wall, there are 20cm-width wooden posts which are bounded together by flax ropes and thus aliened into two layers. The west section is composed of a wooden frame filled up with soil and stones. In addition, bamboo fences, bamboo chains and flax ropes are used to strengthen the wall body. Within the frame there alien 8 rows of wooden posts from west to east. Two layers of timbers are placed across the post. The intersection of timbers and posts are fastened by bamboo and flax rope, thus forming a ‘井’ inner structure. Mortise and tenon joints were also adopted in order to strengthen frame. Bamboo fences are used at the edges of the wooden frame to make the wall body stronger. Likewise, fences separates frame inside to help supporting the weight. Small pieces of stones are filled in the bamboo baskets and the baskets are placed on the top of the sea wall serving as protecting stones. The last procedure of construction is to furnish the top surface with mixed paste of straws, reeds and soil, and use wooden pegs to make it firm. The unearthed remains of bamboo baskets at Hangzhou

The excavation contributes to our knowledge about the structure, procedure and techniques of sea wall construction during the Five Dynasties period. It is especially salient to explore how straws and woods were utilized to reinforce the wall body. According to the ancient text, such method was first employed in years of Emperor Zhenzong of Song dynasty. This discovery, however, provides brand-new information of studies on the developments of sea wall constructions during the Five Dynasties period. The stratigraphic profile of the site clearly displays the episodes of sea wall construction, utilisation, maintenance, and abandon. The first construction started at the forth year of Kaiping, Later Liang Period (A.D.910). There were three events of repairing of various scales carried out from the Five Dynasties period to the Song Dynasty. The sea wall was no longer used in the middle phase of the Song Dynasty. It became parts of the city completely after the Southern Song Dynasty. 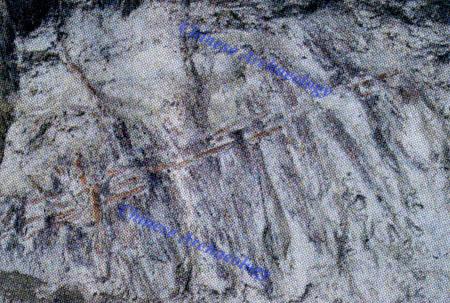 The location of the sea wall also indicates the locations of the Hangzhou city of the Five Dynasties period and the Lin’an city of the Southern Song Dynasty. Recorded in the historical texts, as the traditional rammed-earth sea wall was not strong enough to resist weaves of the Qiantang River, the Wu-Yue Emperor Qian Liu commanded to build the sea wall employing new techniques. The construction of the sea wall secured the Hangzhou city from the damage caused by floods and therefore underpinned the layout the Hangzhou city from then on. This sea wall remnant is so far the earliest discovery tracking back to the Five Dynasties period. On balance, it renders significant information about the architectural development as well as the history of the Hangzhou city in ancient dynasties.   (Translator: Dong Ningning)