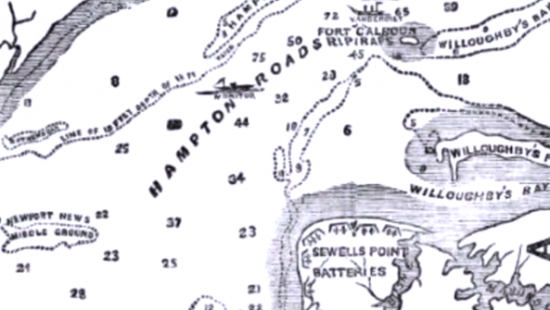 Archaeologists began peeling back the earth a few hundred yards from the center of this old Virginia port town Wednesday, probing for signs of the pioneering freedmen's village where thousands of refugee slaves lived during the Civil War.

Using the giant shovel of a Gradall excavator, they shaved down through almost two feet of soil piled up over more than 150 years, looking intently for any stain or artifact that might provide a link to the densely built settlement of shanties that rose up in the scorched ruins of Hampton after its destruction by a Confederate fire in August 1861.

But even after several promising postholes and a scattering of mid-1800s artifacts emerged from the dirt early Thursday, archaeologist Nicholas M. Luccketti tempered his optimism with the recognition that finding any significant trace of the contraband slaves' short-lived cluster of small dwellings, fenced-in lots and meandering alleyways will require both luck and determination.

"We're finding what looks like the sort of features we anticipated from studying the Civil War photographs of the contraband camp. We have artifacts from the right period showing up on the surface. So we're cautiously optimistic," he said.

"But the structures we see in the pictures were slightly built and ephemeral. They were followed by continuous occupation and many more buildings constructed on top of them from the Civil War period on. So this is going to be an extraordinary challenge."

Sparked by Maj. Gen. Benjamin F. Butler's landmark May 24, 1861, decision to give asylum to three runaway Hampton slaves as "contraband of war," thousands and thousands of blacks converged on Union-held Fort Monroe, arriving in such numbers that their teeming camp soon overflowed into even larger satellite villages — first in what is now called Phoebus and then in the fire-blackened remains of Hampton.

After the departure of the encamped Army of the Potomac in April 1862, especially, as many as 7,000 souls crammed into the sprawling hodgepodge of shanties and cabins that sprouted up mostly north of Queen Street and the far western outskirts of town near what is now called Armistead Avenue.

Described by the late historian Robert Engs as the home of "freedom's first generation," the pioneering settlement quickly became a kind of social, political and racial laboratory in which black residents built their own dwellings, founded their own churches and schools and pressed the Union army to recognize their new status as free men.

But other than the names of the streets, which were dubbed "Lincoln," "Liberty," "Grant" and "Union, precious little physical evidence remains of the village where thousands helped shape the gradual redefinition of the Civil War into a struggle for emancipation.

"Much has been written about the contrabands here, but this is the first time archaeologists have looked for the remnants of the Grand Contraband Camp that once stood on this ground," said Hampton History Museum Curator J. Michael Cobb.

"What they find will open a new window on the past that is unavailable anywhere else, giving us new insights into who these courageous people were and how they lived. This is the place where the contraband experiment began and eventually led to emancipation."

Still, none of the experts conducting the city-funded dig for the James River Institute for Archaeology thinks the job of ferreting out the settlement will be easy after all the changes that have altered the Hampton landscape since the Civil War.

The shanties of the contraband camp were "insubstantial to begin with," said institute historian Matthew R. Laird, and the property itself was disturbed by successive waves of development, including the widening of Armistead Avenue and Lincoln Street as well as the construction of the Harbor Square apartment complex in the 1970s.

Coupled with the proliferation of single-family homes built on the 19-acre site during the late 1800s and early 1900s, those disturbances may have destroyed or — in the case of the giant concrete slabs on which Harbor Square was built — completely covered up any evidence of a settlement that lasted only a few years.

So Laird combined new aerial photographs of the property with some half-dozen old insurance maps and other sources reaching back into the 1870s, then pored over the resulting layers to single out the locations with the best chance for preserving any subterranean remains of the refugee village.

What resulted was a collection of primary targets covering fewer than 24,000 square feet — or just over half an acre.

"So what we're trying to do is find these little undisturbed parcels to focus on while avoiding anything from the late 19th and 20th century that could mask the ephemeral features of the camp."