Did Uruk soldiers kill their own people ? 5500 year-old fratricide at Hamoukar, Syria 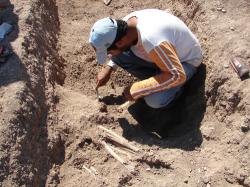 An archaeologist uncovers a skeleton at the Uruk colony. Was this person killed by his/her own people? Photo courtesy Professor Clemens Reichel

Five years ago an archaeological team broke news of a major find that forever changed our views about the history of the Middle East. Researchers from the Oriental Institute, and the Department of Antiquities in Syria, announced in a press release that they had found the “earliest evidence for large scale organized warfare in the Mesopotamian world.” They had discovered that a city in Syria, named Hamoukar, had been destroyed in a battle that took place ca. 3500 BC by a hostile force. Using slings and clay bullets these troops took over the city, burning it in the process. Their motive may have been to gain control over trade in the area – particularly that of copper coming from Southern Turkey.

The likeliest culprit for this act is a city named Uruk – located to the south in modern day Iraq. The artifacts found at Hamoukar which postdate the battle, were created in the same style as those discovered at Uruk.

"If the Uruk people weren't the ones firing the sling bullets, they certainly benefited from it. They took over this place right after its destruction," site excavator Dr. Clemens Reichel told the New York Times, back in 2005. But now archaeologists have made a new discovery that sheds more light on this battle. They have found evidence that an Uruk colony near Hamoukar was also destroyed in this conflict.

So, if the invading army was from Uruk, did they kill their own people? If so why? The information was first released in the 2008-2009 annual report on the Oriental Institute’s website. Before now it has not appeared in popular media. This story is a long one so bear with me.... 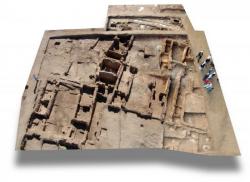 Hamoukar is a city that flourished in northern Syria since at least 4000 BC. It was an “ancient Pittsburgh,” said Dr. Clemens Reichel, who, in addition to leading work at Hamoukar, is now also a professor at the University of Toronto and curator at the Royal Ontario Museum.

The city’s industry and access to material made people come together. The people obtained obsidian, a valuable substance in the ancient world, from volcanoes in modern day Turkey. To the south of Hamoukar archaeologists have found obsidian workshops spread across 280 hectares. These workshops were in use as early as 4500 BC. In later times copper working became important to the city’s economy, as the metal became increasingly popular in the Middle East.

The wealth of Hamoukar is reflected in its crafts. Numerous stamp seals of great artistry were found, one showing a lioness killing a calf or gazelle, another one a reclining leopard, and one showing a lively scene of two bears “kissing” each other. Archaeologists have found thousands of clay sealings – once used to lock doors or containers and impressed with stamp seals. They tell of a bureaucratic system that was almost as complex as our own.

Uruk was a massive city in southern Mesopotamia, and one of the first 10 cities of the world. By 3500 BC it was spread over 260 hectares making it “probably the largest settlement on the planet at that point,” said Professor Reichel. Unlike Hamoukar it was lacking in natural resources such as timber and metal. Yet, despite this lack of resources, its people were on the move. “This Uruk culture from the south started expanding all over the Middle East,” said Reichel.

The settlements it created were urban and had architectural features similar to Uruk itself. This might explain why Uruk was such a rich city. Its expansion and military power may have intimidated its neighbours, including Hamoukar, into giving its people the resources that they needed. “Maybe the Uruk culture put a little bit of pressure, maybe a lot of pressure, on these people to send them the materials that they required,” said Reichel.

One of these colonies was located just outside Hamoukar. It’s a small site, probably occupied by no more than a few hundred people. Its pottery remains were scattered over a hectare. Due to heavy modern agricultural work in this area few architectural remains of the settlement have survived.

When researchers analyzed the pottery they found that much of it consisted of Uruk pottery. “It’s the same stuff that you would find in Southern Mesopotamia, almost 700 km to the south,” said Reichel. Researchers believe that this colony was there to facilitate trade, but was probably not controlled by Uruk’s rulers. “I’m tending more to them being sub-state entities,” said Reichel, private entrepreneurs, perhaps like the British East India Company of more recent colonial times.

This focus on trade would explain some of the goods seen in Hamoukar. One discovery the team made was the impression of a cylinder seal that “shows a motif that is unknown in Syria.” It showed a woman with a “pig-tailed” hair style, and a harp. Virtual counterparts to this seal motive are known from 4th millennium BC sites in southwestern Iran, which at that time formed a cultural unity with southern Mesopotamia. “If you have an Uruk colony somewhere out there that’s probably the way the commodity would have gone (in).” The people of the colony were clearly profiting from this trade.

Dr. Carrie Hritz of Penn State University led the excavation work at the colony. She is conducting fieldwork right now and could not be reached for comment. 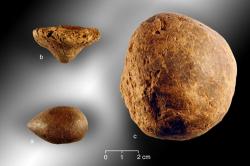 In 3500 BC Hamoukar was destroyed by a violent attack. Slings and clay bullets were the force’s primary weapons.

While incredibly crude, by today’s standards, these weapons could do a lot of damage. The archaeologists tested the slings' effectiveness by creating their own bullets and attacking their own dig house. “The impact is quite remarkable,” said Reichel. At one point he was accidently hit in the head by a colleague who was practicing. “He wasn’t very good at that point, but by god I felt it,” he said. “Once he got really good, the speed, the velocity, that those guys get, is amazing... I’m virtually certain it can be fatal.”

While Professor Reichel survived his encounter, many people at Hamoukar did not. The attackers broke inside the city’s three meter thick city wall, the fighting continued and buildings were set on fire. A siege may have preceded this.

At some point the attackers seem to have run low on ammunition. The archaeologists found examples of sling bullets that had been badly squished. “We found some very curious evidence that they weren’t actually slinging dry sling bullets,” said Reichel. “They weren’t even fire hardened, they were actually wet.” Clay can take up to 24 hours to dry. If you’re in the middle of battle, and you need to make more ammo from clay, you may not have that time. “In the end a wet sling bullet is still better than no sling bullet.” Regardless of the ammo shortage, the intruders won. They appear to have occupied the city for a time. 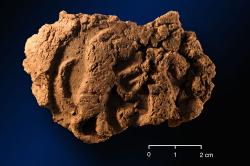 Discovered at Hamoukar, Clay sealing with impression a stamp seal showing a lion standing up on its hind legs, grabbing a goat by its beard; date ca. 3,500 B.C. Photo courtesy Professor Clemens Reichel

Destruction of the colony

It appears that the Uruk colony was destroyed as well. “We found evidence of burning, we found sling bullets... and we found some remains of human bodies,” said Professor Reichel. “A least one body appears to have been unburied,” he said. “It looks as if the colony also found a violent end.” He added, “this is highly preliminary, and more work needs to be done on that. But the fact that we have dead bodies, some destruction and sling bullets, suggests that these guys put up some resistance,” said Reichel.

The pottery remains discovered at the settlement suggest that the colony was destroyed at the same time as the city.

Which brings us to the big question – if Uruk troops destroyed Hamoukar why would they have gone after their own people living in the nearby colony? One possibility is that the soldiers were not aware that they were attacking their own people, a sort of “shoot first ask second” action. Another possibility is that that the Uruk colonists tried to stay out of the conflict but were regarded as “traitors” by the invading army. “Maybe they did stay out – maybe the attacking army said, well, look at those traitors – those bastards – let’s get even with them,” said Reichel.  A third possibility, and the most tantalizing, is that the people of the colony sided with Hamoukar against the intruders – a dicey situation if indeed the invading army came from Uruk.

"Just because you speak the same language and come up from the south doesn’t mean that you’re my friend." It's not such as far-fetched an idea as it seems. As mentioned earlier the colonists appear to have been profiting from their trade.

“If Hamoukar was taken over by anyone, who is going to stand to lose from that?” Asked Reichel, “They were the intermediaries between goods from foreign lands and the mothership back south, and they profited from that position.”  As such, “it would have been advantageous for these guys, of the Uruk colony, to side with the locals, to maintain the status quo, and not support a takeover of the site by anyone. Certainly not by their own people if that’s what happened.”

It must have been a challenging decision. A small group of people (no more than a few hundred) had a choice. Do they fight for their livelihoods? If so, do they turn against their own culture, their own people? “Then and now it might have been the same story – just because you speak the same language and come up from the south doesn’t mean that you’re my friend,” said Reichel. “You may be my brother but not necessarily my friend.”

In the end, regardless of what decision the colony made, it seems to have paid the same price as the city of Hamoukar. “It got burned as well. But more work will be need to figure out the nuts and bolts of how it happened.”