Hamei Yo'av (Israël): Remains of a Byzantine settlement with an impressive wine press

Remains of a Byzantine settlement with an impressive wine press were recently excavated on behalf of the Israel Antiquities Authority near Hamei Yo'av. 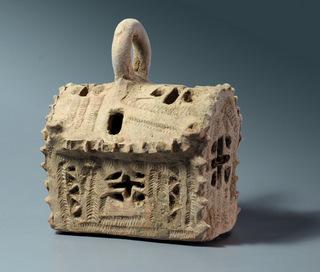 At the center of the treading floor we found the cavity of a screw that enabled to press the grape waste from the compartments and to produce viniger and low quality wine, mentioned in Rabbinic sources as "paupers' wine".The owner of the wine press was probably a Christian, because near it we found a ceramic lantern decorated by five crosses. The lantern was designed as a miniature church building, with an oval opening on one side that enabled to insert an oil lamp. The other sides of the lantern were decorated by geometric impressions creating a design of palm branches. The crosses were carved in the walls of the lantern, so when the lantern was lit in a small room glowing crosses were projected on the walls and the cieling.

Sa'ar Ganor, the Ashkelon district archaeologist of the Israel antiquities Authority pointed-out that "the wine press at Hamei Yoav and three similar wine presses are .located along the ancient road leading from Beth Guvrin to ancient Ashkelon and its port, thus, fascilitating the transportation and exportation of the wine to Ashkelon and from the port of Ashkelon to Europe and North Africa. The wine press will undergo conservation and will be incorporated into the modern complex of the garden event, near the spa of Hamei Yo'av."