Hamasa (Oman): Is the lost capital of the Arab world Tawam ? 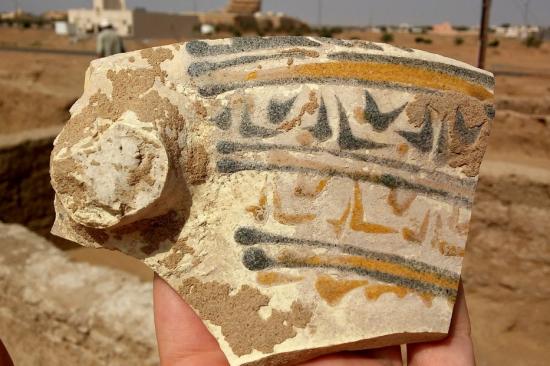 To the untrained eye, the littered sands that run west from the Omani oasis of Hamasa to the border fence that separates Oman and the UAE look like an empty, no man’s land, an overlooked and forgotten buffer zone between the prosperous and heavily irrigated suburbs of Al Ain and the grubby outskirts of its poorer Omani cousin, Buraimi.

Satellite imagery paints an even clearer picture. The border here kinks noticeably westwards as it follows an equidistant line between Hamasa and the Emirati oasis of Al Qattara, separating two very different landscapes.

In Emirati Al Ain, the land between the oases, a traditional site of urban development since at least the Bronze Age, has become clogged by five decades of oil-funded construction and the town’s oases – Al Qattara, Al Hili, Al Jimi, Al Muatared and Al Ain – now sit stranded like islands of vegetation in a sea of asphalt and concrete.

As the Abu Dhabi-based archaeologist Timothy Power explains, it the contrast between Hamasa and its near neighbours and the wealth of archaeology that sits above, beneath and around its sands, that makes the area so exciting.

“We’ve always suspected that there was more and better preserved archaeology on the Omani side of the border,” says the founder of the Buraimi Oasis Landscape Archaeology Project, a collaboration between Muscat’s Sultan Qaboos University, the Omani Ministry of Heritage & Culture and Abu Dhabi’s Zayed University, where the University College London and Oxford-educated Power now works as an assistant professor.

“Partly there has been a lack of development in Oman in comparison to the UAE, but it also makes sense that the earliest settlements would have formed closest to the natural sources of water. This is the last extensive open area of the Al Ain/Buraimi historic landscape that’s left intact.”

With Power as a guide, the secrets of Hamasa’s wider landscape soon come to life. At the northern end of the site, the archaeologist identifies a drift of white pebbles as the remains of the temper from eroded Iron Age bricks – indicating the presence of a village – while a scattering of sharp rocks becomes the remains of a cemetery, and barely perceptible lines in the sand denote field systems and ancient irrigation channels, aflaj, that once connected Hamasa with Al Qattara, the site of one of the area’s most impressive Bronze Age tombs.

Close to these sit a series of mud brick settlements so extensive and impressive that Power describes them as the “Pompeii of the Palms”.

This is the village described by the British explorer Wilfred Thesiger in the late 1940s as slave-trading Hamasa, where kidnapped slaves from Baluchistan, Yemen and Iran could be bought for as little as 230 rupees.

Despite these riches, it is one of Hamasa’s humbler-looking sites that has captured Power’s attention since it was discovered by accident in 2014.

On a mound at the southern end of the site sits the remains of an early-Islamic street flanked by the facades of grand, single-­storey courtyard-type houses, many of whose rooms are still visible, which were revealed when a mechanical digger cut into the hill in search of building materials.

For Power the site is important not just because it is at risk, but also because he believes it sheds light on a period when a local, and now largely overlooked, Wajihid dynasty held sway over a vast territory that extended from the Arabian Gulf to Yemen and all the way to Multan, in modern day Pakistan.

“This is a really interesting period. The years of the early-Islamic period, the eighth to 11th centuries, coincide with the golden age of Islamic civilisation,” the archaeologist explains.

“It’s when the Abbasids established Baghdad as a crucible of Islamic civilisation and created new forms of material culture that were exported across the Indian Ocean and beyond – and that’s what we have here in Buraimi.

“We’ve found a lot of glassware and high-end ceramics, including lustre pottery which has been glazed and fired again with a gold finish.”

To prove his point Power takes only a short walk across the site before he discovers shards of 1,000-year-old ceramics lying around on the surface, including examples of delicate, tin-glazed pottery that may have been imported from as far away as Samarra, Basra and Kufa in modern-day Iraq.

“We’ve also found a lot of material from India, really nice red micaceous ware from Gujarat, as well as small but significant quantities of Chinese porcelain. Sohar, which was the Dubai or Singapore of its day, has this in large quantities, but Kush, old Ras Al Khaimah, doesn’t. This is one of the best-preserved early-Islamic sites in the whole of south-eastern Arabia.”

One of the main questions for Power and his collaborators on the project, such as Nasser Al Jahwari of Sultan Qaboos University, is to establish the age and size of the site.

“A mosque and a falaj and a cluster of quite large and well-built houses, a reasonable ninth or 10th century village, was found on the site of the new Sheikh Khalifa Mosque in Al Ain by Dr Walid Al Tikriti, and our site lies directly to the east of that.

“There is the possibility that they are a part of the same settlement. The question is whether this is a low-density settlement spread out over a large area with lots of little discrete villages and hamlets or a single settlement that’s quite densely built up all the way through.”

For Power, one of the most tantalising prospects about Hamasa is the role he believes it can play in the identification of a “lost capital of the Arabs”, a place historical sources refer to as Tawam. It’s a name that survives in folk memories, as well as the name of various institutions to this day, such as the Tawam Hospital in Al Ain.

“Tawam is understood as the place where the Arabs gathered during the pre-Islamic period. The question that has always been open to interpretation is its location, but nobody has ever been sure about this,” says Power.

“In the mid-19th century, an Omani scholar, Salil ibn Raziq, basically said that Buraimi used to be called Tawam. People picked up on that but have never critically examined the earlier sources.”

In his quest for locating Tawam, Power, a fluent Arabic speaker, has spent a long time poring over texts by early Islamic historians and geographers. These include writers such as the Spanish-Arab Muslim, Al Bakri, who worked in the libraries of Cordoba in the 10th and 11th centuries, and the 12th-century geographer Yaqut Al Hamawi, a Greek slave who was given his freedom and went on to write a geographical encyclopaedia in the libraries of Merv, the capital of the Seljuk caliphate.

“When you start to read those sources, it’s clear that Tawam is a region that stretches from the Hajar Mountains to the Gulf coast, so it’s broadly coterminous with a stretch of territory between Abu Dhabi, Dubai and Buraimi,” Power explains.

“The sources make clear that there is a maritime aspect to Tawam as a region, but they also make reference to a town or a capital called Tawam Al jurf, which means plateau in Arabic.”

For Power, these details can be understood as references to the geography of Oman and the UAE, a landscape that moves from the coast of Abu Dhabi and Dubai, through sabhkha to the dunes of Al Ain and then through to the gravel plains that flow down from Oman’s Hajar Mountains.

“That territory was called al jurf, so Tawam Al jurf has got to be a reference to the interior and to the region of Buraimi/Al Ain,” the archaeologist insists.

For Power, the most likely location of coastal Tawam is the settlement that is now known as the Jumeirah archaeological site in Dubai, remains that were initially thought to belong to the Sassanian period but are now understood to be early-Islamic, thanks to the work of Derek Kennet, a senior lecturer in the department of archaeology at Durham University.

“Jumeirah is a very significant site. It’s probably one of the most monumental early-Islamic sites in Eastern Arabia and I think it could be interpreted as a governorship or as a place where a local bigwig established himself on the coast,” says Kennet, who is an expert in the archaeology of the Gulf in the Islamic period and is currently based at Sultan Qaboos University.

“It’s one of the most significant constructions that we have in the region between the ninth and 12th centuries. There are 10 stone buildings there and one looks like a palace with stucco decoration, another looks like it might have been a caravanserai, and there is a mosque that is probably the oldest in the UAE and possibly in Eastern Arabia.”

When it comes to the identification of Jumeirah and Buraimi as the sites of Tawam and Tawam Al jurf however, Kennet, who has worked on early-Islamic sites at Julfar and Kush in Ras Al Khaimah, remains circumspect.

“It’s difficult to know what Al Ain-Buraimi was doing at this time. It looks like it was a wealthy site but it’s not unique, there are others like Jumeirah and in Ras Al Khaimah, and I suspect there are others that are still to be discovered because this isn’t a period that’s particularly noted by archaeologists,” Kennet explains.

“Tim’s more into historical specificities, finding textual sources to explain why some tribe has duffed-up another tribe, which all sounds very convincing, but if you can find regional evidence for why communities expanded and contracted during this period, then you have to have an explanation that’s based on regional, rather than local, events.”

Power however, remains convinced that his theory about the nature and location of Tawam is supported by the archaeological evidence and the confluence of historical sources he has been able to marshall.

“Al Tabari writes of a Persian sphere of influence along the Batinah plain of Oman and an Arab sphere of influence in the interior with its capital at a place called Tawam,” he says, citing Abu Ja’far Muhammad ibn Jarir Al Tabari, an influential Persian scholar and historian who wrote History of the Prophets and Kings, a universal history of the period from the creation of the Quran to the year 915.

“In that he deals with the events of 893/94, in which there is a dispute amongst different local factions about who should rule in Oman,” says Power.

“One of these factions approaches the Abbasids for outside assistance. The faction who do this are called the Bani Sama and they are based in Buraimi before they base themselves in Sohar, call themselves the Wajihid Dynasty and assume the leadership of the whole region.”

While the archaeology and history of Buraimi and Tawam are clearly a personal passion for Power, they are a matter of personal pride and identity for one his colleagues, Rashid bin Saeed Al Shamsi, the local representative of Oman’s Ministry of Heritage & Culture, the sponsors and the guardians of the Hamasa dig.

Al Shamsi grew up in Hamasa, just a few hundred metres from the site of the excavations.

“People said there were several aflaj in Buraimi that flowed next to each other [in pairs] and that these were called Tawam, which mean ‘twins’ in English, and that is why some people called the Buraimi oasis Tawam, because of the twinning of the aflaj,” the genial civil servant explains.

“I am proud of the existence of these archaeological finds in this place where my grandparents and I lived.”