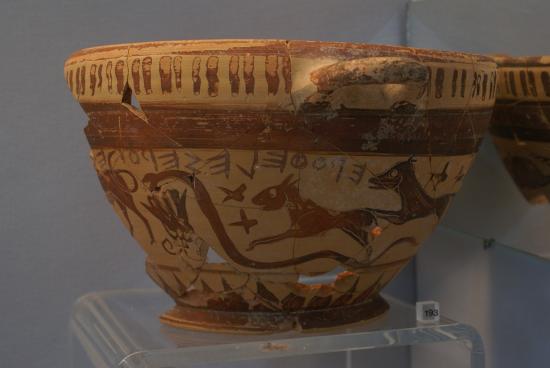 A two-handled wine cup may hold some of the earliest Greek depictions of the constellations. Here, a bull, snake, rabbit/small dog and large dog decorations.
Credit: John Barnes

A 2,600-year-old two-handled wine cup currently on display at the Lamia Archaeological Museum in Greece has long been thought to depict a random assortment of animals.

But the piece of ancient pottery, called a skyphos,may actually contain one of the earliest Greek depictions of the constellations, a new analysis shows.

The study researchers suggested that other ancient artistic representations of animals may also portray constellations, and hold clues to what the early Greeks knew about astronomy, said study researcher John Barnes, a classical archaeology doctoral candidate at the University of Missouri.

"If we go back and re-evaluate other animal scenes that might have been originally categorized as hunting scenes or animal friezes, then maybe we can find more [depictions of constellations] and get a greater understanding of how the ancient Greeks viewed the night sky," Barnes told Live Science.

Most of what's known about early Greek astronomy comes from various literary texts, such as Aratus of Soli's Phaenomena, a poetic text that describes the Greek constellations known by the third century B.C. However, these valuable documents only date as far back as the Classical period of Ancient Greece, which lasted from the fifth to the fourth century B.C.

To learn about how the ancient Greeks viewed the night sky before then, researchers must rely on visual depictions of the sky, such as those found on ceramic pottery — but these artifacts are relatively rare, and what's left of them generally only show one or two constellations. For example, one of the oldest constellation images from Greece comes from a pottery fragment from the Late Geometric period (760 to 700 B.C) found at a site on the island of Ischia in Italy, but it only depicts what may be the constellation Boötes ("the Herdsman").

Barnes didn't set out to find ancient Greek constellation portrayals, but rather stumbled upon the curious skyphos while visiting the Lamia Archaeological Museum. The artifact, which dates back to 625 B.C., was originally discovered in a debris-filled trench next to a temple in the seventh-century acropolis of Halai, which is located about 25 miles (40 kilometers) north of Thebes, Greece.

About a third of the wine cup (including one handle) is missing. What's left of the skyphos depicts an array of animals: a bull with only the back half preserved, a snake, a hare or small dog, a large dog, a scorpion, a dolphin and the front half of a panther or lion. Though the skyphos was labeled as showing a simple animal scene, Barnes immediately thought it showed something else.

"My dad raised me on astronomy, and to me, the snake, rabbit and dog together looked like constellations," Barnes said. "That group jumped out at me."

Animal friezes (horizontal bands of decoration) and hunting scenes are common types of decorations in ancient Greece, but the skyphos's particular collection of animals is atypical, Barnes said. For instance, the dolphin is out of place with the land animals. Additionally, scorpions are uncommon motifs that don't often show up as actual animals, and are instead represented as shield emblems. And while a dog chasing a rabbit is often seen in hunting scenes, the snake underneath the pair is unusual.

What's more likely is that the animals are constellations, Barnes said: The bull is Taurus; the snake is probably Hydra (rather than Serpens or Draco, two other serpent constellations recognized by the Greeks); the rabbit is Lepus; the dog is Canis Major or Canis Minor; the scorpion is Scorpius; the dolphin is Delphinus; and the lion is Leo.

Interestingly, Barnes added, the animals are not arranged on the skyphos in the order they appear in the sky. "If they are not arranged as they are in the night sky, then either the specific arrangement is not important, or they were arranged for another purpose," Barnes said, adding that he thinks there's a seasonal aspect to the arrangement, with the constellations separated into fall, winter, spring and summer groups, in accordance with when they rise and set throughout the year.

Specifically, the bull and (presumably) other constellations from the missing third of the skyphos represent fall; the snake, rabbit and dog make up winter; the dog (again) and scorpion belong to spring; and the dolphin and lion (and perhaps other missing constellations) signify summer, Barnes added.

However, the skyphos likely didn't function as an ancient calendar, and instead merely showed a generalized representation of time throughout the year, Barnes said.

Barnes' analysis of the skyphos was detailed in the April-June issue of the journal Hesperia.