Hafnir (Islande) : New View on the Origin of First Settlers in Iceland

New View on the Origin of First Settlers in Iceland

An archeological find in Hafnir on the Reykjanes peninsula (close to Keflavík Airport) may indicate that some men had started to come to Iceland before the year 874 AD,  the year that has traditionally been considered the first year Nordic men came to Iceland to stay.

“Usually when we find a cabin in Iceland we assume it is an ordinary farm, but then you should find outhouses as well. A thorough search by various means no other houses are found near the cabin and that makes one wonder what type of house it may have been.” 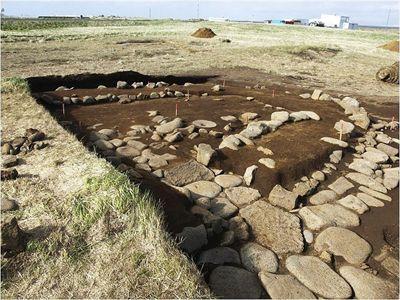 Einarsson adds in an interview with Fréttabladid that C14 analysis indicates that the cabin was deserted between the years 770 to 880 AD, which seems to indicate that it was built “well before the ‘historical first settlement” in the year 874.

Einarsson says that his working theory is that it was an outpost from Northern Europe, Scandinavia or the British isles. Those men came to utilize the resources in Iceland: Birds, eggs, fish, whales and not least walrus teeth.

In Einarson’s view this means that settlement in Iceland developed from being an outpost, habited only part of the year into permanent settlement. “This replaces the myth of a long haired, angry king in Norway that drove the upper class to Iceland. It is complete gibberish and romanticized view of our origins that Icelanders are part of the Scandinavian upper class.”

Einarsson adds that old fables on the origin of settlement in Iceland have now been proved false. However, new theories will not easily make it into history books because of the natural conservative view of historians.

The research in Hafnir is not completed. This summer the middle part of the cabin will be dug up and the work concluded next year.

Not everyone agrees to this theory. Indi-Uni will have more on the controversy in the near future.