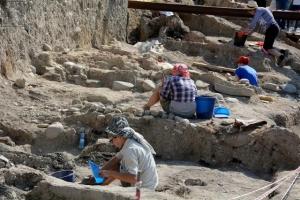 Commuters on Georgia’s main highway could scarcely have imagined that they were driving past something that may change the history of scripts as we know it.
Today, archaeologists of Ivane Javakhishvili Tbilisi State University (TSU) have discovered a one line inscription of as yet unknown Georgian writing, dating back 2700 years on the altar pedestal of the 7th century BC temple dedicated to a fertility goddess at the Grakliani Hill, in the eastern Kaspi region.
This new unique discovery suggests that the alphabet was used on the territory of Georgia 2700 years ago, far earlier than previously thought.
Scientists claimed that this is the oldest script to be discovered in the whole Caucasus region.
The archaeologists said the writing had nothing similar to it and it would become "an extremely fascinating piece” for foreign scientists.
Head of the Institute of Archaeology of Georgia’s State University Vakhtang Licheli said with this "significant discovery”, Georgia steps up among the elite civilizations that used their written languages thousands of years ago.
"The writings on the two altars of the temple are really well preserved. On the one altar several letters are carved in clay while the second altar’s pedestal is wholly covered with writings,” Licheli said. 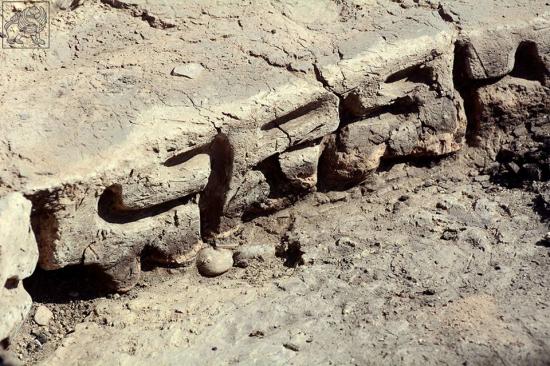 This new unique discovery suggests that the alphabet was used on the territory of Georgia 2700 years ago, far earlier than previously thought.

The TSU professor believed that, "the inscription is so important, that goes beyond the limits of Georgian science and will be the subject of an international study. The new discovery will change the particular stage of the history of the world’s manuscripts.”
To share this unique discovery with the public, Georgia’s Minister of Culture and Monuments Protection Mikheil Giorgadze announced that this site will become an open air museum for visitors, to be able to enjoy multi-layer settlements from different periods in history.
Glakliani Hill is believed to be the only monument which revealed almost all of the layers of the human development, a non–stop 300,000 year chain from the Stone Age onward.
Ten layers of the site have been excavated, through which various ancient weapons, worshiping icons and pharmacological devices were exposed.
Grakliani Hill is located in Igoeti village, Kaspi region, on the top of a hill that’s situated on the bank of the River Lekhura, near the Tbilisi- Senaki-Leselidze highway.
Archaeologists and scientists of the Tbilisi State University (TSU) also uncovered ancient treasures when works were conducted at the highway in 2007.
Meanwhile excavations of the settlement on the eastern slope and the necropolis on the south-western part of the hill revealed that the site had been occupied between the Chalcolithic and the Late Hellenistic periods.
The most interesting remains of buildings belong to the second and first millennium BC.
An architectural complex consisting of three main rooms and three store-rooms, dating back to around 450-350 BC, was discovered in the western part of the hill’s lower terrace.
Therefore, burial grounds from the various periods in history were discovered in the western part of the hill's southern slope. The earliest cemetery discovered dated back to the Early Bronze Age.