Gotland (Suède) : a cog used in the Baltic between the 12th and the 14th centuries, has been discovered

What looks very much like a cog, a ship used in the Baltic between the 12th and the 14th centuries, has been discovered in the waters between the islands of Gotland and Öland off the east coast of Sweden.

The vessel showed up in sonar pictures of the area, causing experts on shipwrecks to believe that they may have the world’s oldest intact shipwreck on their hands. 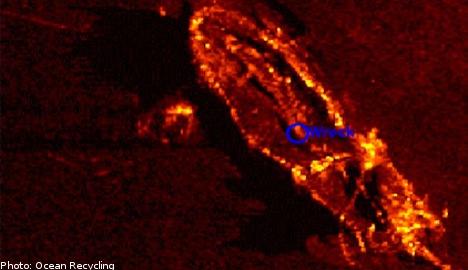 “The hairs at the back of my neck stood up when I first saw the pictures,” said shipwreck expert Erik Bjurström to the local Barometern daily.

Because of the age of the ship and the location, historians cannot but wonder if it in fact could be the legendary ship that carried the Danish king Valdemar Atterdag home after his sacking of Visby on Gotland, in 1361 AD.

"There is a theoretical possibility that it is Atterdag's ship," said Richard Lundgren at exploration firm Ocean Recycling to The Local on Friday.

Wanting to limit the power of the hanseatic trade league in the area, King Valdemar IV of Denmark decided to attack the Baltic island of Gotland. According to legend he hated the Gotlanders and especially the city of Visby, where he had heard that they had made up songs to mock him.

Once in possession of the city of Visby, the Danish king, wanting to humble the burghers, allegedly set up three huge beer barrels saying that if the barrels weren't filled with silver and gold within three days, he would turn his men loose to pillage the town.

But the barrels were filled before nightfall of the first day and after the churches had been stripped of their riches, the loot was loaded on Danish ships and carried home.

However, one ship was lost on the way and although sought by many a shipwreck expert, it has never been found.

After studying the images Bjurström it is almost certain that what the sonar showed is a medieval cog.

The discovered ship was found at a depth of 100 metres in a secret location between the two Baltic isles. The sonar pictures show a small vessel, 28 metres long and seven metres wide.

No cogs have ever been found in the area despite the extent of their use and the perfect conditions of the Baltic Sea for wreck preservation.

The seabed of the Baltic is flat, there is no shipworm, and the oxygen levels in the water are low enough to make it ideal for wrecks to remain intact, according to Barometern.

The paper reports that scientists are planning to send down remotely operated vehicles (ROV’s) with cameras in the next few days. The hope is that the ROV images will provide the scientists with a better view and confirm that it is indeed a cog embedded in the ocean floor.

With better images scientists hope to be closer the answer whether this is the Atterdag ship or not, and if there will be treasure from the sacking of Visby aboard the vessel.

"Of course we are hoping for that. But for me it is enough f they can verify that it is a cog because that would be a world sensation. If it has Valdemar Atterdag's treasure onboard it will be even better," Bjurström said.

This is the second find of a shipwreck in the area in the last few weeks. In the beginning of July a 16th century ship was discovered outside the coast of Gotland.

Divers, looking specifically for the legendary Atterdag ship were excited about the find, although they were fairly sure from the outset that the ship was from a later era than the 14th century.

“We don’t necessarily think that this is the wreck of the ship carrying the three barrels of gold, silver and valuables, taken from the Gotlanders. But in any case it is a very interesting ship, it’s sensational,” Richard Lundgren said to daily Dagens Nyheter at the time.

But this time, the ship is likely to be from the right era, as it has one mast and not two, as a later ship would.

"No one has ever found an intact cog in deep water before. In all probability it is the world's oldest intact wreck that has been discovered. That's what I believe," Bjurström said.