No one knows why the village was abruptly abandoned 50 years after it was built. 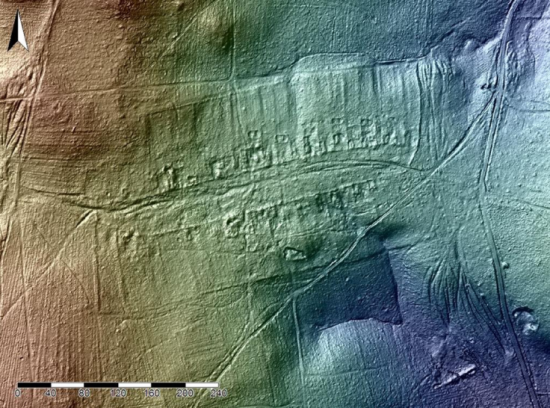 After more than 70 years of searching, the 700-year-old abandoned village of Goschwitz has been rediscovered in the vicinity of Strzelin in south-west Poland.

Goschwitz is thought to have been founded in the late 13th century by the Duke of Löwenberg, Bolko I the Strict, after he acquired the territory from a local noble family. The land was hoped to be a good investment, and a small village was established on it.

However, it didn't all go to Bolko's plans. The settlement was abandoned remarkably quickly, after only about 50 years of occupation. After this date, references to Goschwitz quickly peter out in historical documents. The forest in the area grew over the site, obscuring it from view from ground level.

Researchers have nevertheless been hunting for the village since before the Second World War. Now, without putting a single shovel in the ground, Goschwitz has been identified conclusively using airborne laser scanning.

This technology revealed that the village was just 225m wide and 405m long. The village planners used a base unit length of 45m, distinct from typical layouts in nearby towns from this period.

Goschwitz was made up of about 20 farmhouses of different sizes arranged around a central square. The houses had stone foundations but probably used timber framing, which has not survived.

Archaeologist Maria Legut-Pintal of Wroclaw University of Science and Technology, who made the discovery, compares the site to Pompeii, as it captures a narrow window in Polish history. Despite the discoveries made so far, the reason why the Goschwitz village was abandoned is still uncertain. At present, there are two hypotheses.

The outlines of the fields of the villagers can still be seen.M. Legut-Pintal

"One possibility is that it was abandoned for economic reasons – the shape or layout of village typical for lowland areas was used in upland area. The quality of soil was poor, so economic bases were insufficient – it was simply too hard to live there," Legut-Pintal told IBTimes UK.

"The more interesting hypothesis, but less likely, is that the village was destroyed during the Hussite Wars."

The Hussite Wars were a series of crusades by adherents of the Roman Catholic Church on the central European Hussites. However, the Hussite wars were fought from the early 15th century, meaning that Goschwitz was potentially already abandoned by the time they began.

"We will be able to answer this question only after excavation studies, when we establish the exact time of village abandonment," Legut-Pintal concluded.

At ground level, the remains of Goschwitz are entirely concealed from the naked eye.M. Legut-Pintal