Gokstad Ship (Norvège): Dealing with the doldrums on a Viking voyage

The outline of a foot on the Gokstad Ship gives us an inkling of what it might have been like for Vikings to cross the ocean. 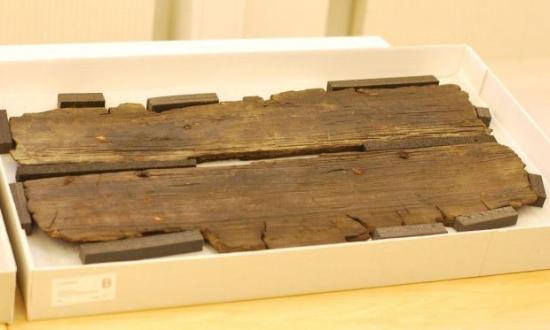 The floorboard from the Gokstad ship. (Photo: Hanne Jakobsen)

He’s crowded into a sleek sailing ship with 65 other men. Scarcely room to move. It’s been days since anybody has seen land − longer since anyone bathed. The old-timers’ repeated tales of bygone raids and voyages are beginning to wear thin.

His place is behind an oar, but there is no need to row continuously on the North Sea. With wind in the sail, the boat surges towards England, where riches await.

But what is there to do while waiting to reach a foreign coast?

Maybe it was a teenager engaged in a Viking version of tagging a school desk. In any case, someone took out his knife, bent down and traced the outline of his foot on the deck of the Gokstad Ship.

Today, 1,100 years later, researcher and storage manager Hanne Lovise Aannestad shows us a couple of deck planks that are among her favourite artefacts at the Museum of Cultural History in Oslo.

“I think this particular item gives us a clear idea of what it was like to be living in the Viking Age, in a way that few other things do,” she says.

The Gokstad Ship was excavated in the late 1800s and is a permanent feature of the Viking Ship Museum at Bygdøy in Oslo.

For about a decade, from 890 to 900, the ship sailed on ocean voyages. The holes cut for oars along the upper hull are well worn, evidence that the ship had been used for more than just a funeral ceremony.

The ship’s deck was fitted with loose floorboards. These could be lifted up so that supplies and plundered treasure could be stored below deck. The outline of a foot covers two of these floorboards.

“My guess is that some time or another a person was bored and simply traced his foot with his knife. It’s a kind of an ‘I was here’ message,” says Aannestad.

A person behind the myths

There are two outlines of feet on the Gokstad Ship. One is a distinct right foot. The other is a weaker outline of a left foot on a different floorboard.

The ship was buried on land in a massive grave and the loose floorboards were helter-skelter when it was excavated. So we don’t know whether the planks with left and right feet had been originally next to each other or had been the capricious result of two separate individuals.

This makes the footprints no less fascinating for Aannestad: 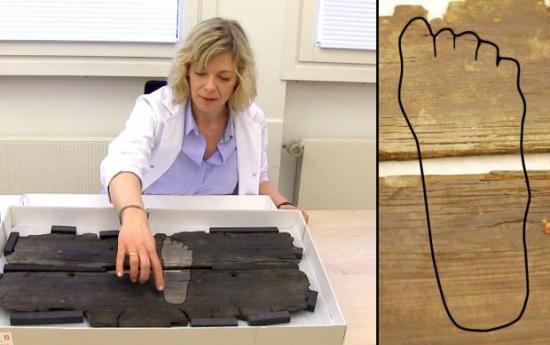 Hanne Lovise Aannestad of the Museum of Cultural History in Oslo points at the footprint of a bored Viking. The footprint is enhanced by ScienceNordic. (Photo: Hanne Jakobsen/Per Byhring)

“This is an artefact that gives us an empathetic understanding of a person behind the myths of the Viking Age. We know something about major events, of wars and battles and the building of kingdoms and all that, but this little outline puts you right down at the level of an individual,” she says.

“You can’t add a chapter to history with this. It shows that Vikings had feet, but we knew that. Yet it gives us an immediate emotional connection on a general human level. These were real people who went on Viking voyages, not cartoonish stereotypes. The voyages could be boring as well as harrowing.”

The outlines weren’t discovered until 2009. The floorboards were being moved from the museum at Bygdøy when one of Aannestad’s colleagues spotted the carved footprints.

So even 130 years after its excavation, researchers continue to make discoveries about one of Norway’s most famous and thoroughly studied vessels.

A young man on his first voyage?

Aannestad has measured one of her own feet against a tracing of the carved outline – because no one can actually step on the fragile floorboard, of course. The foot was smaller than hers, and even though people were generally shorter in the Viking days, this was probably a little person.

“It could have been a young man. People were treated as adults much earlier in those days. They took off sooner than we would allow young boys to do today,” says Aannestad.

So we are free to let our imaginations run:

A young lad is bored with the tedium of a long voyage. On a whim he looks down at his foot and considers something that would provide a little diversion.

He was sufficiently dedicated to the task to include his toenails in his outline.

Maybe this was his first voyage and the drawing of his foot took his mind off the test of his manhood awaiting him in English or Irish towns? Perhaps this outline is the foot of a person who grew famous and whose name has been passed down to us through the sagas?

“We can only speculate. We’ll never know. In any case, we see the outline of an individual here,” says Aannestad.