The world's oldest temple, Göbekli Tepe in southern Turkey, may have been built to worship the dog star, Sirius.

The 11,000-year-old site consists of a series of at least 20 circular enclosures, although only a few have been uncovered since excavations began in the mid-1990s. Each one is surrounded by a ring of huge, T-shaped stone pillars, some of which are decorated with carvings of fierce animals. Two more megaliths stand parallel to each other at the centre of each ring. 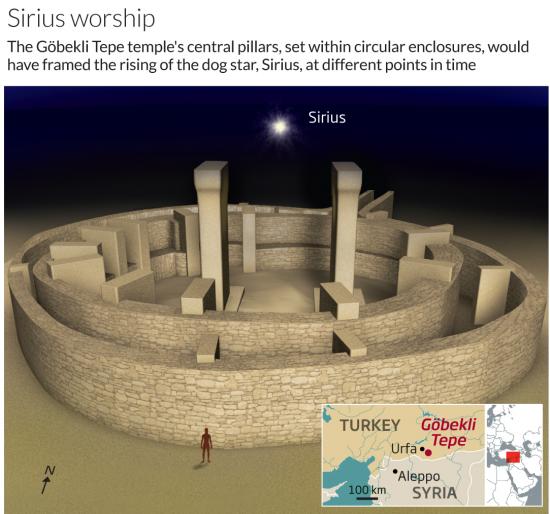 Göbekli Tepe put a dent in the idea of the Neolithic revolution, which said that the invention of agriculture spurred humans to build settlements and develop civilisation, art and religion. There is no evidence of agriculture near the temple, hinting that religion came first in this instance.

"We have a lot of contemporaneous sites which are settlements of hunter-gatherers. Göbekli Tepe was a sanctuary site for people living in these settlements," says Klaus Schmidt, chief archaeologist for the project at the German Archaeological Institute (DAI) in Berlin.

But it is still anybody's guess what type of religion the temple served. Giulio Magli, an archaeoastronomer at the Polytechnic University of Milan in Italy, looked to the night sky for an answer. After all, the arrangement of the pillars at Stonehenge in the UK suggests it could have been built as an astronomical observatory, maybe even to worship the moon.

Magli simulated what the sky would have looked like from Turkey when Göbekli Tepe was built. Over millennia, the positions of the stars change due to Earth wobbling as it spins on its axis. Stars that are near the horizon will rise and set at different points, and they can even disappear completely, only to reappear thousands of years later.

Today, Sirius can be seen almost worldwide as the brightest star in the sky – excluding the sun – and the fourth brightest night-sky object after the moon, Venus and Jupiter. Sirius is so noticeable that its rising and setting was used as the basis for the ancient Egyptian calendar, says Magli. At the latitude of Göbekli Tepe, Sirius would have been below the horizon until around 9300 BC, when it would have suddenly popped into view.

"I propose that the temple was built to follow the 'birth' of this star," says Magli. "You can imagine that the appearance of a new object in the sky could even have triggered a new religion."

Using existing maps of Göbekli Tepe and satellite images of the region, Magli drew an imaginary line running between and parallel to the two megaliths inside each enclosure. Three of the excavated rings seem to be aligned with the points on the horizon where Sirius would have risen in 9100 BC, 8750 BC and 8300 BC, respectively (arxiv.org/abs/1307.8397).

The results are preliminary, Magli stresses. More accurate calculations will need a full survey using instruments such as a theodolite, a device for measuring horizontal and vertical angles. Also, the sequence in which the structures were built is unclear, so it is hard to say if rings were built to follow Sirius as it rose at different points along the horizon.

Ongoing excavations might rule out any astronomical significance, says Jens Notroff, also at DAI. "We are still discussing whether the monumental enclosures at Göbekli Tepe were open or roofed," he says. "In the latter case, any activity regarding monitoring the sky would, of course, have been rather difficult."