Discovery of a suspected vampire burial site is not a first for archaeologists. 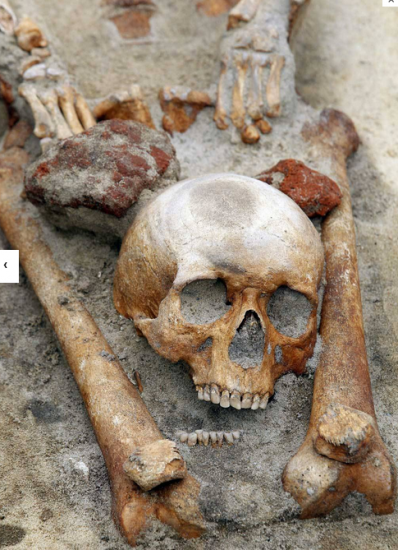 Polish archaeologists believe this skeleton with the head between the legs was found in a 'vampire' grave. Photograph by Andrzej Grygiel, European Pressphoto Agency

When archaeologists opened an ancient grave at a highway construction site near Gliwice, Poland, they came across a scene from a horror movie: a suspected vampire burial.

Interred in the ground were skeletal remains of humans whose severed heads rested upon their legs—an ancient Slavic burial practice for disposing of suspected vampires, in hopes that decapitated individuals wouldn't be able to rise from their tombs.

But the recent Polish discovery isn't the first time that archaeologists have stumbled upon graves of those thought to be undead. Here's what science has to tell us about a few of history's famous revenant suspects.

How to Bury the Undead 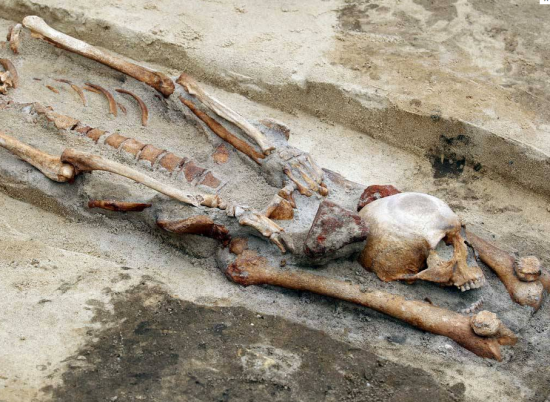 To date, researchers have reported suspected vampire burials in both the Old World and the New World.

In the 1990s, University of British Columbia archaeologist Hector Williams and his colleagues discovered an adult male skeleton whose body had been staked to the ground in a 19th-century cemetery on the Greek island of Lesbos. Whoever buried the man had driven several eight-inch-long iron spikes through his neck, pelvis, and ankle.

"He was also in a heavy but nearly completely decayed wooden coffin," says Williams, "while most of the other burials [in the cemetery] were simply in winding sheets in the earth." Clearly, someone did not want the man to escape the grave. But when physical anthropologists studied the skeleton, Williams adds, they "found nothing especially unusual about him."

More recently, an archaeological team led by University of Florence forensic anthropologist Matteo Borrini came across another suspected vampire burial on the Italian island of Lazzaretto Nuovo. In this case, the body proved to be that of an elderly woman, who was apparently interred with a moderate-sized brick in her mouth—a recorded form of exorcism once practiced on suspected vampires in Italy.

Then there's the New World. In the 1990s, archaeologists working in a small 18th- to 19th-century cemetery near Griswold, Connecticut, came across something highly unusual: the grave of a 50-something-year-old man whose head and upper leg bones had been laid out in a "skull and crossbone" pattern.

Upon examination, physical anthropologists determined that the man had died of what was then called "consumption"—and what is now known as tuberculosis. Those who suffer from this infectious disease grow pale, lose weight, and appear to waste away—attributes commonly linked both to vampires and their victims.

"The vampire's desire for 'food' forces it to feed off living relatives, who suffer a similar 'wasting away,'" the researchers noted in a paper in the American Journal of Physical Anthropology.  To play it safe, local inhabitants seem to have decapitated the body of the suspected vampire.

Most archaeologists now think that a belief in vampires arose from common misunderstandings about diseases such as tuberculosis, and from a lack of knowledge about the process of decomposition.

Although most 19th-century Americans and Europeans were familiar with changes in the human body immediately following death, they rarely observed what happened in the grave during the following weeks and months.

For one thing, rigor mortis eventually disappears, resulting in flexible limbs. For another, the gastrointestinal tract begins to decay, producing a dark fluid that could be easily mistaken for fresh blood during exhumation—creating the appearance of a postprandial vampire.

When and where the next one will appear is anyone's guess.