Markings in red paint found within the Great Pyramid by a camera-toting robot are likely numerals used by builders. 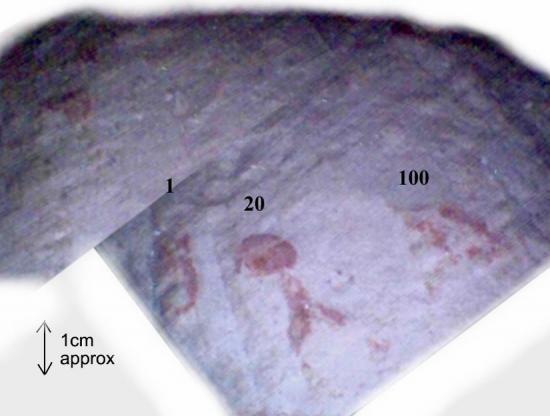 Hieroglyphs written in red paint on the floor of a hidden chamber in Egypt's Great Pyramid are numerical signs meaning 100, 20 and 1 – Djedi Team

Mysterious hieroglyphs written in red paint on the floor of a hidden chamber in Egypt's Great Pyramid of Giza are just numbers, according to a mathematical analysis of the 4,500-year-old mausoleum.

Shown to the world last month, when the first report of a robot exploration of the Great Pyramid was published in the Annales du Service Des Antiquities de l'Egypte (ASAE), the images revealed features that have not been seen by human eyes since the construction of the monument.

Researchers were particularly intrigued by three red ochre figures painted on the floor of a hidden chamber at the end of a tunnel deep inside the pyramid.

"There are many unanswered questions that these images raise," Rob Richardson, the engineer who designed the robot at the University of Leeds, told Discovery News. "Why is there writing in this space? What does the writing say? There appears to be a masonry cutting mark next to the figures: why was it not cut along this line?" Richardson wondered.

Luca Miatello, an independent researcher who specializes on ancient Egyptian mathematics, believes he has some answers.

"The markings are hieratic numerical signs. They read from right to left, meaning 100, 20, 1. The builders simply recorded the total length of the shaft: 121 cubits," Miatello told Discovery News.

The royal cubit, the ancient Egyptian unit of measurement used in the construction of the pyramid, was between 52.3 and 52.5 cm (20.6 to 20.64 inches) in length, and was subdivided into seven palms of four digits (four fingers) each, making it a 28-part measure.

According to Miatello, who has written about the pyramid's numerical patterns in the journal Ankh, and also more recently in PalArch's Journal of Archaeology of Egypt/Egyptology, multiples of 7, 9 and 11 cubits occur frequently in the design of the Great Pyramid.

Built for the pharaoh Cheops, also known as Khufu, the Great Pyramid is the largest of a family of three pyramids on the Giza plateau, on the outskirts of Cairo and has long been rumored to have hidden passageways leading to secret chambers.Archaeologists have long puzzled over the purpose of four narrow shafts deep inside the pyramid since they were first discovered in 1872.

Two shafts, extend from the upper, or "King's Chamber" and exit into open air.

But the lower two, one on the south side and one on the north side in the so-called "Queen's Chamber" disappear within the structures, deepening the pyramid mystery.

Robots have previously explored and sent back pictures from these 8-inch-square shafts, indicating that both shafts are blocked by a stone door. These stones are approximately equidistant (63.6 meters) from the Queen’s Chamber.

The new robot, named Djedi after the magician who Khufu consulted when planning the layout of this pyramid, has gone further than anyone has ever been before in the monument.

The project, led by Zahi Hawass, Egypt's Minister of State for Antiquities Affairs, began with the exploration of the southern shaft of the Queen's Chamber.

The robot was able to climb inside the walls of the shaft while carrying a bendy camera, small enough to fit through a small hole in a stone door at the end of the tunnel.

This gave researchers a clear view into the chamber beyond. It was at that time that the micro snake camera sent back images of 4,500-year-old markings.

"The floor of the chamber has a red ochre mason's line running parallel to the shaft from just beyond the rear of the first blocking stone to the second blocking stone," Hawass and colleagues write in ASAE.

"There is also a black mark where the red line meets the second blocking stone. To the right of, and at approximately 45 degrees to the red line are three red ochre figures," they added.

According to Miatello, the red markings and figures were made by the workers during the pyramid construction.

"Precise mathematical rules were followed in the design of the pyramid's tunnels," Miatello said.

Hawass and colleagues agree that the markings are mason's marks or hieratic characters.

"The two main figures are similar to the hieratic number 21," they write in their report.

"The signs are not easy to read, but Dr. Miatello's reading is entirely plausible," Allen, author of "The Ancient Egyptian Pyramid Texts, Writings from the Ancient World" and a leading expert on hieroglyphics, told Discovery News.

The Djedi project researchers expect to carry additional analysis of the red ochre markings in August, when the robot, equipped with a higher resolution bendy camera will return to the pyramid for further surveys.