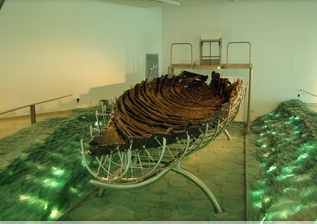 The Sea of Galilee boat is the most famous artifact that we can now associate with this newly discovered town. It dates back to either the first century B.C. or A.D. Although the boat was uncovered in 1986 the discovery of the town means we now know it was found on the ancient town's shoreline. CREDIT: Photo by Berthold Werner, released into public domain, courtesy Wikimedia

A town dating back more than 2,000 years has been discovered on the northwest coast of the Sea of Galilee, in Israel's Ginosar valley.

The ancient town may be Dalmanutha (also spelled Dalmanoutha), described in the Gospel of Mark as the place Jesus sailed to after miraculously feeding 4,000 people by multiplying a few fish and loaves of bread, said Ken Dark, of the University of Reading in the U.K., whose team discovered the town during a field survey.

The archaeologists also determined that a famous boat, dating to around 2,000 years ago, and uncovered in 1986, was found on the shoreline of the newly discovered town. The boat was reported on two decades ago but the discovery of the town provides new information on what lay close to it.

The evidence the team found suggests the town was prosperous in ancient times. "Vessel glass and amphora hint at wealth," Dark wrote in an article published in the most recent edition of the journal Palestine Exploration Quarterly, while "weights and stone anchors, along with the access to beaches suitable for landing boats — and, of course, the first-century boat … all imply an involvement with fishing."

The architectural remains and pottery suggest that Jews and those following a polytheistic religion lived side by side in the community. In addition, the researchers found that the southern side of the newly discovered town lies only about 500 feet (150 meters) away from another ancient town known as Magdala. 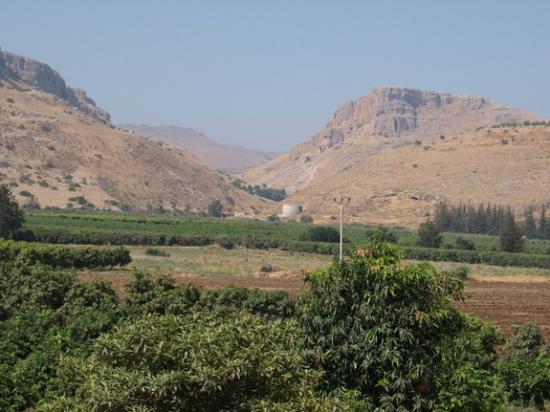 View looking southwest showing the mountains bounding the Ginosar Valley in Israel. Archaeologists found pottery remains, cubes known as tesserae and, in the modern town, architectural fragments indicating a town flourished in the area from the second or first century B.C. until after the fifth century A.D. Credit: Photo copyright Dr. Ken Dark

Fields between the modern-day town of Migdal and the sea coast contained hundreds of pottery pieces dating from as early as the second or first century B.C. to up to some point after the fifth century A.D., the time of the Byzantine Empire, the archaeologists found. The artifacts suggest the town survived for many centuries.

Also among their finds were cubes known as tesserae and limestone vessel fragments, which were "associated with Jewish purity practices in the early Roman period," indicating the presence of a Jewish community in the town, Dark told LiveScience in an email.

Some of the most impressive finds, however, were not made in the fields but rather in modern-day Migdal itself. The archaeologists found dozens of examples of ancient architectural remains, some of which the modern-day townspeople had turned into seats or garden ornaments, or simply left lying on the ground. In one instance, the researchers found more than 40 basalt ashlar blocks in a single garden.

After talking to the local people, and trying to identify the source and date of the findings, the researchers determined that many of the architectural remains came from the local area and likely were part of this newly discovered town.

Roman column fragments, along with the top of a rotary quern (for grinding), lying on the side of a road in the modern-day town of Migdal and believed to be part of a newfound ancient town. Credit: Photo copyright Dr. Ken Dark

These remains included a number of ancient column fragments, including examples of capitals (the top of columns) carved in a Corinthian style. "This settlement may have contained masonry buildings, some with mosaic floors and architectural stonework," Dark wrote in his paper.

The finds also included a pagan altar, made of light-gray limestone and used in religious rituals by those of a polytheistic faith, Dark said.

In the New Testament, Dalmanutha is mentioned only briefly in the Gospel of Mark.

The gospel says that after feeding 4,000 people by miraculously multiplying a few fish and loaves of bread, Jesus "got into the boat with his disciples and went to the region of Dalmanutha. The Pharisees came and began to question Jesus. To test him, they asked him for a sign from heaven. He sighed deeply and said, 'Why does this generation ask for a sign? Truly I tell you, no sign will be given to it.'Then he left them, got back into the boat and crossed to the other side." (Mark 8:10-13, New International Version)

It's likely that the newly found town's name is among the few place-names already identified by other researchers relating to the Ginosar valley shore, and one of those places is Dalmanutha, Dark said.