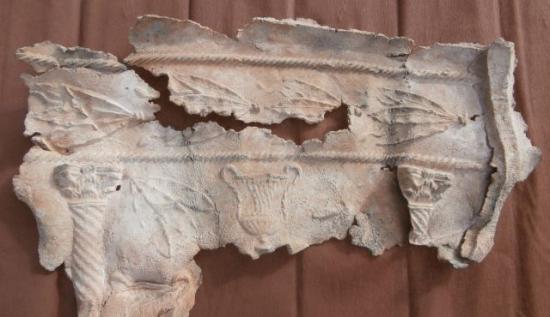 The fragment of coffin found in the cellar of Kibbutz Gesher Haziv in Israel.Photo by Dr. Mordechai Aviam and Dina Shalem

For decades, a fragment from an ancient lead coffin lay stashed away in the basement of a kibbutz library. But a few months ago, a librarian came across it and showed it to researchers from the Kinneret Institute for Galilean Archaeology - who realized that they had a rare find. The fragment of coffin found in the cellar of Kibbutz Gesher Haziv was absolutely identical to one found about a century earlier in the Lebanese city of Tyre.

The fragment dates from the late Roman era, the second or third century C.E., say the archaeologists.

Nobody in the western Galilee kibbutz remembers who found it, says Dr. Mordechai Aviam, who studied the fragment together with Dr. Dina Shalem. It was however apparently discovered in an area known as the "eastern cemetery" of Tel Akhziv, an ancient site on which the large Arab town of ez-Zib was later built, abandoned during the War of Independence in 1948.

Back then, it wasn’t the norm to hand antiquities over to a state agency. So kibbutz members who found antiquities in their fields would use them to ornament the kibbutz. The lead coffin fragment was displayed in the library for a while, but was eventually stuck into a corner and forgotten.

The eastern cemetery of ancient Akhziv lies on the northern edge of Gesher Haziv. The nearby tell has been populated for thousands of years: Graves have been found there from the late Bronze Age (roughly 3,000 years ago, the end of the second millennium B.C.E.), the Iron Age that followed, and also the Persian period (roughly 500 to 1000 B.C.E.).

The lead coffins of Akhziv were discovered during the period of the British Mandate, before the State of Israel's birth; Aviam believes there are more to be discovered.

Aviam and Shalem compared the decorations on the coffin fragment to those of other lead coffins found in Israel and concluded that it belonged to a group of coffins made in Tyre in the second or third century C.E. But the real surprise was when they discovered it was identical to a coffin found in Tyre, some 27 kilometers to the north.

The decorations on the Tyre coffin, which is whole, are identical to those on the fragment from Gesher Haziv. The decorations were also ordered in exactly the same way. The conclusion is they were made with the same mold.

The process of making decorated lead coffins was complex. First, slabs of clay were prepared with the same dimensions as the coffin’s sides and lid. Then, while these slabs were still soft (“leather-hard," as they say in the pottery industry), they were imprinted with the decorations using meticulously carved wooden stamps.

Once every clay panel was decorated to the satisfaction of the artisan making the coffin, the lead was cast over it. The lead plates were then soldered together and the coffin was sold to whoever had commissioned it.

Previous studies have shown that Tyre and Sidon were important centers for making lead coffins. Many such coffins were sold to people in the northern part of what is now Israel.

A local lead coffin industry also developed in the Land of Israel itself. Researcher Levi Yitzhak Rahmani, who wrote a book about the lead coffins found in Israel, speculates that such coffins were made in Acre, Ashkelon and Jerusalem.

To date, some 110 lead coffins have been found in Israel, in three main geographic regions. The largest number was found in the area from Caesarea northward. Lead coffins were also found in the Jerusalem and Ashkelon regions, but in much smaller numbers. All of these coffins were made between the second and fifth centuries C.E.

But the coffin fragment from Gesher Haziv is the first one found in the Land of Israel that is completely identical to a lead coffin from Tyre. They were apparently cast from the same mold. The discovery thus attests to the close ties that existed in ancient times between the Land of Israel, especially its northwest coast, and the area around Tyre.

Trading ties were well established back in King Solomon’s day, in the tenth century B.C.E.: Solomon obtained a shipment of cedar wood from King Hiram of Tyre to build the Temple.

Although coffins were also made in the Land of Israel, trade evidently extended to the import of lead coffins from Tyre to the western Galilee, which, in the Roman era, was part of the province of Phoenicia. Essentially, the northwest coast of what is now Israel was the south of Phoenicia.

The lead coffins were very ornate, Aviam said. Some of the decorations were religious or ethnic symbols. Jewish lead coffins typically have a seven-branched menorah, while later Christian coffins have crosses. There are pagan lead coffins with pictures of gods, nude figures, temples and mythological creatures, such as the one from Gesher Haziv.