Are You Up on Geno Research Down Under?

Genographic Project scientists in Melbourne, Australia have just published their exciting new finds from years of work across the vast southern continent. Detailed in a new paper in the American Journal of Physical Anthropology, Dr. Robert Mitchell, student Nano Nagle, and their team of researchers worked with 657 Aboriginal Australian men mapping and dating the genetic diversity of the Australian Y chromosome.

Earlier work in Australia had suggested that Aborigines were descendants from the first migrants to leave Africa some 60 thousand years ago. The hypothesis suggests that when modern humans left Africa they remained in tropical regions, migrating north, then east and south around the Indian Ocean through India, Southeast Asia, eventually reaching Australia. Thus, understanding the origins of Australians is paramount to mapping the earliest human migrations.

The data from Nagle and Mitchell’s work supports an early entry into Australia through New Guinea some 50,000 years ago. However, their findings also show that indigenous New Guineans and Aboriginal Australians had been living isolated from one another for more than 30,000 years. Interestingly, before there was even an Australia and New Guinea, lower ocean levels exposed the seafloor between the two lands creating a supercontinent known as Sahul. Never having been connected to Asia, Sahul became the evolutionary birthplace to unique fauna such as marsupials, like kangaroos and koalas, which are found nowhere else in the world. These were the animals and plants the early migrants would have encountered upon first reaching the land down under. And these early migrants are the ancestors of modern Aboriginal Australians.

The Genographic study of Australian Aborigines included larger wider coverage of the continent than any previous work, and the percentage of rare haplogroups—genetically-related groups who share a common ancestor—was high and geographically distributed. A total of 292 individuals belonged to one of several uniquely Australian haplogroups: C-M347, K-M526, S-P308 or M-186 found throughout Queensland, South Australia and the Northern Territories. Five men were belonged to the ancient haplogroup C-M130, for example, with no close relatives outside the continent. Whereas haplogroup C-M347 was present in 19% of the Aboriginal men, yet it is branch unique to Australia. 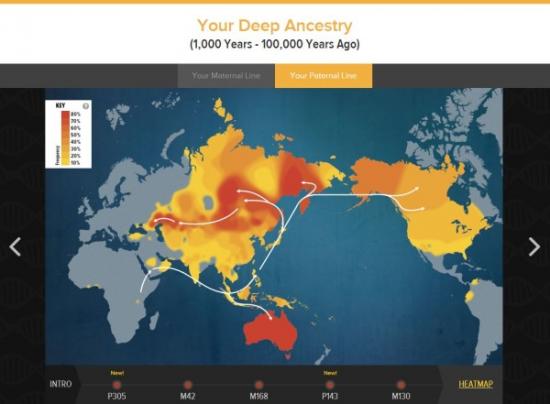 n contrast, 56 percent of Aboriginal men had paternally-inherited Y chromosomes not native to Australia, and commonly associated with either Europe or Asia. This European genetic influence denotes the impact of the centuries-long colonization and the subsequent loss of the Aboriginal male lineages during the British reign that began in the 18th century.