A suspected Iron Age road, made of timber and preserved in peat for 2,000 years, has been uncovered by archaeologists in East Anglia.

The site, excavated in June, may have been part of a route across the River Waveney and surrounding wetland at Geldeston in Norfolk, say experts.

Causeways were first found in the area in 2006, during flood defence work at the nearby Suffolk town of Beccles. 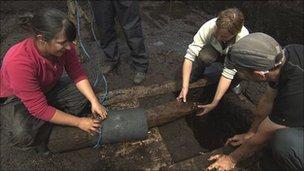 The timber posts have been preserved by peat

It is thought the road is pre-Roman, built by the local Iceni tribe.

Exact dating has yet to be carried out but tree-ring evidence suggests a date of 75BC.

That dates the timber road to more than 100 years before the Roman invasion, which saw the Iceni and their leader Boudicca lead a revolt which threatened to end Roman rule.

In AD60, the Iceni ambushed one Roman legion and sacked Roman settlements at London and Colchester before being defeated.

The timber structures, usually lost on archaeological sites, are marked out by the posts which have been preserved in remarkable detail. As they are dug up, they look almost modern, and it is still possible to clearly see tool marks in the timbers.

University of Birmingham archaeological researcher Kristina Krawiec, from the dig team, said: "Instead of getting post holes, we're getting the posts that would have gone in them. We're understanding more about the technology and skills that went into these sort of things."

John Davies, chief curator at Norwich Castle Museum, added: "This particular track way is very interesting to us because we have tools... which may actually tie in with some of the tool marks and methods of construction we are turning up in the excavation."

Discovered in June last year, the recently excavated timbers form a 4m-wide (13ft) route, running for 500m across wetland right up to the river. There have been two previous linked finds nearby including one on the other side of the river and another running alongside it. 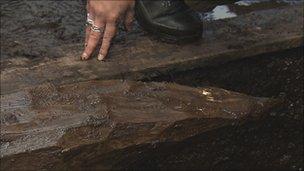 "We perhaps have evidence that these alignments were designed to indicate a crossing or access route to the River Waveney," said University of Birmingham archaeologist Ben Gearey.

As well as providing practical ways of getting across the wet flood plain, the archaeologists believe the roads may have been a way of marking territory to traders and travellers from afar, and spiritual gathering places where the tribe that built them could go to the river to make offerings.

Items such as swords, shields and spearheads are often found in rivers - probably gifts to the gods or to long-dead ancestors.

In a world without roads, rivers were the motorways of the time and it is thought the Waveney formed part of a major metal trading route from Europe.

The timber structures would probably have been an impressive sight to any passing travellers.