A 2,000-year-old square labyrinth has been discovered in Gedimedu, a village 16km from Pollachi, by a team of researchers from the Verarajendran Archaeological and Historical Research Centre, Tirupur. The finding attains significance as the site lies on an ancient trade route that runs from Palakkad Gap to Alagankulam on the east coast via Pollachi, Udumalai, Dindigul, Madurai and Thiruthangal.

With a complicated network of paths, labyrinths have been a fertility symbol associated with many cultures. They represent a unique pattern of consciousness and have been used as a meditation tool and a wish-fulfilling symbol since the Neolithic period. "The labyrinth has one pathway which leads inexorably to the goal from the point of entry. One has to walk through the right path to reach the goal. It is believed that the person who walks through the seven routes correctly will fulfil his wishes," said S Ravikumar, who led the team of researchers comprising K Ponnusamy, S Velusamy and S Sathasivam.

In Gedimedu, the square labyrinth measures 56 feet X 56 feet and is the second largest ever found in India. The most important fact, according to Ravikumar, is that its pattern is the same seen on the Greek Pylos tablets. "The inner walking space of this labyrinth varies from 2.6 feet to 3.6 feet. The entrance is towards the east. Its old name is Seven Round Fort. The pattern is the same that we see on the clay tablet from Pylos in Greece, one of the oldest labyrinths in clay," he said. 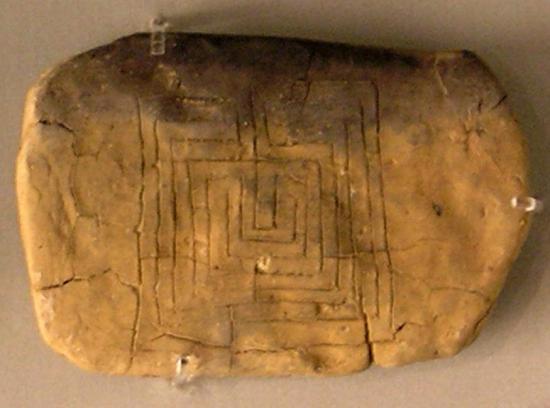 Reverse of a clay tablet from Pylos with a labyrinth motif

Some of the labyrinths were discovered during the Neolithic period, namely Luzzanas (2,500 BC) in the island of Sardinia. The Syrian labyrinths drawn on potsherds during 1,000 BC and many others found in Scandinavian islands can be traced to the Megalithic period. A circular labyrinth discovered during the 6th century AD (post-megalithic period) in the caves of Andhra Pradesh are of great significance. "Labyrinths were seen in the Hoysala period (1,006 to 1,346 AD) and this can be understood from the Abimanyu's Chakravyuha sculpture in the Halabedu Hoysaleswara temple. The popularity of labyrinth lies in the traditional 'kolams' drawn in front of our houses," said K Ponnusamy, another member in the team. A year ago, archaeologist Sugavana Murugan discovered the largest labyrinth in India in Kambainallur near Dharmapuri district of Tamil Nadu.

The team is planning to conduct more studies linking the labyrinth with the ancient trade route. But there is a problem. "As the locals worship deities after constructing a temple on top of the labyrinth, only 60% of the labyrinth is visible now. We have asked them to remove it and clean the surroundings," said Ravikumar. "This place lies on an ancient trade route. Terracotta lamps and semi-precious stones were found from the nearby places. Megalithic period structures like cist burials, cairn circles and hero stones were also found here. The Roman coins obtained from this region belong to the 1st century AD. We are now looking at the possibility of a detailed study of the labyrinth," he said.