At the remains of an ancient metropolis in southern Israel, archaeologists are piecing together the history of a people remembered chiefly as the bad guys of the Hebrew Bible. 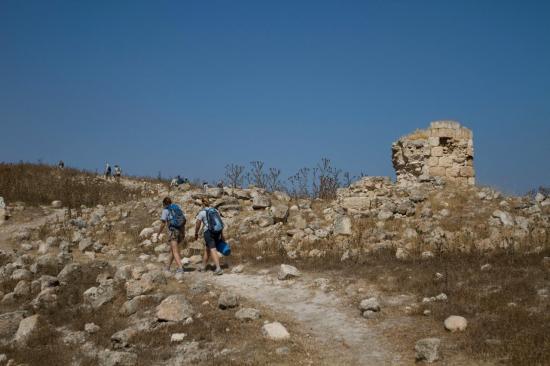 The city of Gath, where the annual digging season began this week, is helping scholars paint a more nuanced portrait of the Philistines, who appear in the biblical story as the perennial enemies of the Israelites.

Close to three millennia ago, Gath was on the frontier between the Philistines, who occupied the Mediterranean coastal plain, and the Israelites, who controlled the inland hills. The city's most famous resident, according to the Book of Samuel, was Goliath — the giant warrior improbably felled by the young shepherd David and his sling.

The Philistines "are the ultimate other, almost, in the biblical story," said Aren Maeir of Bar-Ilan University, the archaeologist in charge of the excavation.

The latest summer excavation season began this past week, with 100 diggers from Canada, South Korea, the United States and elsewhere, adding to the wealth of relics found at the site since Maier's project began in 1996.

In a square hole, several Philistine jugs nearly 3,000 years old were emerging from the soil. One painted shard just unearthed had a rust-red frame and a black spiral: a decoration common in ancient Greek art and a hint to the Philistines' origins in the Aegean. 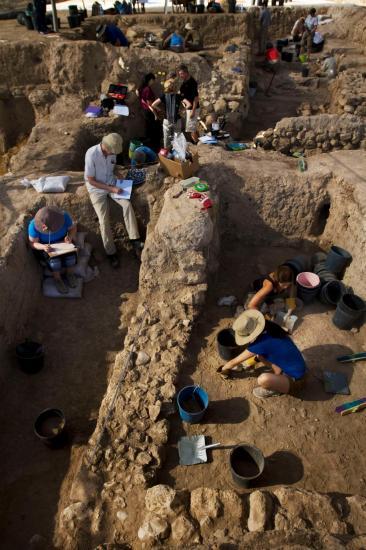 The Philistines arrived by sea from the area of modern-day Greece around 1200 B.C. They went on to rule major ports at Ashkelon and Ashdod, now cities in Israel, and at Gaza, now part of the Palestinian territory known as the Gaza Strip.

At Gath, they settled on a site that had been inhabited since prehistoric times. Digs like this one have shown that though they adopted aspects of local culture, they did not forget their roots. Even five centuries after their arrival, for example, they were still worshipping gods with Greek names.

Archaeologists have found that the Philistine diet leaned heavily on grass pea lentils, an Aegean staple. Ancient bones discarded at the site show that they also ate pigs and dogs, unlike the neighboring Israelites, who deemed those animals unclean — restrictions that still exist in Jewish dietary law.

Diggers at Gath have also uncovered traces of a destruction of the city in the 9th century B.C., including a ditch and embankment built around the city by a besieging army — still visible as a dark line running across the surrounding hills. 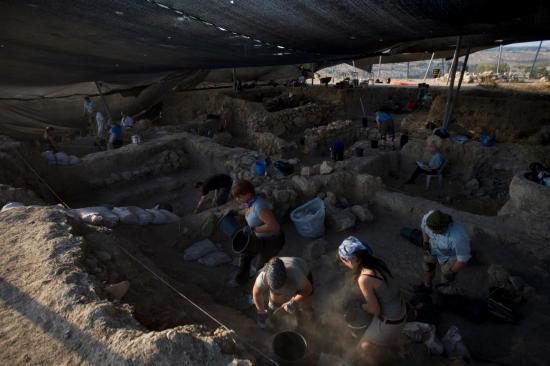 The razing of Gath at that time appears to have been the work of the Aramean king Hazael in 830 B.C., an incident mentioned in the Book of Kings.

Gath's importance is that the "wonderful assemblage of material culture" uncovered there sheds light on how the Philistines lived in the 10th and 9th centuries B.C., said Seymour Gitin, director of the W.F. Albright Institute of Archaeological Research in Jerusalem and an expert on the Philistines.

That would include the era of the kingdom ruled from Jerusalem by David and Solomon, if such a kingdom existed as described in the Bible. Other Philistine sites have provided archaeologists with information about earlier and later times but not much from that key period.

In 604 B.C., Nebuchadnezzar of Babylon invaded and put the Philistines' cities to the sword. There is no remnant of them after that.

Crusaders arriving from Europe in 1099 built a fortress on the remains of Gath, and later the site became home to an Arab village, Tel el-Safi, which emptied during the war surrounding Israel's creation in 1948. Today Gath is in a national park.

An Israeli town founded in 1955 several miles to the south, Kiryat Gat, was named after Gath based on a misidentification of a different ruin as the Philistine city.

The memory of the Philistines — or a somewhat one-sided version — was preserved in the Hebrew Bible.

The hero Samson, who married a Philistine woman, skirmished with them repeatedly before being betrayed and taken, blinded and bound, to their temple at Gaza. There, the story goes, he broke free and shattered two support pillars, bringing the temple down and killing everyone inside, including himself.

One intriguing find at Gath is the remains of a large structure, possibly a temple, with two pillars. Maeir has suggested that this might have been a known design element in Philistine temple architecture when it was written into the Samson story.

Diggers at Gath have also found shards preserving names similar to Goliath — an Indo-European name, not a Semitic one of the kind that would have been used by the local Canaanites or Israelites. These finds show the Philistines indeed used such names and suggest that this detail, too, might be drawn from an accurate picture of their society.

The findings at the site support the idea that the Goliath story faithfully reflects something of the geopolitical reality of the period, Maeir said — the often violent interaction of the powerful Philistines of Gath with the kings of Jerusalem in the frontier zone between them.

"It doesn't mean that we're one day going to find a skull with a hole in its head from the stone that David slung at him, but it nevertheless tells that this reflects a cultural milieu that was actually there at the time," Maeir said.