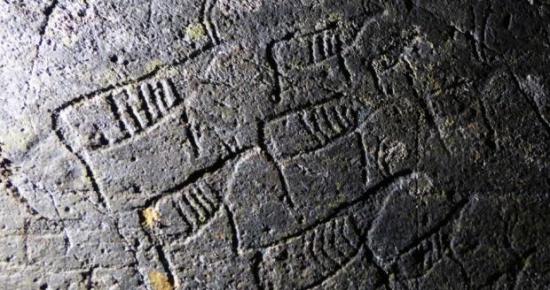 Forty-eight Stone Age petroglyphs include images of a reindeer herd, shown with all the animals moving in the same direction. It’s possible that the artist was trying to say that reindeer migrated this way 7,000 years ago. (Photo: Jan Magne Gjerde, Tromsø Museum - The University Museum)

Six to seven thousand years ago, the road system in Norway was essentially non-existent. That meant Stone Age residents mainly used waterways as they moved from place to place, especially on the hunt.

One area called Gamnes, located between the outlet of a river and the mouth of a fjord that opens onto the Barents Sea, is particularly rich with rock art. There are petroglyphs of reindeer and moose, in herds and alone, with and without young animals.

In general, animals depicted in rock carvings are shown moving in all different directions. But in Gamnes, most of the reindeer have been drawn with their muzzles pointed in the same way.

“The reindeer are following the fjord inland. This may mean that the artist was trying to depict a migration route,” says Anja Roth Niemi, who is project manager for archaeological excavations for the University Museum in Tromsø, UiT – The Arctic University of Norway.

Niemi believes the drawings showed where the animals were located and how they moved around in the area. In short, these were vital messages from one hunter to another.

“Today, reindeer migrate with their calves in the autumn and move from the coast inland. It may have been like that in the Stone Age, too,” she says.

Both moose and reindeer are clear in this digitized version of ancient petroglyphs. (Model: Erik Kjellman, Tromsø Museum - The University Museum)

These rock carvings are the only ones of their kind from the Stone Age in East Finnmark. The drawings were found last summer, and probably date from 5200-4200 BC.

So far, scientists have tallied 48 figures, some of them incomplete, but they expect even more will become apparent when the lichen that covers the rock is removed.

The selection of subjects is not that varied, which is unusual. Petroglyphs from the same period in Alta, also in northern Norway, depict boats, bear, fish and hunting scenes.

Here there are only reindeer and moose. Why would Stone Age people draw only these animals here?

Researchers are just beginning to figure out the answers to these questions, but Niemi and her colleagues have their theories.

Excavations of northern settlements from this period show that people were more sedentary. It’s likely that only smaller groups went out to hunt, following animals as they switched grazing areas with the seasons.

Their central location made these particular petroglyphs visible from several directions. Sea levels were higher then, and when the hunters cruised by in boats they could hardly fail to spot the drawings on the coast.

“The rock art would have been very visible to people who travelled by. It seems like this was an important landmark on the journey,” says Niemi.

She thinks the lack of variety in the images says something about the importance the place had for the people who used it. Bones from the many Stone Age settlements in the area suggest that residents of coastal areas hunted reindeer. And inland, moose were important.

Perhaps the drawings were a kind of databank. This may have been a place where hunters exchanged information on animal behaviour.

The next step is for the researchers to examine the petroglyphs more carefully to figure out more about the techniques these Stone Age artists used. They wonder if the artists might be the same as those who created the rock art that is found in Alta and on the Kola Peninsula in Russia.

In fact, the petroglyphs are similar to those in Alta, a UNESCO World Heritage Site, suggesting that there could have been contact between groups from the East and West.

Ironically, the archaeologists only found the petroglyphs by accident last year during the course of a dig of a Stone Age settlement and a Sami turf hut. During a lunch break as the archaeologists were walking between excavations, the drawings suddenly became visible when the afternoon light fell obliquely on the rock.

Now the archaeologists have to document the petroglyphs thoroughly before construction in the area starts, so the art can be replicated elsewhere.

Niemi hopes that this special find may inspire walkers to look a little more closely at the rocks they pass. Even the untrained eye can detect petroglyphs, she says.

“Look for lines that seems a bit misplaced. We think there may be several more drawings in the area, and it would be fantastic to find them,” she said.