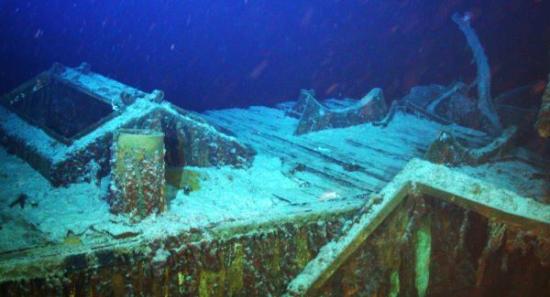 The skylight over the engine room and a lifeboat cradle on the SS Gairsoppa. Picture: AP Photo/Odyssey Marine Exploration

For many, the uncharted depths of the ocean floor represent Earth’s final frontier — a dark and dangerous realm with infinite possibilities. Over the centuries, the hunt for sunken treasure has captured imaginations and inspired dreams of adventure and discovery. Last week’s haul of 61 tons of bullion from the SS Gairsoppa, a British cargo ship that sank in 1941 about 300 miles off the Galway coast, served to underline the riches still awaiting discovery in the murky depths.

Odyssey Marine, the Florida-based specialists in deep-water exploration and salvage, recovered almost 100% of the insured silver from the ship. In a series of recovery operations that began in 2012, the company has recovered 2,792 silver bars from the ship, weighing over 1.8m troy ounces. All of the bars are of .999 high-purity silver, and stamped with the brand HM Mint Bombay.

The SS Gairsoppa was part of a convoy of ships sailing from India to Britain during World War Two when it ran low on fuel in stormy weather, and tried to divert to Galway. Carrying a cargo of pig iron and tea, as well as the silver, the Gairsoppa broke off from the convoy and set a course for Galway. Spotted by a German submarine hunting Atlantic convoys, the ship took a direct hit from a torpedo and sank in less than 20 minutes, killing more than 80 crew on February 17, 1941. Three crew members escaped in a lifeboat and reached Cornwall two weeks later, but two of them died trying to get ashore. Second officer Richard Ayres became the only survivor of the ill-fated ship.

The wreck of the Gairsoppa was discovered at a depth of 15,400 feet — 3,000 feet deeper than the wreckage of the Titanic. As part of the operation, still and video imagery from the site were used to confirm the identity and condition of the ship. Photographs revealed clear details, including a ladder leading to the forecastle deck, a waist-high compass used by the helmsman, and the hole in the steel hull blown open by the torpedo. The silver, representing a world record recovery both in its size and depth, was taken ashore in Bristol and moved to a secure location in Britain.

In 2012, the British Department for Transport awarded Odyssey, through a competitive tender process, the exclusive salvage contract for the cargo of the SS Gairsoppa. Under the agreement, Odyssey will retain 80% of the net salvaged value of the silver, with the remainder going to the British Treasury.

“We have accomplished a world-record recovery at a depth never achieved before,” said Mark Gordon, Odyssey president. “We’re continuing to apply our unique expertise to pioneer deep-ocean projects.”

Much of the recovery was conducted using the Seabed Worker, a remotely-operated submersible capable of delving down to a depth of 5,000m. “With the shipwreck lying approximately three miles below the surface of the North Atlantic, this was a complex operation,” commented Greg Stemm, Odyssey CEO. “Our capacity to conduct precision cuts and successfully complete the surgical removal of bullion from secure areas on the ship demonstrates our capabilities to undertake complicated tasks in the very deep ocean.”

The technology will now be applied to other shipwreck projects being scheduled by the company.

“Our success on the Gairsoppa marks the beginning of a new paradigm for Odyssey in which we expect modern shipwreck projects will complement our archaeological shipwreck excavations.”

The company will next begin work on the SS Mantola, a British steamer lost in 1917 and carrying an estimated 600,000 ounces of silver insured under the UK War Risk insurance programme.

The excitement and danger inherent in the recovery of silver from the Gairsoppa was filmed at all stages of the project and will soon be seen on the Discovery Channel.

“Part of our mission is to share the excitement of what we do with the general public in conducting recovery operations on a shipwreck that was over three miles deep — deeper than even the Titanic and something that had never been accomplished before,” said Gordon. “Our team successfully accomplished the record-breaking recovery of 48 tons of silver bullion — the heaviest and deepest recovery of precious metals in history. Seeking and discovering shipwrecks is fascinating and challenging, and to witness the trials and triumphs of the crew hundreds of miles offshore makes gripping television,” he added. 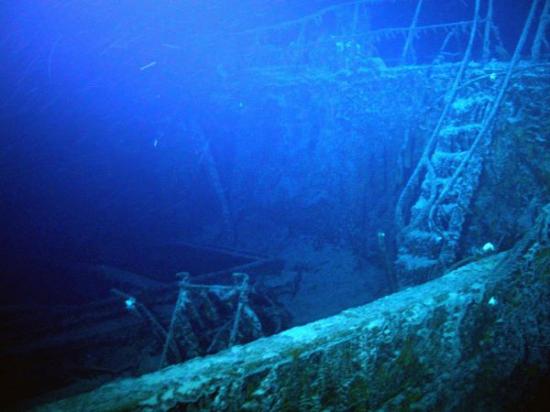 An Odyssey Marine Exploration photo of a ladder leading up onto the forecastle deck of the SS Gairsoppa shipwreck, approximately 4,700 metres deep.

Odyssey Marine is a world leader in deep-ocean exploration, searching the globe’s oceans for both historic shipwrecks once thought lost forever and modern vessels sunk with significant amounts of valuable metal commodities. The company also explores for deep-ocean minerals like seafloor sulphides, pollymetallic nodules and phosphorites. “No one knows the deep ocean better than our world-class team of researchers, scientists and technicians,” says Gordon. “We’ve surveyed and mapped more ocean seabed than many governments and spent tens of thousands of hours on shipwreck and mineral deposit sites using advanced robotic technology, while, more importantly, applying the highest scientific standards.”

“Although we depend on technologies that have been developed at great expense in other fields, primarily the military, oil and telecommunications industries, we use our unique expertise to modify and customise these technologies specifically to locate shipwrecks and mineral deposits and to conduct resource assessments, archaeological excavations, and cargo recovery thousands of feet deep.”

Odyssey’s operations have discovered hundreds of shipwrecks ranging from third-century BC Punic sites to U-boats, and casualties from both World Wars. In 2003, they discovered the Civil War-era shipwreck of the SS Republic, recovering over 51,000 coins and 14,000 artifacts from a site 1,700-ft below the surface. In 2007, the company announced the recovery of over 500,000 silver and gold coins weighing 17 tons from a Colonial-era deep-ocean site code-named Black Swan. In 2008, Odyssey discovered what is considered one of the most significant shipwrecks in British history, HMS Victory, Admiral Sir John Balchin’s flagship, lost in 1744. The recent discovery and successful recovery of the SS Gairsoppa underlines the role technology plays in salvage, with vastly-improved sonar equipment, global positioning systems and advanced deepwater robots capable of scouring the world’s oceans for booty.

UNESCO estimates there are some three million shipwrecks worldwide, with billions of dollars in sunken treasures and priceless knowledge that can be recovered from the depths of the ocean, including vast amounts of naturally occurring copper, silver, gold and zinc deposits.

“The majority of the world’s ocean floor has not yet been explored,” said Gordon. “We know more about the surface of the moon than we know about the deepest parts of the oceans. It’s exciting to be working at depths like these and to be among the pioneers of deep ocean exploration.”

Earlier this year, Odyssey Marine published a series of scientific papers on its discovery and excavation of the Buen Jesús Nuestra Señora del Rosario, one of the vessels sailing with the Tierra Firme treasure fleet bound for Spain in 1622. Sank in a hurricane off the Tortugas, south of the Florida Keys, the wreck was originally excavated in 1990 and 1991.

The shipwreck was discovered in 1989 at a depth of 405 metres. Nearly 17,000 artifacts, ranging from gold bars to silver coins, pearls, ceramics, beads, glassware, animal bones and seeds were recovered from the site during the excavation.

“The Tortugas shipwreck dates to the Golden Age, the dazzling world of creativity epitomised by El Greco, Velázquez and Cervantes,” said Dr Sean Kingsley, director of Wreck Watch International. “Rather than staring at paintings, the Buen Jesús lets us dive into the world of the past and study an extraordinary moment in time.”