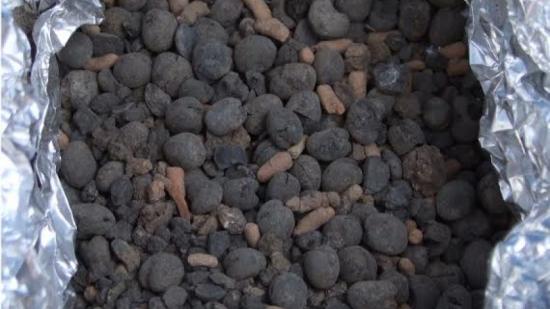 Charred 10,000 year-old fava beans. An amount like that would have been extremely difficult to gather from wild plants, indicating the legume had been domesticated. - Jacob Vardi, Israel Antiquities Authority
Israelis mix them into their hummus. Egyptians eat them mashed for breakfast. It turns out both are following a proud tradition: A new study strongly suggests that humans living in the Galilee first domesticated fava beans more than 10,000 years ago, eating them as a staple well before grain began to be cultivated in the area.
Fava beans, also known as broad beans, are the only crop known to have been domesticated in what is today Israel, according to a paper published Tuesday in Scientific Reports, the online, open access version of the top science journal Nature.
The discovery adds a new chapter to the story of how humans went from being hunter-gatherers to sedentary farmers during the Neolithic Age, ultimately leading to the rise of complex civilizations. It could also help track down the elusive wild fava, a potential boon for agronomists seeking sturdier varieties better able to withstand climatic extremes and parasites.
The search for the wild legume
While scientists have been quite successful in tracing the domestication of wheat and other grains to specific areas ranging from Turkey to Iran, they had been less lucky with legumes, said Valentina Caracuta, an archaeobotanist who led the study for the Weizmann Institute of Science in Rehovot.
One problem is that unlike grains, domesticated legume seeds have no visible characteristics that clearly distinguish them from wild varieties, she explains.
To solve the mystery of the fava bean's domestication, then, scientists needed to rely on indirect evidence.
The smoking bean
Then in recent years, archaeologists from the Israel Antiquities Authority found thousands of charred fava beans in three neighboring Neolithic sites in the Lower Galilee: Ahihud, Nahal Zippori and Yiftah’el.
The remains were radiocarbon dated to around 10,200 years ago, providing some of the oldest samples of favas found in a human context, says Elisabetta Boaretto, a nuclear physicist who heads the Max Planck-Weizmann Centre for Integrative Archaeology and Anthropology.
But had they been lovingly cultivated or just randomly snapped up in the wild?
The sheer quantity of beans the scientists found indicates that the plant had been domesticated, says Caracuta. Wild legumes tend to stay dormant in the soil, with only a few occasionally sprouting a plant, she explains. To obtain as many beans as found in the Galilee settlements, by logic, humans would have had to select and cultivate non-dormant seeds.
As for their service as a staple in the Neolithic diet, the fact that only a handful of grain seeds was recovered at the sites is further proof that the inhabitants relied on fava beans as a key ingredient of their diet. Lentils and other legumes were also found amongst the ancient food stashes. 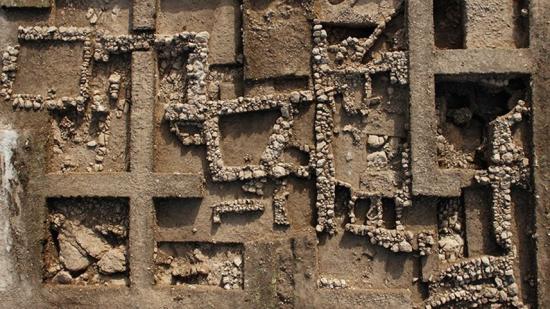 An aerial view of the remains of the Neolithic village at Ahihud. - Skyview, courtesy of the IAA
The higher protein content of beans, which makes them an ideal meat substitute, may have unwittingly contributed to this food choice, Caracuta said.
“In other parts of the Fertile Crescent, grains had already been domesticated for more than a thousand years,” she noted. “But here they invested in producing legumes." No evidence of such intense legume cultivation has been found elsewhere in the Near East, she adds.
A few dozen fava beans from roughly the same period were recovered at Tell el-Kerk, a site in Syria, she adds - but they were never carbon dated. Also, the small quantity does not support a hypothesis that they were cultivated, as opposed to serendipitously found.
It is hard to tell what happened to those early farmers in the Galilee, who had carefully stashed their fava supplies in storage pits and under the plastered floors of their huts.
The fact that all the seeds at the sites were burned has led some archaeologists to speculate that they were purposefully destroyed by hostile forces who attacked the villages.
“But it could also have been an accidental fire, an attempt to kill parasites, or something else,” said Boaretto, the nuclear physicist. “Ironically, we get more information when there is war or tragedy, because generally we only study material that is burned: organic material that isn’t charred quickly decomposes.”
The discovery of fava farming complicates the picture of the agricultural revolution, says Jacob Vardi, one of the Israel Antiquities Authority archaeologists who worked on the sites. “Domestication is usually linked to the northern Levant, but here we have evidence of it happening in the south and in a very site-specific way.” 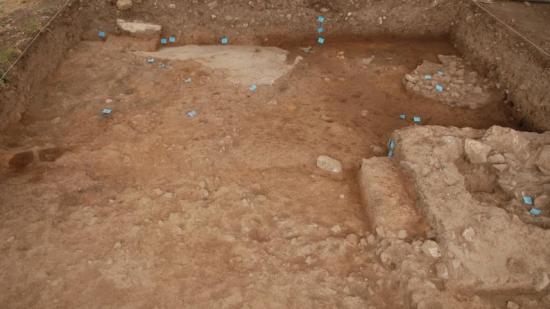 The Neolithic site at Yiftah'el. - Weizmann Institute
Beyond its historical value, the study should be helpful to botanists and agronomists who have so far failed to identify the wild form of “vicia faba” – the scientific name of the plant.
If it has not gone extinct, the wild ancestor of today’s beans may be found in the area where it was first domesticated, Caracuta said.
Locating it would be important because most species – including humans – display their greatest genetic diversity in the area where they first evolved. Discovering the wild fava could lead to finding varieties with greater resilience to parasites, or climate fluctuations - hopefully making them more resistant to climate change).
Another intriguing point is favism - an often fatal allergy to these beans, caused by a genetic mutation that is found mostly among Middle Eastern populations. Not a few Israelis suffer from it.
“Is it a coincidence that favism is prevalent in the area where the plant was first domesticated?” Caracuta wondered. “It’s a question to be explored.”