Image shows the musical interlude in the marriage rite between Mesopotamian king and goddess, archaeologists say. 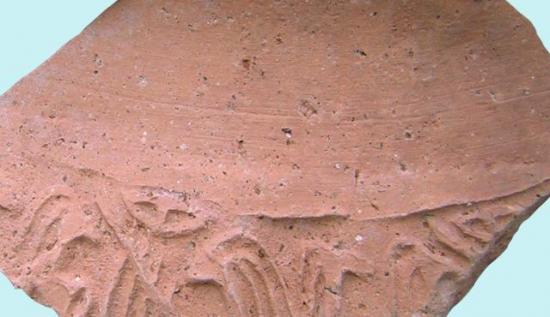 A unique seal impression found half a century ago in the western Galilee bears the oldest-known depiction of music ever found in Israel, according to a new interpretation of the find.

Archaeologists now believe the scene shows the musical part of a ritual dating back 5,000 years, of the "sacred marriage" between the Mesopotamian king and a goddess, whose role would have been played by a priestess.

Found in Early Bronze Age ruins in Beit Haemek in the 1970s, the impression was made using a cylinder seal rolled along the surface of clay before it was fired, creating repeating designs. It shows two standing women and one sitting, who is playing a musical instrument that is, apparently, a lyre.

"We identified it as a lyre by searching through artworks and observing the remains of actual lyres found in Mesopotamia," Dr. Yitzhak Paz told Haaretz. As for the identification of the scene as part of the sacred marriage ritual between the king and goddess, while that is an interpretation, it too is based on precedent.

The ceremony would have been a long affair that included a banquet that featured music and dancing. Following that, the king and goddess would "meet" and, it is believed, consummate their "marriage".

"This is the first time it is definitely possible to identify a figure playing an instrument on a seal impression from the third millennium BCE," the Israel Antiquities Authority stated. Other "cultic" impressions from that era depict dancing figures or feasting in which men and women are shown facing each other, in the rite just before a sexual encounter, the IAA says.

Recreation of the impression, showing a lyre player and two standing women. By: Nimrod Getzov, courtesy of the Israel Antiquities Authority

Many seal impressions from the Early Bronze Age portray the sacred marriage rite, suggests Prof. Pierre de Miroschedji of the Centre National de la Recherche Scientifique, though this is the only one found at Beit Haemek. Many other seal impressions were found at the site but they contain the usual geometric forms, says Paz.

The discovery had been made during an archaeological survey in the Western Galilee in the 1970s, by Dr. Rafi Frankel 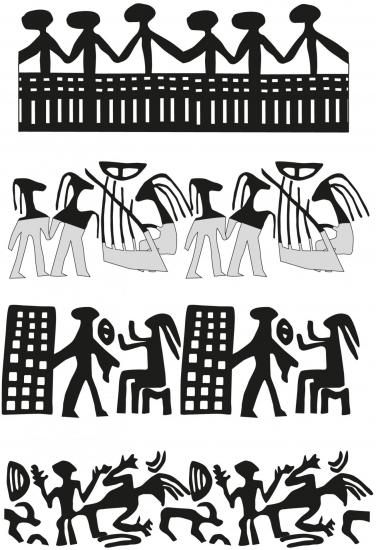 Reconstruction of the different ceremonial rites, based on fragments of impressions found in Israel and Jordan. Prepared by Nimrod Getzov, courtesy of the Israel Antiquities Authority