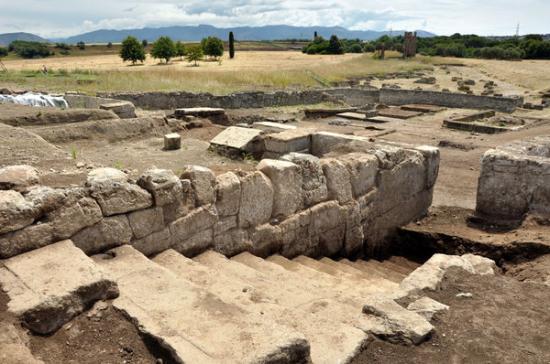 Granted that Rome was not built in a day, the unresolved question among scholars has been just how long did it take. How early, before Julius Caesar came, saw and conquered, did Romans begin adopting a monumental architecture reflecting the grandeur of their ambitions? 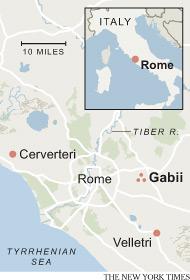 Most historians agree that early Rome had nothing to compare to the sublime temples of Greece and was not a particularly splendid city, like Alexandria in Egypt.

Any definitive insight into the formative stages of Roman architectural hubris lies irretrievable beneath layers of the city’s repeated renovations through the time of caesars, popes and the Renaissance. The most imposing ruin of the early Roman imperial period is the Colosseum, erected in the first century A.D.

Now, at excavations 11 miles east of Rome’s city center, archaeologists think they are catching a glimpse of Roman tastes in monumental architecture much earlier than previously thought, about 300 years before the Colosseum. They have uncovered ruins of a vast complex of stone walls and terraces connected by a grand stairway and surrounded by many rooms, a showcase of wealth and power spread over an area more than half the size of a football field. They say this was most likely the remains of a public building in the heyday of the city-state Gabii, or possibly an exceptionally lavish private residence.

The discovery was made last summer by a team of archaeologists and students led by Nicola Terrenato, a professor of classical studies at the University of Michigan and a native of Rome. At the end of this summer’s dig season, Dr. Terrenato said last week in a telephone interview from Rome, about two-thirds of the complex had been exposed and studied to “tell us more about how the Romans were building at that formative stage” — between 350 B.C. and 250 B.C.

Dr. Terrenato noted that the findings appeared to contradict the image of early Roman culture, perpetuated by notables like Cato the Elder and Cicero, “as being very modest and inconspicuous.” It was said that this did not change until soldiers returned from the conquest of Greece in the second century B.C., their heads having been turned by Greek refinements and luxuries.

“Now we see the Romans were already thinking big,” he said.

The Gabii dig site is a gift to archaeologists. Not only was the city close to Rome, with many ties, but most of its ruins were buried and never built over after the city’s decline in the second and third centuries A.D. The building complex is on undeveloped land in modern-day Lazio.

At the time, Rome had surpassed Gabii in size, but some historians think the neighboring city could have exerted an influence on the Romans. Previous excavations by the Michigan group, beginning in 2007, had uncovered a significant part of the city, including private houses, wealthy burials, city walls and a temple. Of possibly more importance, Dr. Terrenato suggested, the recent research shows that people were practicing some degree of urban planning at Gabii.

Scholars of ancient history and other archaeologists were either unfamiliar with the Gabii findings or cautious in their comments. Richard J. A. Talbert, a historian at the University of North Carolina at Chapel Hill and scholar of ancient geography in the Mediterranean world, visited the Gabii excavations last year. Dr. Talbert noted that in later Roman tradition, Gabii was seen as “a source of ideas and culture.” But he added, “We really don’t have enough evidence yet to say how influential Gabii was on Rome in these early periods.”

Christopher Ratté, the director of the Kelsey Museum of Archaeology at Michigan, said the excavation was part of a concentrated examination of the social environment in central Italy before the rise of Rome as a world power. “It has been quite a surprise,” he said, “to find that it was still possible to break new ground like this in a region that has been so well researched.”

The Gabii Project, supported in part by the National Endowment for the Humanities and in collaboration with the Italian Archaeological Service, had explored and mapped the more than 170 acres of the ancient city, which was built on the slopes of an extinct volcano where the crater had become a lake. Then the archaeologists encountered the elaborate building complex. Dr. Terrenato said he was immediately struck by the size of the stone blocks in the retaining wall on the slope inside the complex. Each one weighed thousands of pounds.

“This was like Lego construction,” he said. “They were stacked one on top of each other without any glue binding them together. This is the only technique they had access to, and it must have been the desire for this kind of grand construction that drove them to the invention of mortar about 125 years later.”

The researchers also admired some of the architectural details: rows of stone pillars, courtyards and terraces covered in mosaic tiles in geometric patterns, a 21-step staircase cut into bedrock. They said this showed that the people were beginning to experiment with modifying their natural environments — cutting back the natural slope and creating a retaining wall.

“All this only whetted our appetites,” Dr. Terrenato said as he looked ahead to next summer’s continued excavations and a hoped-for extension of the project beyond 2014.