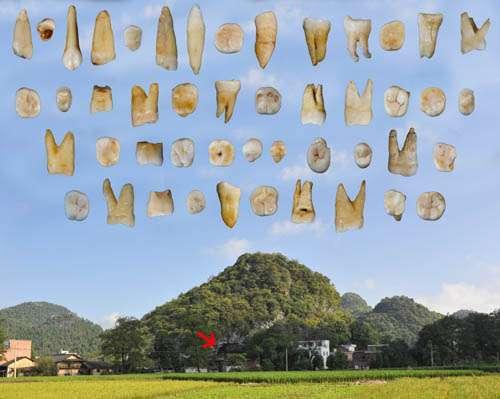 The hominin record from southern Asia for the early Late Pleistocene epoch is scarce. Well-dated and well-preserved fossils older than 45,000 years that can be unequivocally attributed to Homo sapiens are lacking. In a paper published October 15 online in Nature, Dr. LIU Wu, Institute of Vertebrate Paleontology and Paleoanthropology (IVPP), Chinese Academy of Sciences, and his international team announced the discovery of human teeth between 80,000 and 120,000 years old from the newly excavated Fuyan Cave in Daoxian, southern China, and provided the earliest evidence of fully modern humans outside Africa. This discovery indicated that Homo sapiens trekked into Asia far earlier than previously known and much earlier than into Europe, providing important evidence for the study of dispersal routes of modern humans.
The Fuyan Cave, located in Tangbei Village, Daoxian County, Hunan Province, southern China, is part of a large multi-genesis pipeline-type karst system that contains several connected and stacked caves, and covers an area of more than 3,000m2. From 2011 to 2013, systematic excavations yielded 47 human teeth and an abundant fossil mammalian assemblage. The investigation and excavations were conducted at three regions in the cave, regions I, II and III. Four clear stratigraphic layers were consistently identified in the whole excavated regions, with a total thickness of more than 250 cm. 47 human teeth and an abundant fossil mammalian assemblage were unearthed from layer 2 of region I and region II.

The hominin and most of the faunal elements consist exclusively of teeth, and many of them present root alterations mostly due to the effects of calcium dissolution and some rodent gnawing. The mammalian fossil assemblage from the Daoxian site is typical of Late Pleistocene in southern China, and is composed of 38 species including 5 extinct large mammals such as Ailuropoda baconi, Crocuta ultima, Stegodon orientalis, Megatapirus augustus and Sus sp. Study's co-lead author WU Xiujie, a Paleoanthropologist of the IVPP, said the 47 human teeth came from at least 13 individuals. 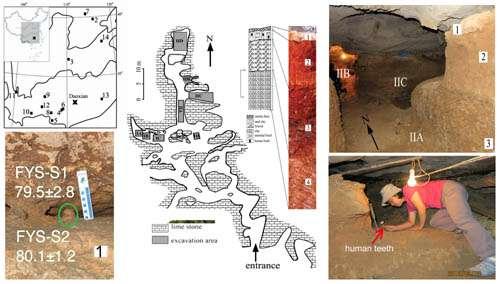 Fig.2 Geographical location and stratigraphy of the Daoxian site. Credit: LIU Wu
The Daoxian teeth are small and they consistently fall within H. sapiens variability, sad LIU Wu, co-lead author of the study. They are generally smaller than other Late Pleistocene specimens from Africa and Asia, and closer to European Late Pleistocene samples and contemporary modern humans. Both the crown and the root of Daoxian teeth show typical morphologies for H. sapiens, with simplified occlusal and labial/buccal surfaces and short and slender roots. The presence of moderate basal bulging as well as longitudinal grooves in the buccal surface of canines, premolars and molars from other Late Pleistocene samples such as Xujiayao, Huanglong Cave, Qafzeh or Dolni Vestonice make Daoxian teeth morphologically closer to middle-to-late Late Pleistocene and even contemporary human samples.
"Our data fill a chronological and geographical gap that is relevant for understanding when H. sapiens first appeared in southern Asia. The Daoxian teeth also support the hypothesis that during the same period, southern China was inhabited by more derived populations than central and northern China. This evidence is important for the study of dispersal routes of modern humans", said LIU Wu.

Some studies have investigated how the competition with H. sapiens may have caused Neanderthals' extinction. Notably, although fully modern humans were already present in southern China at least as early as 80,000 years ago, there is no evidence that they entered Europe before 45,000 years ago.

"Our species made it to southern China tens of thousands of years before colonizing Europe perhaps because of the entrenched presence of our hardy cousins, the Neanderthals, in Europe and the harsh, cold European climate", said Martinón-Torres, co-lead author of the study and a paleoanthropologist of University College London, "In addition, it is logical to think that dispersals toward the east were likely environmentally easier than moving toward the north, given the cold winters of Europe." It may have been hard to take over land Neanderthals had occupied for hundreds of thousands of years.

"The Daoxian teeth place our species in southern China 30,000 to 70,000 years earlier than in the eastern Mediterranean or Europe", said LIU Wu, "We hope our Daoxian human fossil discovery will make people understand that East Asia is one of the key areas for the study of the origin and evolution of modern humans," Liu said.

This work was mainly supported by the grants from the Chinese Academy of Sciences, and National Natural Science Foundation of China.