From sticks to stones—getting a grip on the human genus

Artist’s interpretation of an Australopithecus family. Probably the first hominin to make stone tools, according to new research. Credit: Wikimedia Commons, CC BY-SA
2015 has already been an amazing year for human evolution science.

We've witnessed an uncanny convergence of discoveries on the beginnings of the human genus, Homo, and all that it implies for understanding the evolution of a range of human characteristics, including culture and tool making.

Yet, the implications of this research run much deeper than most people would immediately think. Let me explain.

This year's major discoveries touch on a number of major historical themes in human origins research, spanning decades of investigation. The implications are broad, involving one of the key theoretical pillars of human origins that explains, among other things:

Many elements of this 'package' of anatomical and behavioural traits probably began with the emergence of Homo around 2.3 million years ago. Actually, the discovery of a new Homo jaw from Ethiopia dated 2.8 million years old, which I wrote about in March, pushes this back a further half million years.

If we're honest, I guess, we should have expected the deconstruction of this central pillar of human evolution theory any time now, as there have been hints it was coming for quite a while.

2015 just happens to be the year when momentum has reached a point, through serendipitous discoveries, where its time to reassess the old model and forge ahead with a new one.

Ever since 1964, when Louis Leakey, Phillip Tobias and John Napier announced Homo habilis, and in so doing, redefined Homo, our genus has been linked to culture and tool making.

The nomen habilis was suggested by Raymond Dart, as it means "able, handy, mentally skillful or vigorous" in Latin.

Stone tool making, indicating the beginnings of culture, a fine 'precision grip' of the hand, and the start of a long-term trend in brain enlargement, were all linked to Homo and its then newest earliest member, Homo habilis.

Before this time, membership of the human genus was based mostly on the idea of a "cerebral Rubicon" in which a species had to have an estimated brain size of 700 cubic centimetres or more to belong.

Some features have been added to the package since 1964, such as the use of fire and cooking, and endurance running.

Ever since tool making was linked exclusively to Homo there have been dissenters.

At Olduvai Gorge in Tanzania, the Leakey's themselves found tools, dubbed the "Oldowan" Industry, associated with the "Nutcracker Man" or Paranthropus bosiei as well as Homo habilis.

In the 1960s, one of Leakey's own protégés, Jane Goodall, showed that chimpanzees also used tools in the wild. 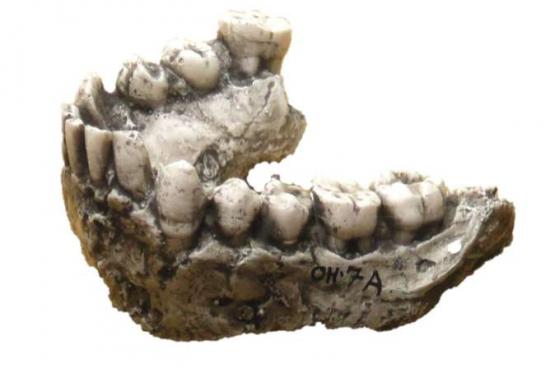 Olduvai Hominin 7 is the type specimen for the species Homo habilis.
Only last week, Jill Pruetz at Iowa State University and her team reported that chimpanzees in Senegal used wooden spears for hunting, being the only example of a living non-human species to do so.

Over the last couple of decades we've also learnt that very different kinds of animals use tools, from ants to octopuses, crows to otters, and dolphins to monkeys and apes.

In South Africa, stone tools have also been recovered from various ancient cave sites along side 2 million year old Homo and Paranthropus fossils.

Studies of the hand bones of Paranthropus by Randy Susman in the 1980s showed their anatomy was similar to humans: although, we have no idea if they had the motivation, need or smarts to make tools.

In 2010, cut-marks on large mammal bones made by early hominins using stone tools were reported from Ethiopia, dating to 3.39 million years ago, by Shannon McPherron and her team.

This pushed tool use well beyond Homo and Paranthropus to Kenyanthropus or even Australopithecus.

Last week, Sonia Harmand and her team at Stony Brook University announced at a conference in California that they'd found stone tools on the shores of Lake Turkana in Kenya dating to around 3.3 million years old.

This discovery pushes the oldest tools back a whopping 800,000 years!

This new tool industry differs from the Oldowan in being much chunkier, including tools weighing as much as 15 kilograms: according to a report in this week's Nature by Ewen Calloway (the work has yet to be published in a scientific journal).

And, just this week, a new study published by Thomas Feix from Yale University and co-investigators proposed that the East African species Australopithecus afarensis living between roughly 3 and 4 million years ago may also have had a human-like hand grip.

This follows on from research reported in January by Matthew Skinner from the University of Kent and his team showing that the southern African species, Australopithecus africanus, may also have routinely made and used tools.

All of these discoveries call into question the whole Homo package: if tools were made by hominins like Australopithecus, then they can't be associated with obligate bipedalism, brain enlargement, speech and language or the use of fire.

These are features we associate only with members of Homo.

Over the last few decades, the surprising finding of tool use by arthropods, molluscs and many species of chordate (including birds and mammals), has thrown a massive spanner in the works for scientists wrestling with the notion of "culture." 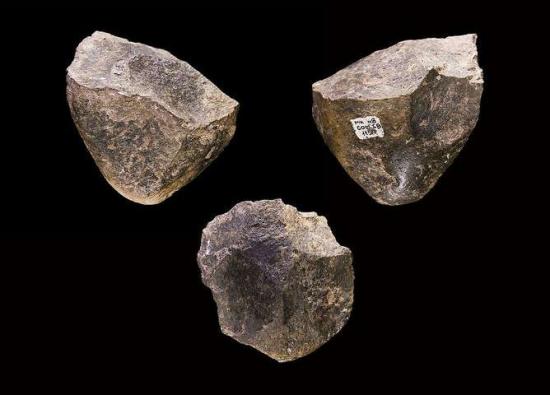 Oldowan stone tools from Melka Kunture in Ethiopia dated to around 1.7 million years old. Until this latest discovery this tool type, associated with Homo habilis, was the earliest known. Credit: Wikimedia Commons
In one camp – normally biologists – the definition of culture has been expanded to include most or all instances of non-human tool use.

In the other – comprising mostly archaeologists – it has been narrowed to include only behaviours seen in Homo sapiens and some of our early ancestors.

But, are there any unique features in the way humans, and our extinct biped relatives, made and used stone tools?

We humans stand out in making an extraordinary diversity of tools, including ones that are highly complex, comprising many components that interact in complicated ways, with some tools based in experimental research or deep insights about nature.

Just think about your car or smart phone as an example of high-tech tool.

Archaeologists have had a hard time wrestling with the problem of the uniqueness of human culture, especially in the face of the complexity of ape cultures, but as well as the use of tools across very diverse kinds of animals.

For example, passerine birds and most primates are known to use similar numbers of tools and in similarly complex situations. Yet, humans do things differently.

The archaeologists Iain Davison, from the University of New England, and William McCrew, Cambridge University, believe they have pinned down from a behavioural perspective what humans do that is so distinctintive.

They believe we are far more creative, generating new kinds of behaviours from those learned from other people, and that human stone tool making has provided a "niche" for the coopting of tools and tool-making procedures across different contexts.

Such ideas prove extremely difficult to test from archaeology alone though.

We now seem to be at the point in scientific history where the package of features normally associated with the beginnings of Homo no longer seems valid, after 50 years of their use.

Many of the hallmarks of the human genus have been convincingly found with other, much more ancient hominin species, and some even with other kinds of animals.

At the same time, finding the evolutionary origins of the very real 'gulf' that exists between us and other life – one that is admittedly getting smaller each year – seems to be an increasingly difficult challenge for science.