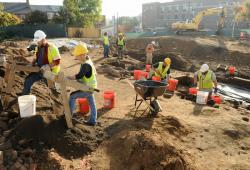 Cultural Resources Inc. archaeologists at the courthouse site found artifacts in the cellar of a house destroyed in the Battle of Fredericksburg. At right, from top: a theater token, a brass number from a Union uniform, and porcelain shards. (PHOTOS BY ROBERT A. MARTIN/THE FREE LANCE–STAR)

Call it “Building X.” What remains of it lay, buried and long forgotten until now, beside today’s Fredericksburg City Hall where a new courthouse will soon rise. Now, thanks to intense scrutiny by archaeologists and local researchers in recent weeks, you can add this once-substantial row house to the casualties of the Battle of Fredericksburg. The Civil War’s most lopsided Confederate victory, won 150 years ago this December, not only killed or wounded nearly 18,000 men, it erased the brick structure from the town’s landscape. 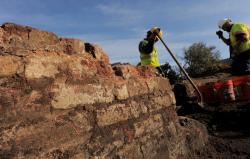 CRI archaeologists Berek Dore and Richard Freedman (right) pause last week while excavating around the central chimney of the antebellum building foundation discovered beside Fredericksburg City Hall. The research team believes Union soldiers lived in the structure during and/or after the Battle of Fredericksburg on Dec. 13, 1862.

Owned by Fredericksburg businessman Peter Goolrick, the building on Lot 38 was assessed at $1,000 in 1860, local researcher Nancy Moore said. It vanishes from the tax records by 1865. That, combined with before-and-after photo analysis by National Park Service historian John Hennessy, clearly shows that the war brought down the building, which burned.

“The two images in 1863 of that part of town, taken from two slightly different angles, both don’t have a building where you would expect one to be,” Hennessy, chief historian of Fredericksburg and Spotsylvania National Military Park, said in an interview. “In my view, that supports [the archaeologists’] interpretation that it was destroyed sometime in association with the battle.” The building’s lingering presence was unknown until about four weeks ago, when evidence was uncovered in the archaeological dig the city funded before the $35 million courthouse is built. It had lain under Thom Savage’s law office, entombed beneath a concrete slab, for decades.

Now the building foundation and its contents will be the subject of laboratory analysis—and a forthcoming report to the city—by Cultural Resources Inc., the Glen Allen firm whose archaeologists swiftly excavated the courthouse site.

Archaeologists uncover carbonized heart-pine floorboards of the cellar floor in the house, which burned and collapsed, sealing a thick layer of artifacts that prove its occupation by Union soldiers.

Taft Kiser, CRI’s project archaeologist, said the dig will provide material for further research for many years. But evidence already uncovered puts a group of Union troops in that building around the time of the battle, and provides clues about them and their activities. The archaeologists found metal insignia from soldiers’ uniforms that hint at their unit. “It’s going to be Company C, and a regiment with a ‘2’ in its name,” Kiser said. “Eventually, someone will figure out which regiment it was. And there may be some soldier diarist who was in the house and left an account.”

A brass numeral–believed to from the uniform of a Union soldier–is one of many artifacts from army uniforms and gear found on the site.

City Councilman Matt Kelly, who followed the dig closely and brought various experts to watch it unfold, doesn’t think it was the 20th Maine because Col. Joshua Lawrence Chamberlain’s famous regiment was bivouacked over on Caroline Street. After talking with Hennessy and park historian Eric Mink, Kiser said he thinks the troops took shelter in the building’s cellar during the battle because—due to the site’s topography—it seemed safer from Confederate artillery fire than more exposed locations in the town’s business district.

The artifacts indicate the soldiers cooked beef, drank whiskey and Scottish beer, opened ration cans, dipped their pens in glass and stoneware inkwells, and smashed plates. Buttons, dozens of bullets, various uniform parts and dozens of tobacco-pipe bits were found, among hundreds of items. The cellar’s heart-pine floorboards, carbonized by the fire, were left mostly intact. When one town resident returned after the battle, “walking through this area, he saw the houses were torn apart,” Kiser said. “They had no windows and no doors. And there were bowls everywhere, either full of water or blood. It’s kind of tragic.”

Moore and Barbara Willis, the Virginiana Room archivist at Central Rappahannock Regional Library, connected Goolrick—the town’s prewar mayor—to the row house by consulting tax records digitized by the University of Mary Washington’s Department of Historic Preservation. Then Moore and her husband, Roger Engels, searched deeds at today’s courthouse and found a plat for the neighboring property. Goolrick’s parcel was immediately adjacent, “right where the foundation showed up on the dig,” Moore said. Goolrick, one of the area’s richest men, lived in the Caroline Street building that now houses the Irish Eyes store. His son built Goolrick’s Pharmacy, which still stands on Caroline.

CRI Laboratory Director Emily Lindtveit holds a theater token, made of copper and bearing the word “PERFORMANCE,” excavated from the future courthouse’s site in downtown Fredericksburg.

As for Building X, its brick and sandstone foundation will be gone soon, removed to make way for the new courthouse. Over the next two weeks, crews will install shoring for full excavation of the property, said Lawrence W. Tressler II, project manager for Downey & Scott LLC, the Warrenton firm overseeing courthouse construction. Kiser said that as earth is removed, the archaeologists will return briefly to examine the contents of a well that may date to the early 1700s.

Some of Building X’s Aquia stone, the same kind used to build the White House and U.S. Capitol, will be preserved, courthouse project manager Robert Antozzi said Monday. Eventually, the dig’s artifacts will be returned to the city for permanent storage, and some may be put on public exhibit, Kelly said. Among them is one real treasure. It came from the other side of the courthouse property, from a privy that served George Gravatt’s livery stable. It’s an English creamware chamber pot that bears the image of the Enterprise, a U.S. Navy schooner involved in the Barbary Wars—and the first command of naval hero Stephen Decatur Jr. The Americans’ victorious campaign gave rise to the famous phrase in the Marine Hymn: “From the Halls of Montezuma, to the Shores of Tripoli.”

Made between 1803 and 1817, when the U.S. conflicts with the Barbary pirates were big news, the pot’s imagery includes “a beautiful, 16-star U.S. flag, a black transfer print,” Kiser said. “It’s amusing. This is the time of the War of 1812, and you have potters in Staffordshire, England, making a U.S. patriotic item and marketing it here.” “This is something we’re going to be looking at forever, because it’s going to be a symbol of the city and of the archaeology here,” he added.

On the last full day of their excavation, CRI archaeologists sketch, photography and measure part of Building X’s brick and sandstone cellar. The city intends to save the Aquia stone blocks from the site; those at top right were the ornamented, streetfront steps to the house owned by former mayor Peter Goolrick. (CLINT SCHEMMER/THE FREE LANCE-STAR)

Kelly said a lot was learned from the courthouse dig, and more remains to be discovered.;“The city needs to take better advantage of these opportunities to learn about Fredericksburg history, and to encourage further research that will attract more visitors to our city,” he said. “We need to start discussing an archaeological ordinance that will put the framework in place to achieve these goals.”