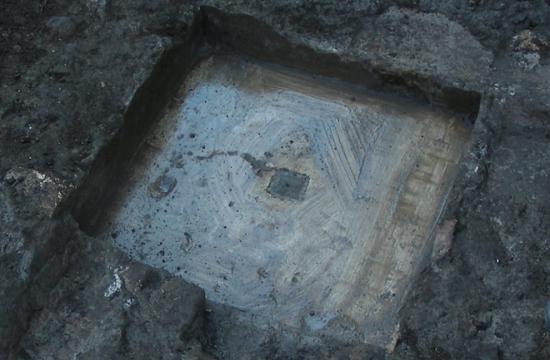 Italian researchers have unearthed a marble benchmark which was once used to measure the shape of Earth in the 19th century.

Called Benchmark B, the marker was found near the town of Frattocchie along one of the earliest Roman roads which links the Eternal City to the southern city of Brindisi.

Placed there by Father Angelo Secchi (1818-1878), a pioneer of astrophysics, the marker consisted of a small travertine slab with a metallic plate in the middle. The plate featured a hole at its center.

“The hole was the terminal point of the geodetic baseline which run in the ancient Appian Way near Rome, between the tomb of Cecilia Metella, a daughter of a Roman consul, and a tower near Frattocchie,” Tullio Aebischer, a cartographical consultant at the department of mathematics and physics of Roma Tre University, told Discovery News.

Geodesy is a science that deals with the size and shape of the Earth and the determination of exact positions on its surface. Essentially the figure of the Earth is abstracted from its topographical features — and a baseline is the fundamental requirement for computing the triangulation of a region.

In order to determine the extension of the “triangle,” it is necessary to know the exact distance between two points: A, the starting point, and B, the ending point.

In this way, networks of triangulation can be spread over entire countries and continents.

While Benchmark A, the starting point of the baseline, was found in 1999 in front of the Cecilia Metella mausoleum, nothing was known of the Benchmark B’s whereabouts.

“We found it after a long archival research and a georadar survey. The discovery will allow us to precisely verify the ancient measurements with modern GPS technologies,” Aebischer said. 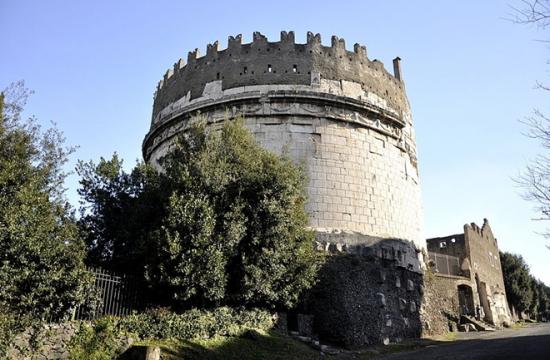 The tomb of Cecilia Metella where the first marker was found in 1999. Credit: Paul Hermans/Wikimedia Commons

“The measurements along the Appian Way were part of surveys which began in the middle of the 18th century and spread all over Italy, in Europe, especially in France and Lapland, and in South America. The aim was to measure the shape of the Earth,” Aebischer said.

In 1735 the Académie Française proposed the verification of Isaac Newton’s theory about the shape of the planet Earth. Newton (1642-1727) predicted the Earth to be an oblate ellipsoid, thus several scientific expeditions were carried in the attempt to assess the length of one degree of a meridian measured at different latitudes.

In 1750 Pope Benedictus XIV commissioned the measurement of the length of the meridian arc stretching from Rome to Rimini and passing through St. Peter’s dome.

To do so and to produce a geodetic triangulation of the Papal States, the Jesuits Christopher Maire (1697-1767) and Roger Boscovich (1711-1787) measured a baseline between the tomb of Cecilia Metella and an anonymous ruin near the town of Frattocchie.

“The area was chosen because of its smooth and straight ground. In addition, in a geodetical baseline, the markers A and B must be visible from the other points of the triangulation. Here we had a mausoleum and a ruined tower,” Aebischer said.

Maire and Boscovich’s results were heavily criticized by the French engineers in the beginning of the 19th century, and a long scientific dispute began.

The quarrel was started by Secchi a century after the publication of the Jesuits’ results. The astronomer re-measured the Boscovich geodetical base between November 1854 and April 1855.

The newly discovered benchmark will most likely remain in its original place just as benchmark A remains hidden under a manhole in the middle of the road at the Cecilia Metella mausoleum.

“These are historical markers and must be valued as an important heritage for the knowledge of a territory,” Aebischer said.