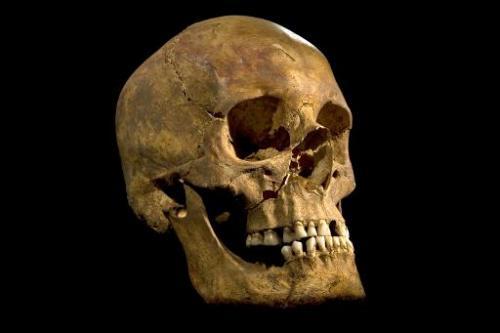 An undated handout picture released on February 4, 2013 from the University of Leicester shows the full skull of the skeleton of King Richard III found at the Grey Friars Church excavation site in Leicester
King Richard III likely perished at the hands of assailants who hacked away pieces of his scalp and rammed spikes or swords into his brain as the helmetless monarch knelt in the mud.

So suggests a report, published Wednesday, that in dry forensic prose exposes the horrific demise of one of English history's most controversial monarchs.

It backs anecdotal evidence, made famous by Shakespeare, that Richard was unhorsed before he met his doom.

Bringing together 21st-century science and sketchy knowledge of 15th-century history, the analysis provides a chilling tableau of the brutality of warfare in late mediaeval England.

Richard was killed in the Battle of Bosworth Field in Leicestershire, central England, on August 22, 1485.

The monarch's death was the culmination of a three-decade war for the throne, bringing the curtain down on the three-century dynasty of his Plantagenet clan, and ushering in the Tudors.

"The most likely injuries to have caused the king's death are the two to the inferior aspect (lower part) of the skull—a large sharp-force trauma possibly from a sword or staff weapon, such as a halberd or bill, and a penetrating injury from the tip of an edged weapon," said Guy Rutty, a pathologist at the University of Leicester.

A halberd was a mediaeval battle axe with spiked point, and a bill was a hooked-tip blade on the end of a pole.

"Richard's head injuries are consistent with some near-contemporary accounts of the battle, which suggest that Richard abandoned his horse after it became stuck in a mire and was killed while fighting his enemies," said Rutty.

The study, published in The Lancet medical journal, used X-ray computed tomography (CT) for a microscopic analysis of a skeleton found in 2012 under a car park at a former church.

After being lost for five centuries, researchers identified the remains as Richard's, backed by DNA analysis and radiocarbon-dating.

The new paper documents nine injuries to the head at or shortly before death, and two to the torso that were likely inflicted post-mortem.

The two blows that probably killed the king likely came from a sword or spike driven into the brain at the base of the skull.

They are consistent with the victim having been "in a prone position or on its knees with the head pointing downwards," the study's authors wrote.

Non-fatal injuries included three cuts to the top of the skull that would have sliced off much of the scalp. A knife or dagger was stuck right through his face, from right cheek to left.

"Richard's injuries represent a sustained attack or an attack by several assailants," said Sarah Hainsworth, a professor of materials engineering at the university.

Assuming that he had been wearing his royal armour, two injuries to the trunk must have been inflicted after Richard's body was stripped, the team said.

One was a blow to the right tenth rib with what was probably a fine-edged dagger. 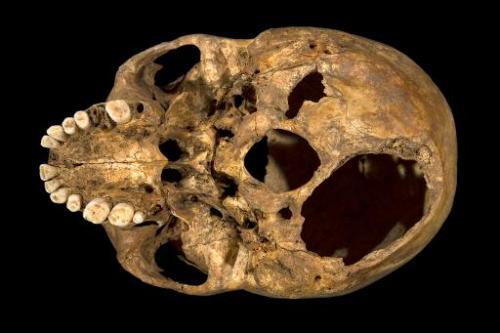 An undated handout picture released on February 4, 2013 from the University of Leicester shows the base of the skull of king Richard III with the two potentially fatal injuries

The other was a thrust, probably by a sword driven upwards through the right buttock that would have penetrated his bowels and other soft pelvic organs—a blow that would have caused fatal bleeding had he been alive.

Without any soft tissue to analyse, the scientists looked at sometimes tiny marks left on the bones—cuts, abrasions, punctures and so on—and compared them with the known impacts caused by the weapons of the time.

The gory reconstruction of his death is heavily dependent on assumptions about the wearing of armour and the loss of helmet, but chimes with several contemporary accounts.

One version of events penned the year after Richard's death, said his naked body was slung over his horse like a saddlebag and brought to Leicester. 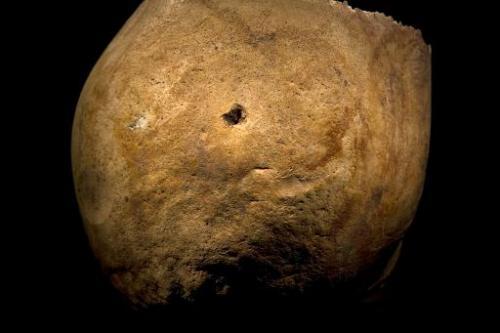 An undated handout picture released on February 4, 2013 from the University of Leicester shows the penetrating injury to the top of the head of king Richard III's skull

"Insults" were directed at the corpse by the crowds—which could be when an onlooker inflicted the pelvic wound by thrusting a blade through the king's buttock, according to the new investigation.

Further mutilation of his corpse would have been stopped—to display his dead body as a trophy, the defeated king had to be recognisable.

Richard died aged 32 after only two years on the throne. Contemporary accounts described him as generous and a good monarch, but his reputation was blackened by the victorious Tudors.

In Shakespeare's play Richard III, the king's spinal curvature was transformed into a hunchback, and his character was murderous and hungry for power.